On a low budget? Check out the 10 best phones under $100 to buy this month

Smartphones can be said to be the best thing that have happened to tech ever since its inception. You can argue that but you would agree that almost 70% (if not higher) of work you do on PCs, Desktop, Laptops etc., can now —with ease— be done on your smartphone. Yeah?

However, quite sadly, the prices of smartphones have been bizarrely climbing up the price ladder. The iPhone X presently sells between $1,000 to $1,400, the Samsung Galaxy Note 8; roughly $1,000 and many more. Quite a number of smartphones from many brands are already hitting the $1,000 mark … and this leaves many questions unanswered: what happens to people who want to use a decent smartphone but do not have such high budget? Well, that’s where budget smartphones come in.

Budget smartphones are majorly devicde that —price-wise— fall into the <$100-$250 price bracket. Under the headers below, we have highlighted 10 smartphones that costs less than (and exactly) $100 for smartphone lovers who want a decent smartphone (either for personal use or as a gift), their individual prices, and links to buy them at the lowest available price.

Released mid-2017, the Oukitel U22 remains one of the best under $100 smartphone I’d recommend to anyone. The device was one of the earliest quad-camera —2 cameras both on the rear and on the front— to launch in the smartphone space in 2017. 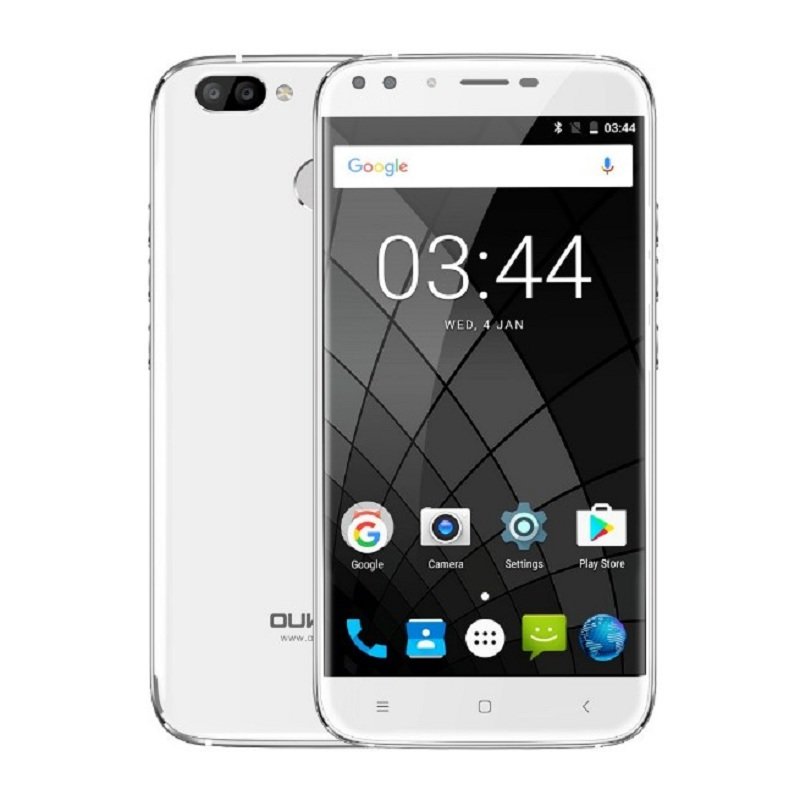 With the U22, design is a plus. The is beautiful on the outside as you get a mix of metal and plastic on the outside. And yeah, do not have the flawed opinion that because the Oukitel is cheap, it won’t cut the mustard in terms of performance. The devices packs 2GBN of RAm which works in tandem with the MediaTek MT6580 SoC and Mali-400 GPU to give optimum performance and smooth launching & running of applications.

The Oukitel U22 presently retails for $87 on GearBest and you can purchase via the button below.

BUY THE Oukitel U22 FROM GearBest at $87

Homtom is that Chinese smartphone manufacturer that is synonymous with churning out cheap and affordable with decent quality specifications. The Homtom S12 was released towards the end (December) of 2017 and is way far below $100. The S12 is covered entirely in plastic and comes in 3 colour variants – White, Blue and Black. 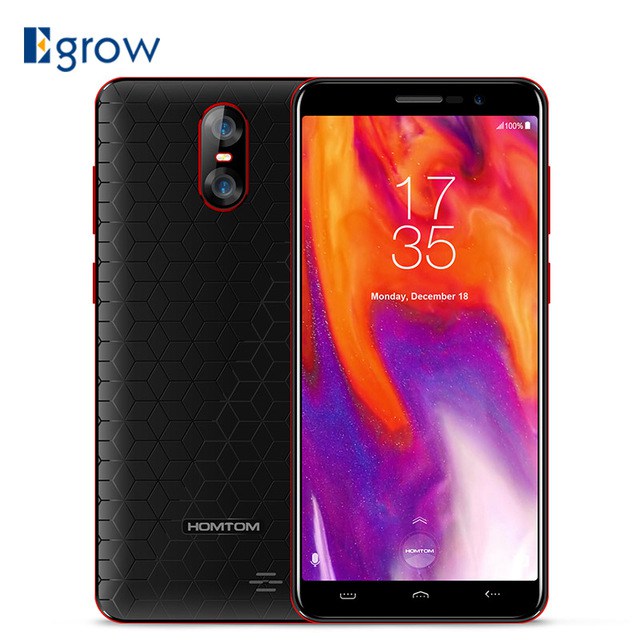 On the inside, the Homtom uses the same chip as the (above) Oukitel U22 but has half the storage of the U22 i.e 1GB RAM and 8GB of internal storage (with 32GB micro SD card support). Though little, they would get the basic work done. I should also mention that the Homtom S12 comes with dual camera set-up on the rear and one lens on the front in charge of selfie duties.

For only $55, you can own a unit of the Homtom S12. Buy the device below via the button. 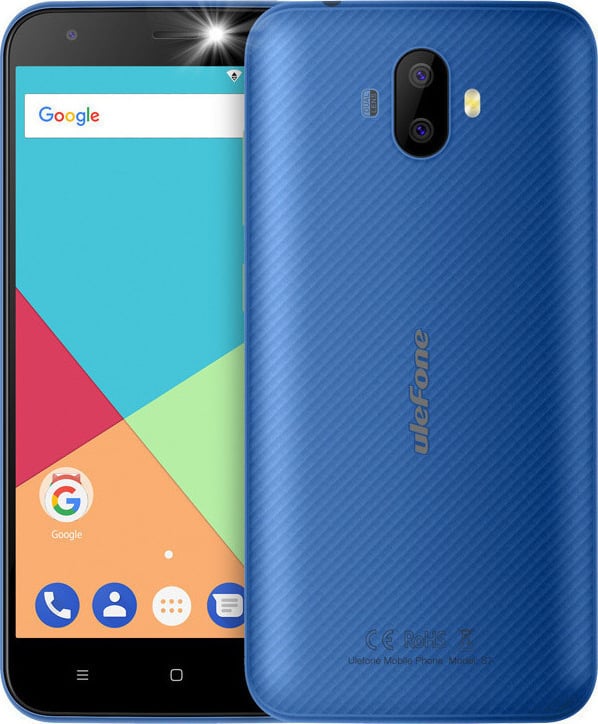 This one’s from Ulefone, another China-based OEM that makes phones for almost every price bracket and of every type: from high-end smartphones, to mid-range and budget phones.
The Ulefone S7 is very much like the Homtom S12 – 5.0-inch display, 1GB of RAM, 8GB built-in memory, all-plastic body, MediaTek MT6580 SoC, and dual camera on the rear. The S7 pretty much comes with features that makes it worth even more than it cost.

For $54 only, the Ulefone S7 seem like a perfect smartphone to purchase if you are on a tight budget or if you need a present to gift your 10-year old son/daughter. The Ulefone S7 as a gift is perfect!

BUY THE Ulefone S7 FROM GearBest at $54

Only around $75, you get features including a decent sized 5.0-inch display with HD (1280 x 720 pixels) resolution, a security sensor placed on the rear for fingerprint identification, 2 slots for SIM card, dual 8MP & 5MP lens on the rear, and 16GB built-in storage space on the Leagoo KIICAA Power. 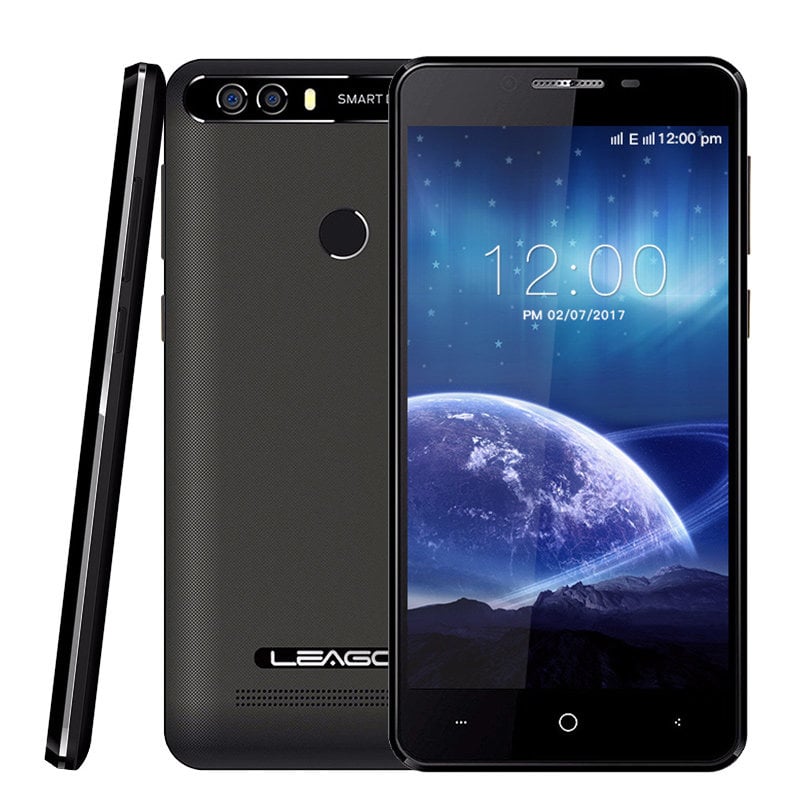 The device also runs on the budget MediaTek MT6580 SoC and 2GB of RAM for unruffled multitasking. The major highlight of the Leagoo KIICAA Power, however, is the battery capacity – as evident in the device’s name. The KIICAA Power comes with a 4,000mAh battery juice that can give between 24 – 48 hours of usage time. This is the device with the highest battery capacity on this list. So if you consider battery big of a deal when buying your next smartphone below $100, you should buy the Leagoo KIICAA Power.

BUY THE Leagoo KIICAA Power FROM GearBest at $75

If you are a big fan of Xiaomi and their products, and you wish to own one of their products but have below $100, then the Xiaomi Redmi 5A is a perfect match. 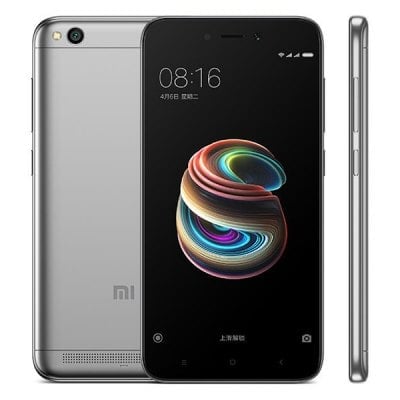 The Redmi 5A is one of the best budget device to ever come out from the OEMs factory. The device has a very premium metal body that doesn’t easily give it away as a cheap smartphone. If you love taking pictures, the 13MP camera on the rear and 5MP lens on the front will do justice to your images. Xiaomi powered the Redmi 5a by a mid-range Snapdragon 425 SoC, 2GB RAM and 16GB ROM (expandable up to 128GB via the second SIM slot). The device is kept up and running by a 3,000mAh battery and runs Xiaomi’s MIUI v9.0 which is based on the Android Nougat v7.1 operating system.

The Xiaomi Redmi 5A can be purchased for $96 via the button below.

BUY THE Xiaomi Redmi 5A FROM GearBest at $96 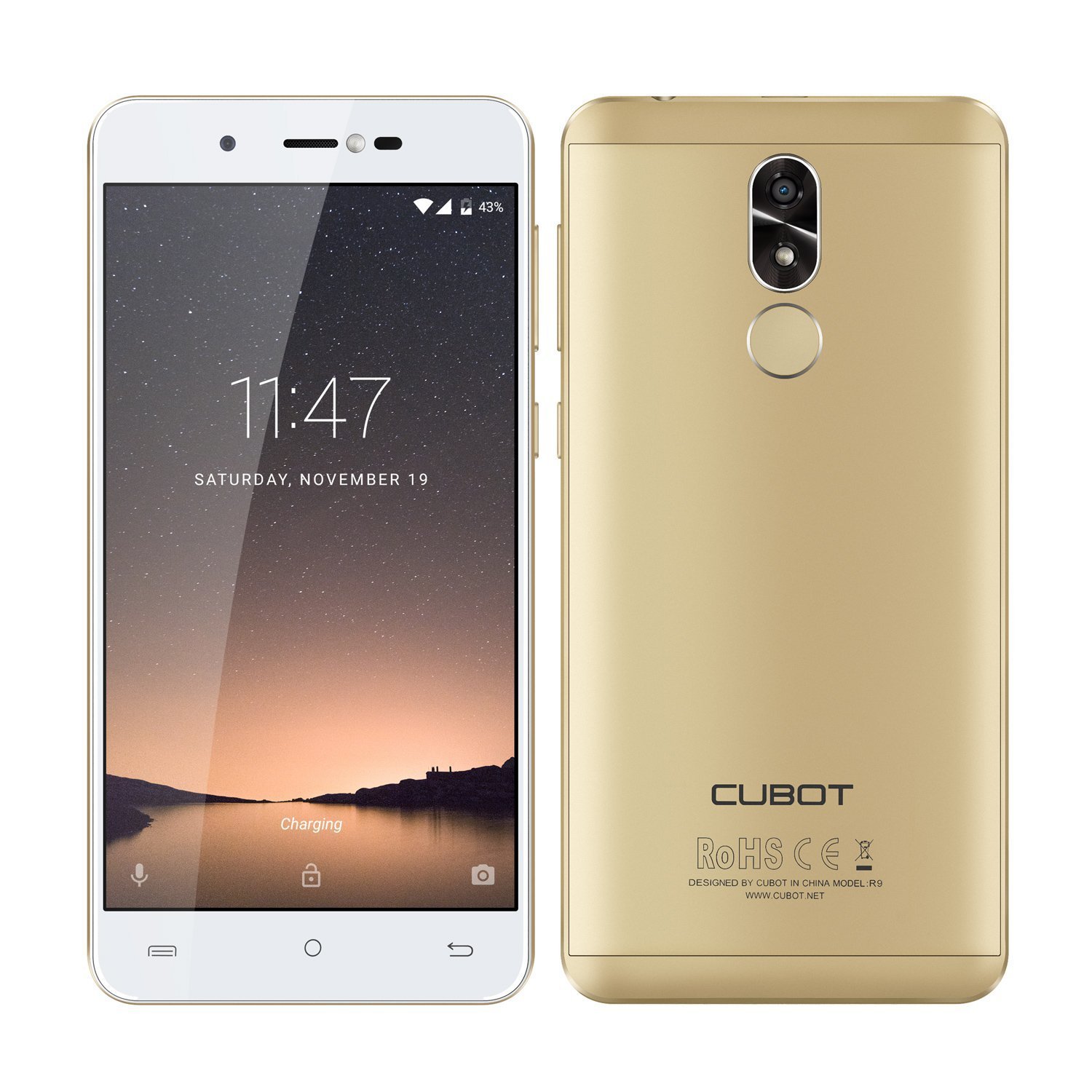 The Cubot R9, like the Redmi 5A, comes with a pretty looking body that makes it look like a smartphone worth more than $100. The Cubot R9 shares a lot in common with the Xiaomi Redmi 5A, save for the difference in chip used on them. The R9 uses the MediaTek MT6580 SoC which comes with the Mali 400 GPU and Quad-core Cortex-A7 processo that clock a frequency up to 1.3GHz.
Other highlight specs of the $82 Cubot R9 include; 5.0-inch HD display, 13MP rear camera, 5MP selfie camera, 2GB RAM, Android Nougat v7.0 OS, and 2,600mAh replaceable battery.

BUY THE Cubot R9 FROM GearBest at $82

The AllCall Rio S is another budget mid-range smartphone that also sells below $100. The device has one of the best aesthetic I’ve set eyes on phones in the under $100 price bracket. The curved edges on the left and right edges of the glass covering the display are lovely. 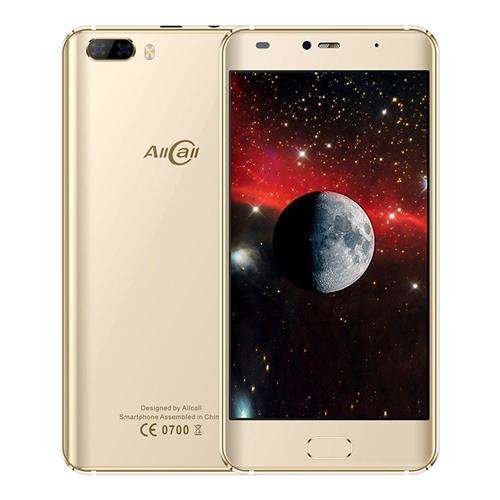 On the front, there is a big 5.5-inch HD display and a 2-megapixels camera in charge of capturing average selfies. The device is powered by a quad-core MediaTek MT6737 SoC found on even pricier devices, 2GB RAM, 16GB on-board memory and a non-removable 3,200mAh battery. For less than $100, you also get to the enjoy —firsthand— dual camera experience .. thanks to the 8-megapixels and 2-megapixels lens on the rear.

The AllCall Rio S presently sells for $85 and can be purchased via the link below.

BUY THE AllCall Rio S FROM GearBest at $85

Surprised to see another AllCall smartphone on the list? Don’t be. AllCall is a Chinese smartphone manufacturer that prides itself as makers of super affordable smartphones. 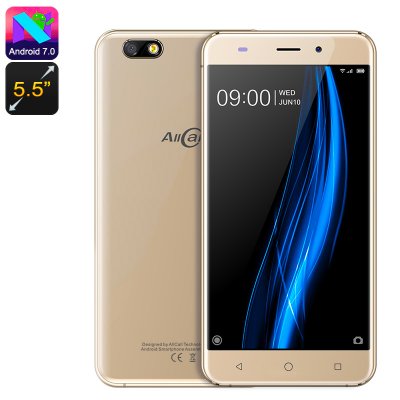 The AllCall Madrid was released in November 2017, and despite being below $100, it packs some pretty decent specs for the price it sells for. For only $55 (like the Homtom S12), you get a 5.5-inch HD display, 1GB of RAM, 8GB internal storage, 8MP rear camera with LED flash, MediaTek MT6580 SoC and a non-detachable 2,600mAh Lithium Polymer battery.
You can purchase the AllCall Madrid smartphone through the link below

BUY THE AllCall Madrid FROM GearBest at $55 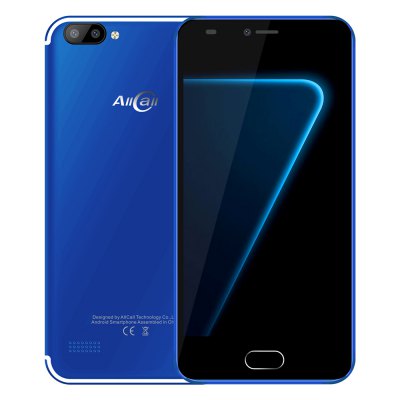 Like many of the above-mentioned devices, the AllCall Alpha is powered by a 1.3GHz quad-core MediaTek MT6580 processor. Storage-wise, the Alpha comes ships with 1GB of RAM and 8GB on-board memory while it runs the Android Nougat v7.0 operating system out-of-the-box.

Buy the AllCall Alpha on GearBest at $57 below.

BUY THE AllCall Alpha FROM GearBest at $57

With a finely polished metal body and a huge battery capacity, the Ulefone S8 Pro is another perfect under $100 smartphone to buy if you want a phone on a small budget. 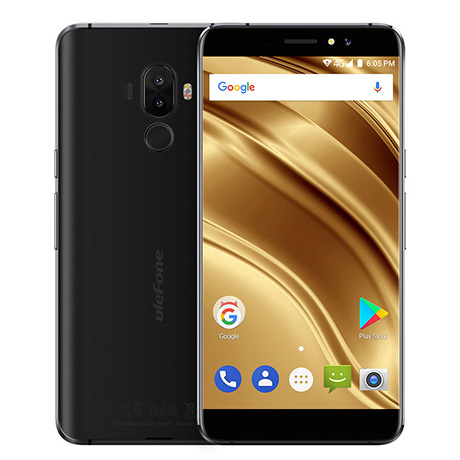 The Ulefone S8 Pro is an upgrade to the low-priced Ulefone S8 but even with better specs. However, despite the increase in the device features, ther was only slight increase in its price. The S8 Pro comes with dual camera on the rear -13-megapixels and 5-megapixels primary and secondary lens respectively.

Under the hood, the device packs 2GB RAM, 16GB of ROM and Mali T720 GOU that works in tandem with the MediaTek MT6737 SoC for fluid and fast processing of information. The display is 5.3-inch, somewhere between the regular 5 and 5.5-inches screen sizes. The fingerprint sensor on the rear can store up to 5 fingers and the 3,000mAh battery can give a talk-time of 13 hours.

The Ulefone S8 Pro is available for purchase at only $96 on GearBest and you can buy below.

BUY THE Ulefone S8 Pro FROM GearBest at $96