TCL launched the Alcatel 5V smartphone last month with a notch design and dual camera on the back side at an affordable price tag $199.99. Now the company unveiled the new smartphone, called Alcatel 7. It is cheaper than the Alcatel 5V and exclusively on MetroPCS. The Alcatel 7 comes with similar specs to the Alcatel 5V on board. 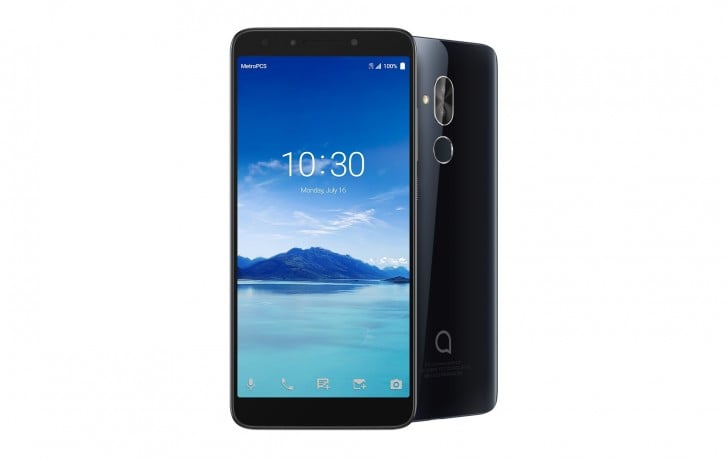 Alcatel 7 comes with 6-inch LCD display that supports 1080 x 2160 pixels of resolution and offers 18:9 aspect ratio. The phone offers around 76.5% screen to body ratio and supports around 402 PPI density. On the screen, there is a Dragontrail Glass for protection layer that protects it’s from accidental scratches. Unfortunately, there is no notch design on top of the display like the Alcatel 5V.

The phone powered by Octa-Core Cortex-A53 CPU which clocks at 2.5 GHz under the hood along with the MediaTek MT6763T Helio P23 chipset. On the board, it has 2 Gb of RAM and 32 GB internal storage along with micro SD card slot which supports up to 128 GB external storage. For the better graphics experience, there is Mali-G71 MP2 GPU. It runs on Android 8.1 Oreo operating system out of the box.

There are dual vertically placed camera sensors on the back side along with LED flash. On the back side, there is a 12-megapixel main camera with f/2.2 aperture and 5-megapixel secondary camera with a f/2.4 aperture for artificial background blur. On the front side, there is an 8-megapixel camera with a f/2.8 aperture for selfies and video calls. The selfie camera of the phone comes with its own LED flash. You can also use the front camera to unlock the phone because it supports face unlock feature which introduced as a FACEKEY by the company. There is a fingerprint scanner too on the rear side, just below the cameras.

Alcatel 7 packed with Non-removable Li-Ion 4000 mAh battery inside the body. At the announcement event, the company claimed that it will deliver 28 hours talk time backup and 10.5 hours of video streaming. The phone also supports fast charging charger feature. It will available only in black color. In terms of connectivity, 4G VoLTE, 3.5mm audio jack port, Wi-Fi 802.11 b/g/n, Wi-Fi Direct, hotspot, Bluetooth 4.0, GPS with A-GPS, micro USB 2.0 and more. It has accelerometer and proximity sensors.

The company launched the Alcatel 7 at $179.99 price tag. The MetroPCS also offers unlimited LTE and port-in credit. You can also buy the phone at $129 price with a new line of service or an upgrade of your plan if you already a subscriber of the T-Mobile subsidiary.