It looks like a Shenzhen-based Chinese smartphone manufacturer ready to launch its next flagship smartphone, called OnePlus 6T. Before the official announcement, the phone is available on Amazon India for pre-order. According to the listing, The 6T will available for pre-order from the date of the official unveil and users are able to pre-order the phone till 30th October. Which means the phone shipping could start from the 1st November. 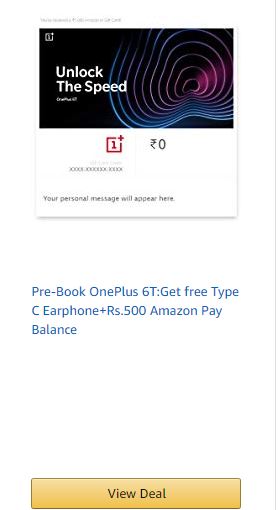 Recently, the company officially confirmed that there is no 3.5 mm audio jack port present in OnePlus 6T. So, if you want to use an earphone in the 6T smartphone, you need Type-C earphone. Which make sense for the company to bundle the Type-C earphones for those who pre-order the OnePlus 6T.

However, the is no much details about the specs of the phone. It expected to come with 6.4-inch Optic AMOLED display with Full HD+ resolution and 19.5:9 aspect ratio. There are also speculations that the phone will have teardrop notch design on top of the display and Corning Gorilla Glass protection layer on the screen that protects it from minor scratches. The OnePlus 6T will come with a similar design as the Oppo’s R17 Pro.