Here we have listed all the list of Android 9.0 Pie Supported Elephone devices. Find out whether your device supported to receive the official Android 9 Pie update.

Google has now officially launched the 9th version of its Android operating system to the public. Check out this great list of Android 9.0 Pie Supported Elephone devices. Talking about Elephone, it is a smartphone manufacturer that has been providing high configuration smartphones within the affordable price range. It will soon host the new Android 9.0 Pie version for Elephone devices before the end of 2018.

Soon after the beta version which was launched on March 8, 2018, it started to buzz around the internet with hundreds of positive reviews and responses coming in reporting about the excellence of the new and improved Android operating system. Google has paid a close attention towards the list of APIs included in the new OS which ranges for notch support, new colors, transition and animations, multi-camera support, and much more. Interestingly, to facilitate the most crucial aspect required nowadays i.e. security and privacy, Android Pie comes with a bunch of APIs that protect the user interest too well. 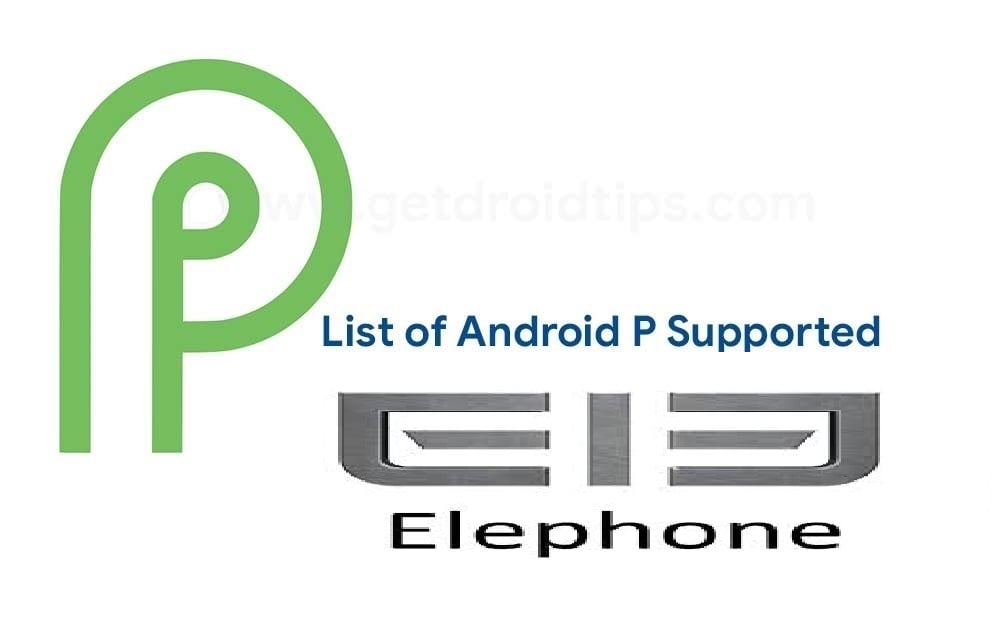 It has a unified fingerprint dialog API which can be used to unlock any app or service on the phone using your fingerprints. Now, you can also lock down the system using its lockdown mode which would refrain anyone trying to forcefully or intentionally try to open the locked phone with your fingerprint. The OS keeps a watch over the usage of mic and camera and doesn’t allow any background app to use these two components which could be used for spying and other purposes. Now, the notification panel keeps a tab on all the notifications and provides options to snooze or alert the user as per instructed.

Android P 9.0 beta was first launched at the Google I/O 2018 Keynote where everything related to its features and usage was discussed but, nowhere does it mentioned the name of the new version. Google followed the same suit for every Android version where it actually keeps the official names under wraps until the official launch, however, Google finally decided to keep the name simple and short with Android Pie. There are plenty of potential names suggested by users, experts, and others all over the world such as Pancake, Pop Tart, Popsicle, Parfait, Pineapple, Pecan Pie, and much more.

Finally, Google started rolling the next major version of Android for the supported Google Pixel device. After the Android 8.0 Oreo, this is the 9th iteration from Google. After the preview, Android 9.0 Pie is available for Pixel and other beta supported devices. With Android Pie, Google has revamped many UI changes which include the notification panel, Settings, Quick Toggles and more. The main highlighted features of Android Pie is notification panel, indoor WiFi positioning, support for iPhone X-style notches, Material Design 2, Dark Mode, Enhanced Auto-fill, Dual Camera API, Neural network API implementation and many more.

Here is the list of top features in Android 9.0 Pie:

New Notification Panel: With Android Pie, Google has completely changed the interface on the notification panel. The quick toggle button now resides inside the dark circle while date, time and carrier name have been removed. With the new notification, Google will also let you select the reply from Google’s machine learning-powered Smart Replies, which scans your messages and will suggest custom replies for you.

iPhone X Like Notch Support: With phone screens getting bigger and bigger and bezels getting slimmer and slimmer, the smartphone manufacturers now have no room for camera, and earpieces> If you like it or not, Google has introduced Notch supports in Android Pie for developers to test how their app will behave on devices with notches.

Multi-camera API: Google finally introducing the Multi-Camera API which enables developers to “create innovative features not possible with just a single camera.” Also, this feature allows every app to request multi-camera instead of the single camera.

Power Saving: In Android Nougat, Google introduced the Doze mode which enables more battery backup while your phone is not in use. With Android Pie, Google has worked hard to bring the more advanced doze mode with App Standby, and Background Limits to further improve battery life.

Enhanced Auto-fill: Auto-Fill one of the best features which will save all your username and password. Google rolled this feature in Android Oreo and now they have improvised it with Android Pie.

The Elephone A2 Pro has a 5.47 inches IPS LCD Display which looks bright and vivid. Under the hood, the device is powered by a MediaTek MT6739 chip along with 2 GB of RAM and 16 GB of Storage. There is a 2,300 mAh capacity battery powering this device up. That being said, the device is currently running on the Android v8.1 Oreo and is soon expected to get the latest version of the Android, Android 9 Pie.

The Elephone A2 has a 5.47 inches IPS LCD Display which is quite decent. Under the hood, the device is powered by a MediaTek MT6580 chi along with 1 GB of RAM and 8 GB of Storage. There is a 2,300 mAh capacity battery powering this device. With that being said, this device is also expected to be updated to the latest version of Android, the Android 9 Pie.

The Elephone Soldier is another great Android Device from Elephone. The device has a 5.5 inches Quad HD Display. Under the hood, the device is powered by a MediaTek MT6797T Helio X25 along with 4 GB of RAM and 64 GB of Storage. There is a 5,000 mAh capacity battery powering this device. With that being said, the device expected to get the latest version of the Android, Android 9 Pie.

The Elephone A4 was released by the Company a while back. This device is powered by a Quad Core 1.5 GHz Processor along with 3 GB of RAM and 16 GB of ROM. That being said, the device is currently running on the Android v8.1 Oreo and is soon expected to get the latest version of the Android, Android 9 Pie.

The Elephone U Pro is another great Android Device which was launched by the Company recently. The device is powered by an Octa-Core, 2.2 GHz Processor along with a massive 6 GB of RAM. That being said, this device is also currently running on the Android v8.1 Oreo and is soon expected to get the latest version of the Android, Android 9 Pie.

Check out the AOSP Android 9.0 Pie update for Elephone U Pro

The Elephone P11 is powered by a Deca Core, 2.5 GHz Processor. This device has 4 GB of RAM. The device is running on the Android, v8.0 Oreo out of the box. That being said, this device is also expected to be updated to the latest version of Android, the Android 9 Pie.

Let’s discuss the potentiality of receiving Android Pie update on various smartphones. First of all, note that Android Pie has its own specific hardware requirements which has been increasing with every new iteration. It means that smartphones complying with the hardware requirements and those with Android Device Drivers to support Android Pie will receive the upgrade. However, it also means that any smartphone released before late 2016 or early 2017 is ineligible of the update and those with lower specifications won’t be able to get the update even after being released in 2018.

Why my smartphone is ineligible to receive an Android upgrade?

This applies to all Android smartphones across the globe. With every iteration, Android versions have specific hardware requirements that must be met. Further, smartphone manufacturer drop supporting updates for smartphones older than 2 years or so since it takes efforts and capital to offer Android device driver for all the smartphones released. In fact, smartphone manufacturers usually release 6 to 7 smartphones in a year which means, they can neglect the older version and produce newer versions with Android Pie OS support.

What should I do if my smartphone is ineligible for Android Pie?

Well, this is a question that soon millions of Android users will ask since the penetration of newer versions of Android OS has seen depletion over the years due to the decreasing number of supported smartphones. Take Android Oreo 8.0 for instance, it was launched last year but yet, many eligible smartphones users are waiting to receive it.

If your smartphone is not covered in the eligible smartphones’ list, there is still an alternative you can use. You can still download & Install custom ROMs like LineageOS 16 (based on Android Pie), Paranoid Android, Resurrection Remix, AOSP Extended, Dirty Unicorns, and others. These custom ROMs allow users to keep their phones updated and use new features and APIs even if their smartphones aren’t eligible to receive the official Android update. These custom ROMs has its pros and cons similar to any other product. You can check out the cool custom ROMs available and check out the directives on GetDroidTips.