Apple is working up really fast shaping up latest operating system iOS 12 to bring it into its stable form. Speaking of which, the iOS 12 public Beta 2 is now rolling live. The software is seeding over-the-air and weighs a massive 560.9 MB. This global iteration of iOS 12 was quite under expectation and now it happens. A few days ago, the iOS 12 developer beta 3 was made available. 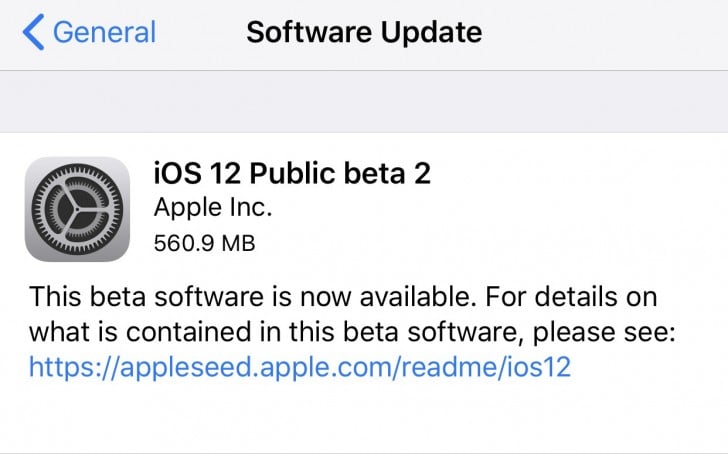 Yesterday only we shared that 2018 line up of iPhones may come in Orange, Blue, Red and Gold color finish. The latest iOS 2 public beta brings the fix for GPS and Carplay bugs. Though Apple never provides concrete changelog as such, user reviews can definitely reveal what the new Apple OS has to provide. The latest beta OS for the public also brings App,e Maps update and activity-theme stickers for Messages.

Other features and improvements which iOS 12 Public Beta 2 packs are the Airpods feature that stops the music playback when the user removes the Airpod from the ear. Latest beta also solves the blackout screen message bug for Spam calls and text. It also fixes the third party social media bugs.

Usually, the public beta is available for users who have signed up for the beta channel. In case, you have not yet received the iOS 12 public beta 2, you can go to your Apple device Settings > General > Software update. Then tap on Software & Install. As the public beta OTA update is a very large file, You may want to connect to a good  Wi-Fi signal to download it. Also, make sure your battery has a full charge before you start the new iOS 12 beta installation.

So, those of you have been waiting to fix issues from the previous iteration of iSO 12, make sure you get to install the latest iOS 12 public Beta 2. You can follow our guide on How To Install iOS 12 Public Beta. Install and enjoy. Also, the stable iOS 12 may drop sooner than you can imagine. Coming months will definitely be busy ones for Apple and its fans.