Asus is a Taiwanese company that manufactures products from consumer electronics to gaming hardware such as gaming motherboard and smartphones across all budget, midrange, and high-end specifications and has a gaming-oriented ROG Phone series. The company hasn’t commented on its Android 10 roadmap except for the Asus 5z so we are left with a tentative timeline here.

Google made it official on September 3rd after launching its most-aspiring operating system Android 10 that was earlier known as Android Q. The new OS introduces users with a host of features as discussed below and brings a new nomenclature on-board which means from now on, Google will be calling its Android OSes with numbers rather than naming it as any dessert from around the world. According to the timeline, the OS is already available across Pixels phones and Essential phones while many companies have already rolled out updates or new phones with Android 10 out-of-the-box. Here’s when Asus Zenfone Max M1 ZB556KL will get its share of updates. 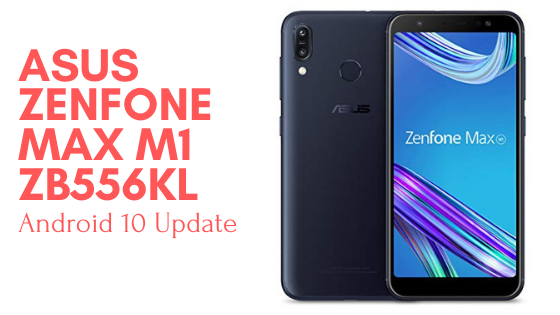 When it comes to features, Android 10 takes an upper seat amidst all other Android OSes. It has privacy controls, updated UI and icons, revamped gesture-based navigation and a bunch of other features. You can read more about it here.

Zenfone Max M1 ZB556KL was put up on sale last year with Android 8.1 Oreo out-of-the-box and has since received Android 9.0 Pie across some regions if not all (so far). Since the device is just a year old, it could be getting its Android 10 update as well, although the timeline is still blurry because the Taiwanese brand hasn’t confirmed the roadmap yet. But we assume that the upgrade should come by Q1 and Q2 of 2020 although it could get delayed or Asus could completely squash the plan to upgrade it at all.

Yet another budget-friendly smartphone from Asus, Zenfone Max M1 (ZB556KL) hosts a. 5.45-inch IPS LCD panel with a resolution of 720*1440 pixels. The device runs on Qualcomm Snapdragon 430 processor which is outdated for its time as the device was released in October last year.

With a stunning battery of 4,000mAh which gives it excellent battery life, the device has a single 13MP rear and an 8MP front selfie camera and has a standard notch-less form factor which is all the phones before notches dived into popularity in 2017.