Asus was established back in 1989 in Taiwan and has since become a multinational company in the consumer electronics and computer hardware sector. Asus is currently the No. 1 motherboard and gaming brand in the world and has enlisted itself in the top-three consumer notebook vendor list. Its ZenFone series has been popularized massively.

Asus Zenfone Max Plus (M2) is one of the many smartphones the Taiwanese-brand launched this year. The device is up in tow to get the latest Android 10 update after Google officially launched it early last month i.e. September 3rd. As per the timeline is concerned, Android 10 which has been renamed after the search engine decided to follow numerical identifiers to name its OSes. Android 10 has since rolled out across a few devices such as OnePlus 7/7 Pro while OnePlus 7T/7T Pro had it pre-installed along with Xiaomi Redmi K20 Pro and others. Asus’ Zenfone 5Z was the first device from the company to get the update while other smartphones are in tow to get the update although the roadmap is not official at the moment. 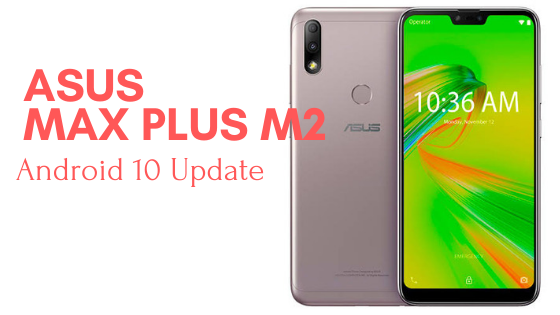 The tenth iteration of Android OS known as Android 10 is the latest addition to the Android family and brings a tonne of features from Live Caption to Smart Replies, better controls over privacy and locations and other features that you can read more about here.

Google has officially launched the OS which leaves it up to Asus to roll it out across its devices. Zenfone Max Plus (M2) was launched with Android 8.1 Oreo out-of-the-box which makes it quite imminent to get the upgrade as well, however, Asus hasn’t officially confirmed it yet. But one can expect it to get Android 10 probably by Q4 2019 or Q1 2020 although take it with a pinch of salt since the timeline could vary depending upon the model, region, carrier, etc. Asus Zenfone 5z has been already upgraded to the latest OS already while the timeline for others are unclear as said.

Asus ZenFone Max Plus which is also called ZenFone M2 is a great phone with the best lower mid-range specifications. Starting with the display, the device has a 6.26-inch IPS notched display with a 1080×2280 pixel resolution. The device comes paired with Snapdragon SiP1 similar to Zenfone Max Shot and has 3GB RAM and 32 GB of storage.

It has a single front and dual rear camera setup along with a massive 4,000 mAh battery and has a micro-USB port for charging. The device also supports Wi-Fi 802.11/b/g/n along with Wi-Fi Direct. The device was originally launched with Android 8.1 Oreo and since the device is still within the period to get further Android updates, it could get the Android 10 upgrade as well, although the timeline is still a bit blurred.