LG X venture is a new smartphone which has IP68 water & dust resistance. Today AT&T has started rolling the February 2018 security patch update for AT&T LG X venture. The update bumps the software version from H70010k to H70010l and brings the February 2018 Security Patch for AT&T LG X venture. This update is still based on Android 7.0 Nougat. Along with this update, AT&T also included a fix for Meltdown and Spectre mitigation patches.

Talking about the specs, LG X venture features a 5.2-inch IPS LCD display with a screen resolution of 1080 x 1920 pixels protected by Corning Gorilla Glass 4. It is powered by 1.4GHz Octa-core Qualcomm Snapdragon 435 coupled with 2GB of RAM. The phone packs 32GB internal memory which can also be expanded up to 256GB via microSD card. The camera on the LG X venture comes with 16 MP rear camera and 5MP front shooting camera. The smartphone came out of the box with Android 7.0 Nougat with battery backup of 4100 mAh.

The update is currently rolling via OTA (Over The Air) to every user in AT&T carrier. The rollout is in a staged manner. It may take a couple of days or weeks to reach every AT&T LG X venture users. To receive the OTA update notification, you must be running stock firmware. 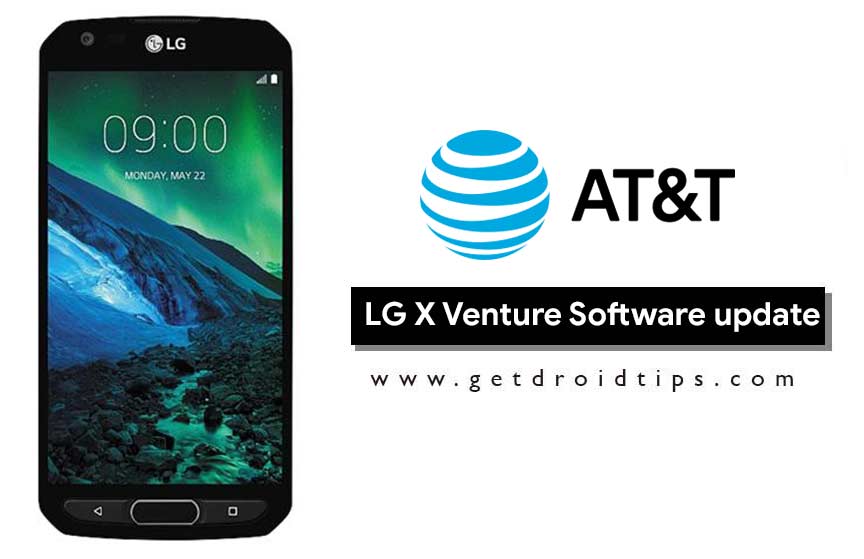 The update brings nothing major except the security patch, bug fixes, and other improvements. Now upgrade to a more secure version of software on AT&T LG X venture to free from Malware and another virus.

If you have the OTA update on your phone, then we do recommend you to install the February 2018 security patch update to keep your phone safe from vulnerabilities. Well if you have no update, then please check the OTA update manually by following the guide.

How to check OTA update on AT&T LG X venture:

If you have the update notification on your AT&T LG X venture phone, then hit the DOWNLOAD button to start upgrading your phone to latest software version H70010l.

Once if you have all this, you can proceed with upgrading AT&T LG X venture to H70010l.

In case if you have the download link to the firmware H70010l, then you can simply follow our guide to installing the software KDZ file manually.

[su_note note_color=”#fdf8db” text_color=”#000000″]Make sure you have followed the steps properly. Don’t Skip and Read! – We are at GetDroidTips are not responsible for any damage that you make to your Phone.[/su_note]

Follow This Guide to Install LG KDZ Firmware on any LG Devices.