Call of Duty: Modern Warfare 2 has a lot of guns that players can use as they play through the missions of the main story. Unique gameplay mechanics and a large weapon stash are just a couple of things that make up the game, and the latter is what many players are interested in. The Fennec 45 is one of the quick-firing SMGs you will get in the game, and you should be familiar with the best loadout you can get.

Like most shooter games, you can complete missions and unlock more equipment in Call of Duty: Modern Warfare 2. These weapons can be customized and improved further with the help of attachments and perks, making them a force to be reckoned with. For the Fennec 45, you need to set up its class, attachments and perks, so let’s find out which ones are the best in the game. 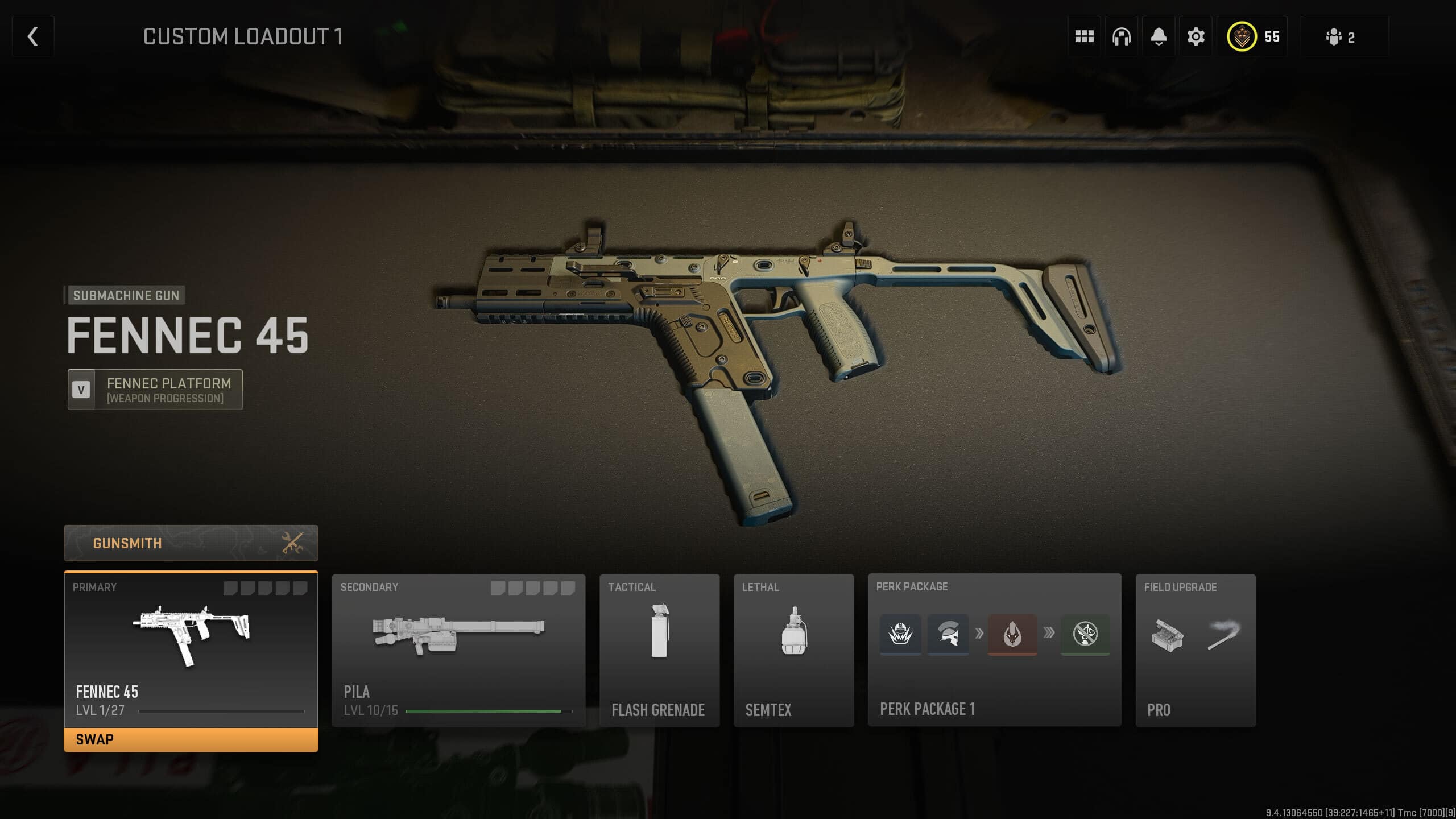 If you’re used to playing as Ghost in Modern Warfare 2, you’ll be familiar with Fennec 45, or the Vector as it’s commonly known. The first thing you should know about this gun is its strengths and weaknesses. This way, you know which attachments to pick.

The Fennec 45 has a quick firing rate, and its TTK (Time To Kill) is one of the best in the game. This is mostly because of its high headshot damage. However, if you don’t secure the headshot, the damage profile gets severely worse. So, you need to be great with your aim if you want to use this gun effectively. The magazine capacity isn’t great either, which means quick fire rates finishes it off quickly. You’ll be spending a lot of time reloading this gun if you’re missing shots.

When picking attachments for this weapon, you will need to ensure that the magazine capacity and damage are improved with an increase. In addition to this, make sure you get a good optic to snipe some headshots. The other attachments can focus on the other shortcomings that will appear on applying these.

Considering the above, we need to focus on getting that damage and stability up. here are the best attachments for the Fennec 45 in Modern Warfare 2:

To improve velocity and damage range, this is your best bet. Another great option is the ZLR 16.6 Ignition Barrel. The barrel will come at the cost of movement flexibility, but you can recover that with the laser.

Once you have your Fennec at Level 22, you will be able to get this stock to improve handling, crouch speed and ADS speed. Getting up to this level can be a grind, but it will be worth it. Until you have this in hand, you can use the FTAC Stock Cap, which increases speed and improves recoil control.

The laser will improve sight speed, sprint-to-fire speed, and your aiming stability, which is essential if you want to get those headshots.

As mentioned before, the magazine capacity of the base weapon is pretty bad considering its rate of fire, so you’ll need a better one. With the help of the Fennec Mag 45, you can have those extra bullets and get multiple kills for both close and long-range shootouts.

As the Fennex 45 tends to shoot in short bursts, sometimes the recoil can be too much to control. This muzzle helps curb the weapon’s recoil, while reducing your sight. However, the optic can pick it back up.

The EOTech is a good option as it will improve your accuracy, but you can go with any optic of your choice. Another contender is the Cronen Mini Red Dot.

There are no downsides to this attachment, which is a plus. You get higher aiming stability, which the Fennec 45 desperately needs.

The secondary weapon you should pick for the Fennec 45 in the class loadout is the P890. This is great as a semi-auto pistol, and you can be sneaky about it as both these guns hide death skulls.

For throwables, you can use Flash Grenades and Semtex. These are good options as they detonate early and will give you a boost during your shootout. You can also use Medical Syringes as a health recovery option.

As for the field upgrade, you should pick Dead Silence. With two subsonic weapons, you will have the added advantage of stealth to your SMG build.

There are some great perks in Modern Warfare 2, and you can pick them to be part of your weapon build. These are essentially modifiers for your multiplayer matches, and can passively affect gameplay. You can add two basic perks to a gun: a Bonus Perk and an Ultimate Perk. Here are the ones that work best with the Fennec 45.

As you have limited ammo with the Fennec, it’s a good idea to have this perk as you will never run out. The bodies you hit will drop their guns and ammo, so you will have a free supply of ammunition.

If you want to increase your movement and cover a longer distance on bigger maps, you can choose Double Time. For smaller maps, choose the next one.

This is a Tier 3 perk which can reduce the effectiveness of certain attacks against your character such as flash, stun, and gas effects. You can get back into the action quicker and survive even in difficult situations.

This is the ultimate perk that you should pick for Fennec 45. It will improve your stealth build as it hides your steps from tracking devices. A secondary option is Quick Fix if you need a health boost.

You can pick your own bonus perks, but here are some that are pretty good: Resupply, Hardline, and Cold-blooded. You can either focus on building up your magazine capacity on working on your stealth build.

So, there you have it – the best Fennec 45 loadout in Modern Warfare 2. This is one of the stealthiest builds ever in the game, so no wonder Ghost likes this gun. While it might seem weak at first with its damage profile, the accuracy and fire rate are great for SMGs. With the correct attachments, you can make the most out of it and take it to its best form.