Call of Duty Warzone has plenty of weapons to choose from, but if you like to use the PKM light machine as your primary weapon, then here are some of the best attachments for the gun. The PKM is a light machine gun that offers a good firing rate, accuracy, and range. It uses a 7.62mm ammunition that will cause serious damage to enemies. However, this being a heavy weapon will affect mobility. Read on to find out the best loadout for PKM in Call of Duty Warzone. 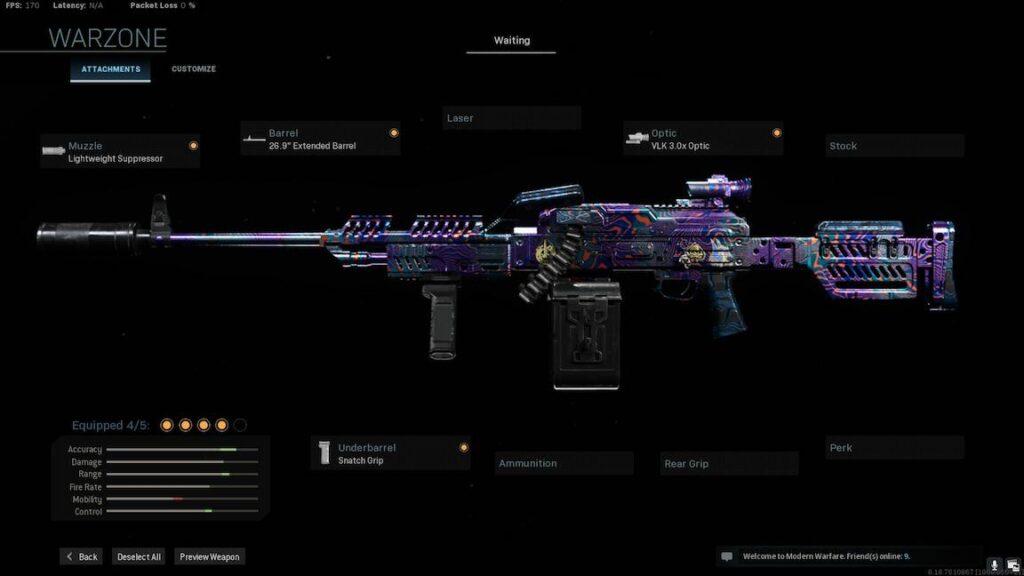 This build will add several improvements to the PKM, such as faster bullet velocity, better sound suppression, and recoil control. However, the barrel attachment will affect the movement speed by -1 percent, and Aim Down Sight by 0.2 frames. This isn’t a lot, which is why this a great build.

The lightweight suppressor improves sound suppression and makes the PKM a great gun to be used in stealth. It also improves the agility of the gun but decreases the range by 25 percent. The suppressor is made from lightweight aluminum.

The 26.9″ long barrel for the PKM is a great attachment as it improves bullet velocity and increases range by 20 percent. Due to the added weight of the barrel, the stability is also improved, and this enhances recoil control. Aim Down Sight is effected by +1 frames, whereas movement speed is reduced by 1 percent. The main function of this barrel is to improve recoil control.

The Snatch Grip is a canted foregrip that will improve the vertical recoil for the PKM. The Aim Down Sight is improved by -2 frames, and you will also get better recoil control due to the better stance of the weapon. It is easier to raise or lower the weapon, but movement speed is effected by -1 percent.

The Tac Laser isn’t really a necessity, but you can add it to improve the Aim Down Sight. This uses a high power 5mW green laser that will improve accuracy and enhance aim stabilization. However, your location could be exposed due to the laser being visible to the enemy.

Going the No Stock way is a great way to build the PKM as it improves Sprintout by 20 percent, and if agility is what you want, then you should choose this. It also improves the movement speed by 4 percent; however, the recoil control and aim stabilization are affected. The Aim Down Sight is also faster by -2.5 frames.

The PKM has a bad reload speed; hence it is better to use a 150 Round Belt on the gun. You get 150 rounds of 7.62 NATO ammo, but it does add a bit of weight, which reduces movement speed by 3 percent.

This loadout is similar to the first one, but it uses a slightly heavier barrel for improved range and an FSS CQC Stock for faster Aim Down Sight. This build will improve bullet velocity and sound suppression similar to option 1, as we’re using the same attachments other than the barrel, Stock, and more rounds of ammunition. Let’s take a look.

The 25.9″ barrel for the PKM will add more weight compared to the 26.9″ extended barrel, and it is built for close combat fights. It improves Aim Down Sight by +1 frames and adds 25 percent more range with faster bullet velocity.

The FSS Close Quarters stock is once again meant for close combat. It will get you on the target much faster as the Aim Down Sight is reduced by the +1 frame.

You can use a 200 Round Belt for the PKM as the reload time for the gun is very bad. Instead of wasting time reloading the gun, aren’t more bullets better. The Aim Down Sight is improved by +2 frames; however, the added weight decreases movement speed by 6 percent.

There you go—the best loadout for PKM in Call of Duty Warzone. We would personally go for loadout option one as it has a better list of attachments, and range isn’t really a big deal with this gun. Let us know which is your preferred choice using the comments section.