Fortunately, if you are lurking out to learn ways to understand ward, this article shares a complete guide to getting better at warding in League of Legends. We have discussed ways that will help everyone no matter whether it’s a lo-Elo or High-Elo, a pro player, or just a newbie.

League of Legends requires a great approach to consistently learn and improve your gaming skills with time. One way to simultaneous keep growing in the game is by getting your hands over all types of units. Even though warding and vision were earlier disregarded by players, they are now considered to be of equal importance in League.

Warding in fact is of huge importance in the game. If you can get a hold of it, warding and vision can alone save a game in the worst situation for you. Since it requires exceptional determination to learn and understand warding. mastering it can be quite tough. However, they do offer fruitful results once you grasp to use them in your favor. 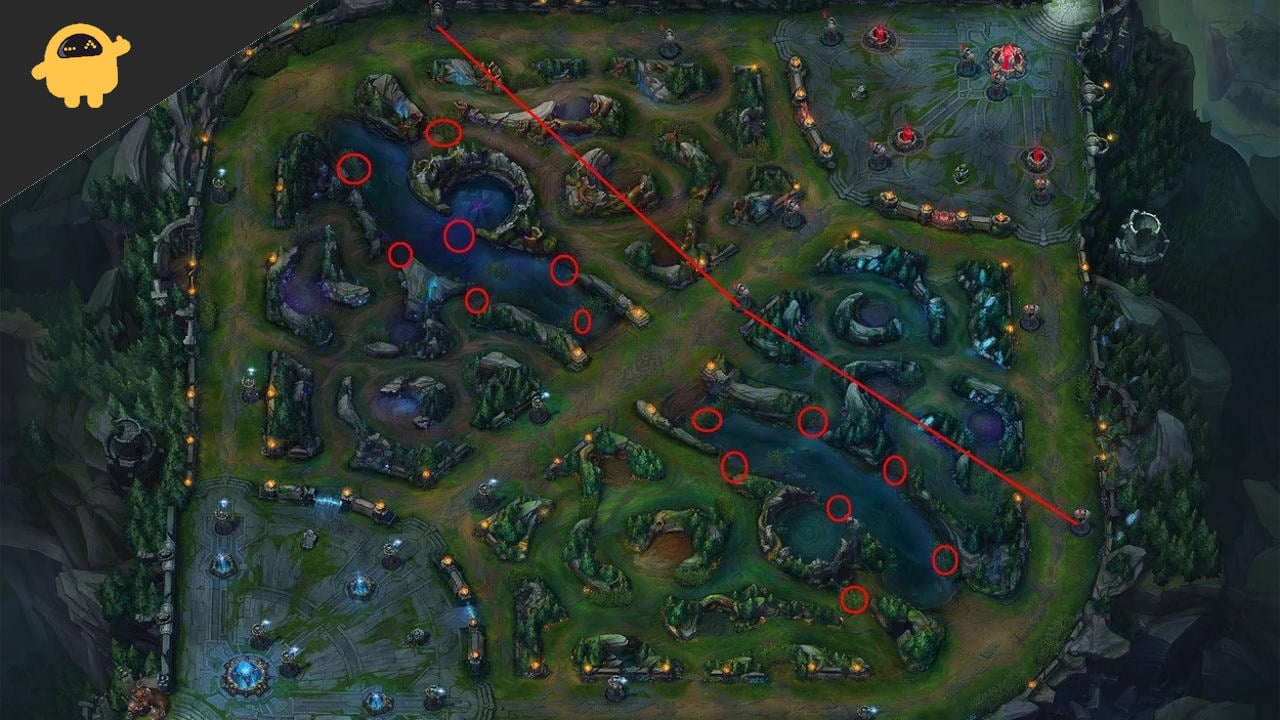 What is Warding in League of Legends?

If we were to talk about the most interesting mechanism in League of Legends, it would probably be the Fog of War. A thick layer of darkness prevents you from seeing your enemy teams on the other side of the Summoner’s Rift. Although the fog of war could be trespassed using abilities, turrets, or champions, the idle way to reveal it is by using wards.

A ward is basically a unit that could remove the fog of war and peek into the enemy’s territory in the most convenient way. Meanwhile, vision refers to warding and also destroying the enemy wards to stop them from peeking into your territory. This ultimate combo can help you overcome the fog of war quite efficiently.

Before moving on with the topic of the day, let us first try to understand why warding is seen as having higher importance in League of Legends.

Well, just like it would sound in a real war, knowing your enemy’s activities always gives you an edge in the war. Similarly, in League of Legends, there are many things to take care of at once. Firstly, the enemy rotations and positions are necessary information to win a war. Moreover, unexpected ganks and brush camps can be serious threats to your own army. Hence, knowing anything about them grants you the freedom to prepare yourself to encounter any such situation.

Wards are the ones who can efficiently infiltrate the enemy’s territory and bring you valuable information like these. This gives you an idea about their strategies and allows you to prepare yourself to gain an advantage from them. Deep wards placed at the right positions can bring potential information that directly impacts how you encounter your enemies to achieve victory.

How to Get Better at Warding in League of Legends?

Warding requires a lot of dedication, to begin with. The modern-day League of Legends has replaced the Pink Wards and Green Wards with Stealth Wards, Control Wards, Zombie Wards, and Farsight Alteration.

Stealth wards are early wards that are basically beginner items in League of Legends. They provide a maximum of 120 seconds of cooldown. The fact that stealth wards are invisible, makes them of further importance in the game. Generally, Stealth wards can only be detected through Scryer’s Bloom or Oracle Lens. So, if placed carefully, they can be of great use.

Unlike stealth wards, the control wards are very much visible and are far easier to be destroyed. They are 75 gold-worth wards that are basically bought in the shops. Apart from that, the Zombie Ward again is capable to reveal the enemy’s territory for a maximum of 120 seconds. They are basically rune-dependent wards that only have one HP.

And last but not least, the Farsight Alteration is pretty much similar to the Zombie wards. They are again one HP wards, but just like the name suggests, they can reveal the enemy’s territory from a great distance. This further makes penetration easy and you can get them only in the item shop that too after reaching level nine. With that being said, we have covered most of the general information about wards in League of Legends. Now, let’s get started with how exactly can you get better at warding in League of Legends. 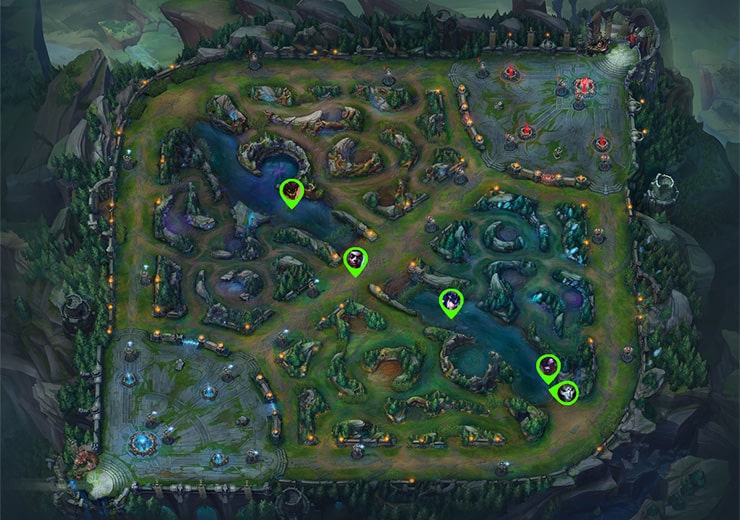 In the early game, you will come through a whole lot of techniques and strategies for warding. And since it entails strategy, there is no guarantee that each of them would reflect a successful result. Even though, following certain rules and practices definitely increase your win rate in the long run.

To start with, League of Legends has certain designated spots for different roles. If you place your wards in these spots as per the roles to spot the enemy, it prevents you from walking into the unknown. And as we all know how dangerous it might be to walk into the unknown, avoiding them is probably the best practice you can adopt to increase your win rate. This will not only help you build a strong foundation in the early game but also prevent you from getting your flash blown away.

Apart from that, in most parts of the early game, focus more on saving yourself against the gank attacks. They are one of the major reasons that might collapse your game in an instant. Therefore, always consider warding the camps, river bushes, and the enemy jungler’s camp.

Keeping a check on them will help you know about your enemy’s move in advance and grant you time to either deal with it or escape. And thanks to the deep river wards, they can keep up with checks in the most convenient way. Also, make sure to always have a vision of the dragons and rift heralds as well. If started from a hostile position can increase your chances of counter-attacking the enemy.

Mid and Late Game Warding in League of Legends 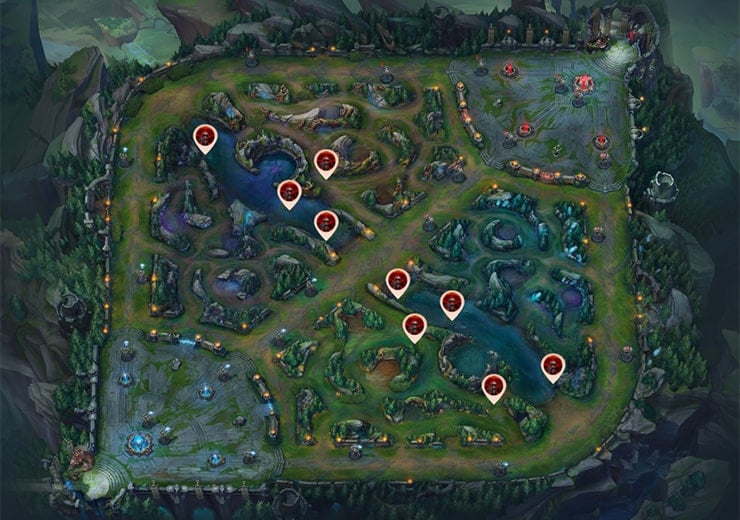 Most parts of the mid and late-game warding mainly rely on your playing approach. It keeps changing depending on whether you are adopting more of an offensive or defensive playing style. If you are leading in your game, you would most probably lookout to go all offensive. In that case, always consider the enemy jungles as your best warding spots. Here you will get many chances to get your enemies off guard as they come looking for their targets, farming, or rotating. Thus, it becomes even easier for you to deal with them while in charge.

On the other hand, if you are trying to build up your game, adapting a defensive playstyle seems more reasonable. In that case, the best warding spot would be your own jungle. Here, you will get the maximum chances to catch the outlying champions and punish them right away. However, if the situation is still not very much critical, prefer warding just outside the towers range. This will give you a better chance of destroying the wards placed over the wall. But again remember to place them in a spot that is out of the auto attack range of the enemies.

In case of a defensive playstyle, it is always recommended to evenly spread your wards in an accurate position to gather as much information about your enemies as possible. For instance, place a mixture of wards in your own jungle to get a wider view of your enemy’s approach. Also, place a couple of control wards in your base to make it more precise.

With the growing popularity of League of Legends, it has now come to make appropriate strategies and use each of the resources precisely to increase your win rate. As such, warding and vision act as the core when it comes to attacking or playing defensive against your enemies.

The information you can mine using wards is definitely priceless. However, it requires a lot of dedication and analytical thinking to make things go as planned. Hopefully, if you follow the practices we have mentioned in this article, you will eventually get better at warding and can also see fruitful results in the long run.