Destiny 2: Forsaken has several quests for the players to try and complete. Some of them are hard, while some are just too confusing for some. Here, we are taking a look at one of these quests, the Broken Awoken Talisman quest. We have compiled a complete guide on how to complete this quest, and also a brief on how to enter the Dreaming City, which is the end prize of completing this quest in the first place.

It is not a single thing to do here to complete this quest. A bunch of completed events will lead to the successful completion of this quest. So to get you a clear idea of everything that needs to be done, just follow the instructions mentioned below. 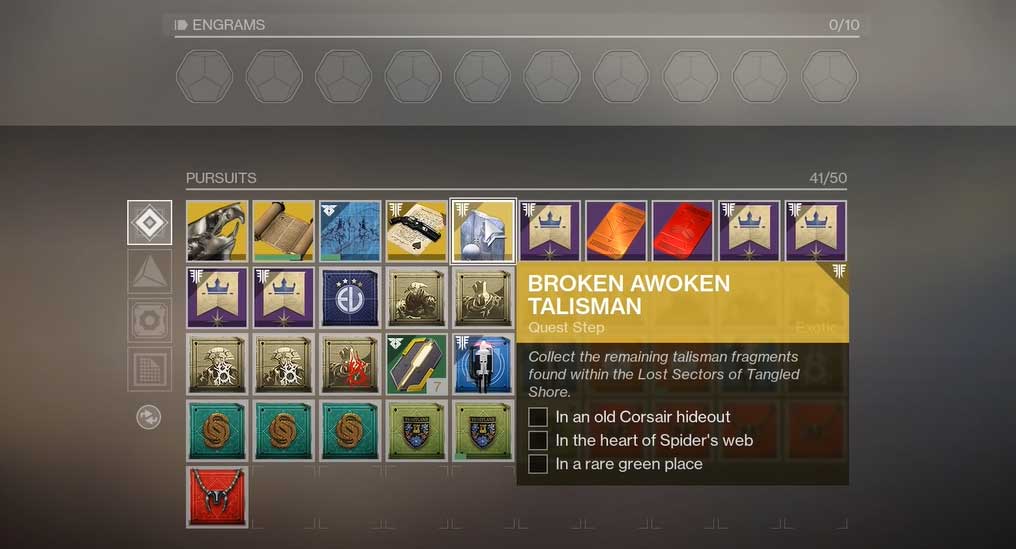 First and foremost, the players need to complete the Forsaken campaign, which means killing all the eight Scorn Barons. After the first level of Prison of elders, players will go down to the Tangled Shore and kill everyone involved in the death of Cayde-6. After the completion of this small mission, a final campaign level will show up where the players need to finish of Uldren Sov, which is a boss of this level. After successfully defeating him, players will talk to Petra Venj, who will give them the Broken Awoken Talisman quest.

The Spider will tell the players that they need three specific fragments to repair the Talisman. All these three fragments are lost in three different parts of Tangled Shore. The players need to collect these lost fragments and bring them over to Spider so that he can fix it.

The first fragment of the Talisman can be found in the Shipyard AWO-43 Lost Sector in the Jetsam of Saturn. Head to the center of the zone and look for a pile of rocks with the Lost Sector symbol painted on top. Once you find it, you will also find a cave near it. Get into the cave and fight of the Fallen hiding inside. Keep on going into the cave until you meet the Servitor Boss and kill him too. After that, you will receive a chest, inside which you will find the first fragment of the Talisman.

The next fragment can be found in the Thieves’ landing. Head to the Spider, and here instead of jumping the barricades and getting inside, take the nearby door you will on your right side. This door will lead to the Empty Tank Lost Sector where you fight against a bunch of Fallen and Hive. Finish them off and also the Cabal enemies that wait ahead. Then you will finally meet the Fallen Vandel boss. Defeat him, and it will grant you access to the chest in the room on your right side. Inside that chest, you will find the second fragment of the Talisman.

The last fragment can be found in Trapper’s Cave Lost Sector in Four-Horn Gulch. Just like with the other two fragments, here too, you will be welcomed by some sleeping Cabal War Beasts. Defeat them all and then kill the Cabal Centurion boss. The boss will give you a specific code for the quest he has, and you will have to use that code to open the chest and have the last fragment of the Talisman.

This step requires the players to complete an Ether Ritual public event in the Four-Horn Gulch region of the Tangled Shore. During this event, three Chieftains will spawn and cause hindrance to the players. So you need to use any weapon necessary to kill these Chieftains and also the wave of enemies that will attack them in the meantime.

Go to the Spider again, and it will then give you a Balanced Awoken Talisman. This will provide you with permission to enter the Dreaming City, but the quest is not done yet. The Spider will then tell you to meet Petra Venj at the Watchtower in dreaming city, and after doing the players will begin the A hum of Starlight mission.

A hum of Starlight:

Here, the players will go through the last level of the Forsaken campaign again, but with a less powerful group of Taken to take care of. Then you will have to kill a Scorn Cheiftan and present the offering to the Queen’s Oracle. This will give the players a random item of Dreaming City using which they can unlock a patrol space area.

This is the final task of the quest where the players need to enter the Shattered Throne Dungeon in the Dreaming City. Here you will encounter a bunch of strong enemies, and in the end, someone named Vorgeth too. Once Vorgeth is killed, present the Talisman you have on your inventory to the Awoken statue. Following this, a new exotic quest will be unlocked, and the players will get access to the Dreaming City.

So there you have it, a complete guide on the quest of repairing the Broken Awoken Talisman in Destiny 2. If you have any queries about this guide, then comment down below. Also, be sure to check out our other articles on iPhone Tips and Tricks, PC tips and tricks, Android Tips and Trick, and much more for more useful information.