Lenovo-owned Motorola Moto Z4 has recently launched in the US. The device comes with a good price tag and specifications as well. After so many leaks and rumors, it’s now official. The $499.99 smartphone supports the Moto Mod connectivity as well which includes the 5G as well. The unlocked Moto Z4 version costs at $499 while the Verizon users can get it for $240 on a contract basis. The device also supports 5G connectivity via the 5G Moto Mod which costs additionally $199. You will get 360-degree Moto Camera Mod out-of-the-box. Here in this guide, we will provide you the steps to capture a screenshot on Moto Z4.

All the mentioned steps are quite easy and useful for most of the situations. You will simply do the job without any hassle or extra effort. But before going to the steps, check out the device specifications as well.

The device comes with a 6.4-inch OLED FullVision Full-HD+ waterdrop notch display with a resolution of 1080×2340 pixels. It’s powered by octa-core Qualcomm Snapdragon 675 SoC coupled with Adreno 608 GPU. It offers the 4GB/6GB of RAM and 64GB/128GB of internal storage which supports up to 256GB of expandable memory via a MicroSD card. The device has Bluetooth 5.0, USB Type-C, a 3.5mm audio jack, NFC, Moto 360-degree Camera Mod, 5G Moto Mod, etc connectivity options. 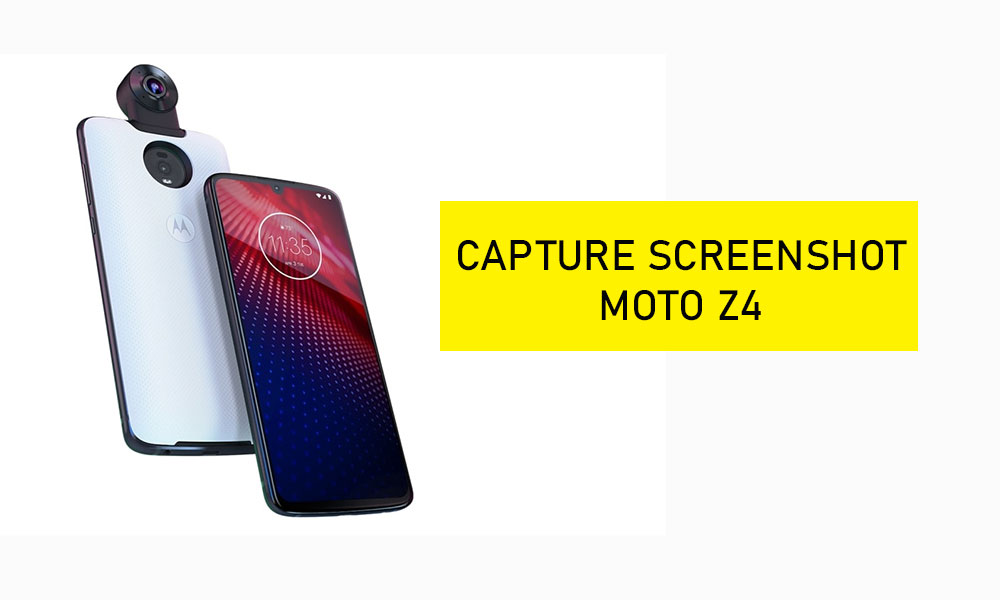 Must Read: Moto Z4: Everything you need to know

In terms of the camera department, the device packs a single 48MP (f/1.7) primary rear camera with an LED flash. While the front is a 25MP selfie camera with f/2.4 aperture lens. The selfie camera features Quad Pixel mode for low-light photography. The Moto Z4 runs on Android 9.0 Pie out-of-the-box and offers a 3,600 mAh non-removable battery with 15W Motorola Turbo Charging support.

Steps to capture a screenshot on Moto Z4

Here are the 04 easy steps mentioned below to take a screenshot on the Moto Z4:

Step 01: Use Hardware Buttons (Power+Volume Down)

The hardware buttons are the best and full-proof combination to capture a screenshot on any device. Let’s take a look:

Gestures are very useful and easy as well on a smartphone to perform a task. You can set the swipe gesture on your Moto Z4 to capture a screenshot.

We hope this guide will be useful to you to capture a screenshot on your Moto Z4 device. Feel free to ask your queries or share your thoughts in the comments below.