Despite certain flaws, this assault rifle can be extremely accessible and helpful. Now we will present our choices for the best attachments for the most efficient loadout for the FR 5.56 in Call of Duty: Modern Warfare. 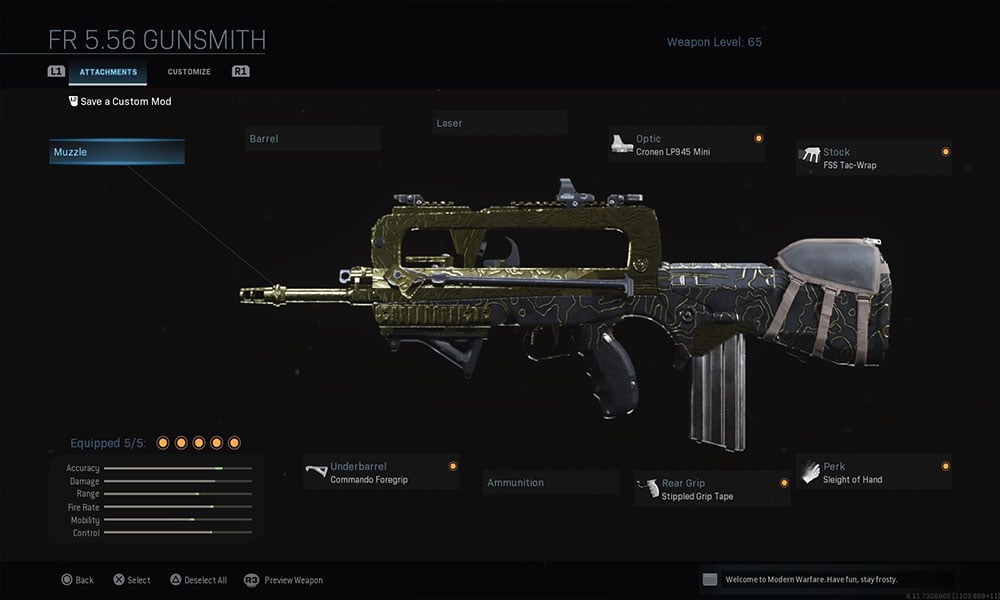 Given below are the stats of the FR 5.56 in Call of Duty: Modern Warfare.

A lot of players are discouraged by the fact that the FR 5.56 is a three-round burst rifle. But considering the fact that Modern Warfare is a camp-heavy game with heavy emphasis laid on angles, that is actually a helpful resource for you to move up the rank ladder and enhance your SR. Although it can take time to master, it can make you almost invincible in close quarters combat when you do!

However, it is important to bear in mind that FR 5.56 requires you to aim very carefully and accurately. This is because you will not have enough time to re-focus on your target in case all three of your shots miss their mark. You can hope to compensate if a couple of your shots strike the target, and then your second burst can take down your opponent. For that, however, you need to be extremely fast.

Considering this requirement for speed, you need a weapon with respectably large damage output and a high rate of firing. Apart from this, it needs to be accurate enough to successfully hit the target’s torso at least half the time following two bursts, and guaranteed after three bursts. The good news is that FR 5.56 has been designed to be deployed in almost any place and situation. You need to make sure it has high mobility, low recoil, and a proper scope that is convenient and does not conceal blind spots.

Give below is our choice for the best setup, which can transform your FR 5.56 into a most lethal and unstoppable weapon that will be able to take out most enemies with a single shot.

The 24.4″ sniper barrel, despite reducing your mobility somewhat, also boosts damage control, recoil, and bullet velocity. This will greatly help you during long-distance shootouts. The monocle reflex sight does reduce your ADS speed. However, it also makes targeting easier with its convenient and sharp viewpoint. The FR ultralight hollow stock enables you to move faster during ADS. The stippled grip tape will boost your speed from sprint to ADS. The commando foregrip underbarrel serves to reduce recoil. It also makes up for some of the aiming stability compromised due to the other attachments.

Also Read: How To Install Suspended or Missing Data Pack on Modern Warfare

That is it for now. We hope this loadout of our choice will help you get the most out of this fantastic assault rifle in Call of Duty: Modern Warfare. Now, check out our Windows Guides, Gaming Guides, Social Media Guides, iPhone, and Android Guides to read more. However, if there are any queries or feedback, comment down with your name & email ID. We will try our best to reply soon. Also, subscribe to our YouTube Channel to watch awesome videos on gaming and smartphone tips and tricks. Thank you.