If the reports are to be believed, the internet and Smartphone users will become almost double in the next 5 years. Well, the 4G revolution is not the only factor responsible for this but there are several other factors too which have sincerely contributed. One such factor is the sincere efforts of the manufacturers in making their devices more useful and powerful. In fact, it is the reason why modern day gadgets are popular than ever before. Of course, no one imaged that a phone would be able to perform all other tasks than just making /receiving phone calls. The manufacturers have performed various experiments and have come out with the gadgets that can be trusted for the long run. HTC is one such manufacturer. There was a time HTC was the third top-notch manufacturer after Apple and Samsung. They have recently come out with one of the amazing gadgets are i.e. HTC Desire 12. This post simply introduces you with the common HTC Desire 12 problems and fixes.

The HTC Desire is one of those gadgets which run on Android’s latest version and i.e. Oreo 8.0. It has been provided with features that are simply the best. Before you read any information about the common HTC Desire 12 problems and fixes in this post, it’s good to be clear of the fact that this device doesn’t have major hardware problems associated with it. The fact is Android is an open source technology. The Smartphone manufacturers have to compile it and have to modify it in order to make it compatible and suitable for a particular model. Also, different manufacturers prefer processor and RAM that cannot be from the same manufacturer. Therefore having some minor issues in the Android-based gadgets is a common thing. You might have no idea even some of the high-end smartphones which are based on Android face these common issues. 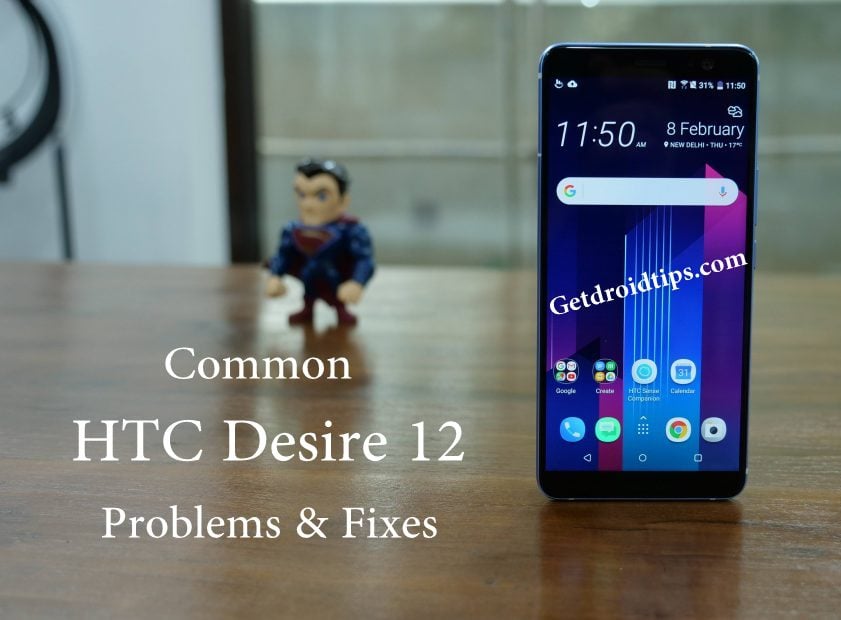 The good thing is it is possible to eliminate them simply if you know the right instructions and methods to be followed for the same. This post put some spotlight on the common HTC Desire 12 problems and fixes and simply let you keep up the pace in this matter. Before I unveil the same, let us first have a quick review on the basic specifications of this device.

The HTC has provided it with an IPS LCD touchscreen with a screen resolution of 720 x 1440 and users can always make sure of a dynamic experience on the 5.5-inch screen. The powerful 1.3GHz quad-core processor simply lets you keep up the pace and the best part is you can always make sure of performance while using this phone. It has a 32GB default memory which be extended by upto 400GB using the hybrid slot for SIM 2 and memory card.

The 3GB RAM is another good feature about this gadget and you might have no idea but this is one of those devices y the HTC which has been designed by paying a lot of attention on the performance factor. It packs a 13MP primary camera and a 5MP secondary one which let you capture snaps without worrying about anything. In addition to this, it has a 2730mAh non-removable battery that can be trusted for a full day backup. Let us now proceed with the common HTC Desire 12 problems and fixes.

When it comes to dealing with the problems associated with any smartphone, it is always good for you to keep this thing in mind that a little knowledge is a dangerous thing. Therefore, you must follow the methods and instructions in a very similar manner as they are mentioned in this post. We at Getdroidtips.com cannot be held responsible for any additional problem you face while following this guide in a careless manner.

Connecting the smartphone with other devices and gadgets is a task that needs to be performed often and in fact again and again. This is because everyone has to transfer data from the phone or have to receive it. In addition to this, the device needs to be connected with the router for the stable Wi-Fi connection. This clearly indicates that the connectivity is a task that depends on the certain factors. Even a minor problem in any of the basic feature can result in this problem. In case the connectivity is the problem you are facing with your HTC Desire 12, here is what you can do to deal with the same.

A lot of factors are there which can be held responsible for the earpiece sounds robotic. You can deal with this problem by considering the following factors

The HTC has always taken care of their fans by providing the excellent camera quality in most of their phones. Although the desire 12 packs decent cameras which are good enough to be trusted, there are sometimes a few problems declare their presence and can be the reason why cameras fails to maintain the same quality as you get the very first day. Well, if this is a problem with your device, I recommend you to proceed with the below camera related guide on common HTC Desire 12 problems and fixes.

Every task you perform on the phone consumes juice from the battery. The nature of each task is not similar and equal and therefore it is not a strange fact if you see more battery is consumed while performing some special tasks such as downloading the data and so on. There are several other factors that could be the reason of this problem. Here is what you can do to get it fixed

It is not always necessary that the SIM card fails to show the network just because of the factors that are associated with the card itself. Actually, its functionality depends largely on several other factors and thus you need to examine the same to make sure everything is working fine. Here is what you can do to keep up the pace simply

Well, there are too many hardware devices fabricated on the PCB board which you find inside the smartphone. It is true that each one of the same consumes power and therefore releases heat. Although the same is driven outside the phone, sometimes a specific device has more load on it than others and therefore it releases more heat. Thus, you should make sure that you are not performing multiple tasks at the same time which put burden on a specific component only such as RAM. The other methods to help you deal with this problem are mentioned below

Everyone wants to have the same level of performance with the device that it offered on the day one. Well, the performance often goes down and the fact is there are many factors which directly influence the same. You can deal with the same by paying attention to the below methods

If your phone is facing this problem, the actual cause of the same could be due to hardware or a software fault. Therefore you must pay attention to both of them at the same time. Here is what you can do to avoid this problem

These days Smartphone users have to deal with more data and the best thing is manufacturers allow them to use a memory card which is always beyond the default memory capacity of the phone. However, there are certain problems which declare their presence. Check out the information on the same below and the best possible solutions against the same

This is the problem which you can fix by paying attention to some certain facts that are not always directly linked or associated with this problem. Pay attention to the following methods and instructions

This is all about the common HTC Desire 12 problems and fixes. If you think I have skipped any other issue which you are facing with your phone, let me know the same through the below comment section. For more posts on common problems and fixes for all other latest devices, keep visiting our website.