Although it’s the century of youngsters, one of the common saying by the old school going people couldn’t be denied and i.e. “Old is always Gold”. Well, the fact is Nokia doesn’t need any introduction. In fact, it’s the manufacturer due to which others started paying attention to their gadgets and are now very successful. The good news is Nokia has already made a comeback and is again becoming a challenge to tackle by other manufacturers. It’s not just people were already familiar with this brand which made them popular, but the fact is Nokia has always come up with timely updates on all their devices. This post is to introduce you to the common Nokia 3 problems and fixes. You can grab the useful information regarding the same by continuing your reading.

The Nokia 3 is celebrating its first anniversary this month. Because a lot of people purchased this device just after its release, they will soon have to say good bye to the official warranty period. In fact, a few users have started experiencing the common issues with the device. Although most of them are associated with the OS, it’s necessary to pay attention to them as they can create a lot of other issues in the long run. If you are using this device and are facing the same problem, the following paragraphs reflects the useful information on the common Nokia 3 problems and fixes to enable you to maintain the functionality of your device. 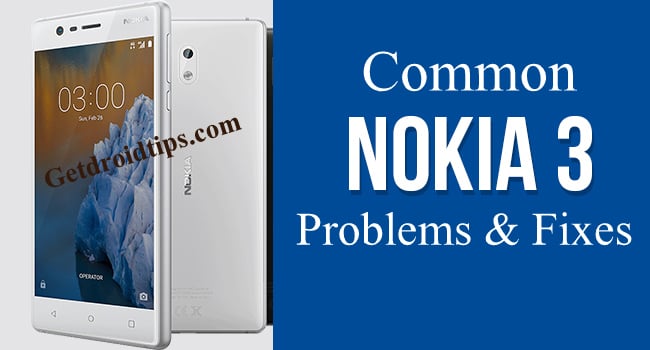 The Nokia 3, as already mentioned, was first made available in February 2017. It comes with the 5-inch display through which you can make sure of 720 x 1280 pixels resolution. For performance, Nokia has equipped it with a 2GB of RAM and 1.3GHz quad-core processor which is best for those who have basic needs to fulfill. The device comes with 16 GB ROM and its possible to extend it by upto 28GB through a microSD card. This is the basic information on the hardware configuration that you should know before knowing about the common Nokia 3 problems and fixes.

One of the best things is it packs an 8MP primary camera and a twin on the other side i.e. secondary one. Of course, you can capture quality snaps and without worrying about anything. You might have no idea but Nokia 3 is good enough when it comes to battery back-up. This is because of 2630mAh battery it has been provided with for a decent use. Also, Nokia 3 runs on Android 7.0 technology which simply boosts performance. You can now proceed further with the information on common Nokia 3 problems and fixes. Check it out below.

Nokia 3 has been designed to be a reliable performer and actually it is. However, the issues that it has been experiencing are due to OS bugs. Keep it in mind that any issue could have multiple factors responsible for this. Therefore follow all the information about the common Nokia 3 problems and fixes as mentioned in this post. Probably you will come out with the desired outcome. However, Getdroidtips.com cannot be held responsible for anything that goes wrong with the device while following this guide due to your own mistake.

Nokia 3 is a decent performer and is having the configuration to perform basic tasks. Therefore if you involve it more in the bulky and complex tasks, it will dissipate more heat. It has also been reported by a few users that their device has this issue while charging also. Well, you can try the methods suggested below to avoid this issue simply.

It’s again worth mentioning here that Nokia 3 is a decent performer and although the cameras are good enough to be trusted, a few users have experienced this problem recently. If you are one among them, the following methods are good enough to keep up the pace.

By default Nokia 3 comes with a 16GB ROM and those who don’t use a microSD card need to connect their device with a PC for data transfer. Also, users can have several other reasons for creating a stable wired connection between the device and the PC. If the device doesn’t recognize the PC or the vice-versa, you can proceed with the following methods.

Performance is something that can easily be impacted by a lot of factors. The fact is a device has to work with so many apps and other tasks and it’s not always necessary that they have a similar nature. Performance related issues can be avoided through the methods and instructions mentioned below

These issues are often mistaken as hardware problems but as a user you should keep this in your mind that it’s not always necessary. Connectivity issues could be due to several other reasons that most of the users really don’t know about. Therefore you should try the following methods before you visit the authorized repair shop to get your device checked for a hardware fault.

Nokia 3 has been provided with a 5-inch screen. Of course, the device cannot perform any task if it fails to perform its task. Therefore you should take appropriate action against this fault. Check them out and probably you will make it functional again with them.

Nokia has provided a 2630mAh battery with this device. Although it is capable to bear a full day load once charged, a few users are really not in a position to assure this. They have reported to charge the battery again and again due to quick battery drainage and slow charging problems. If you too are facing the same issue, the following methods can considered to avoid the same.

The microSD card industry has been blooming in the present time. This is because growing memory needs of smart gadget users. The fact is with more features in the smartphones, every user now have more memory needs. Therefore the need of using a microSD card is always felt. In case you are not able to use it properly in your device due to any issue, try the following methods to get the things back on track.

Your SIM card is exactly what that enables you to perform most of the tasks through your device in actual sense. This clearly indicates that problems in it can impose a limit on the overall number of tasks that users can perform through their device. Troubleshooting of SIM related problems is a task that is not much complex. If your device doesn’t detect the SIM card or shows similar issues, you can try the following to avoid this issue.

That’s all about the common Nokia 3 problems and fixes. In case you are facing other issues and want to know more about the common Nokia 3 problems and fixes, you can let us know about the same in the comment section below. Also, make sure to get the device repaired at an authorized repair shop in case you cannot avoid the problem through the methods suggested above.