Oppo is a well-known Chinese smartphone manufacturer which has gained a ton of popularity in the recent years. The overall number of factors that have contributed in enabling them gain fame are many. However, there are certain features in their devices that have also enabled them to keep up the pace in this matter. The very first thing that users can notice in any Oppo device is the camera quality. Most of the Oppo smartphones are tagged as Selfie experts and it’s because of the fact that Oppo comes with excellent cameras on their device. Probably, this has attracted the attention of those who love capturing snaps. In this post, you will be introduced with the common Oppo A73 problems and fixes.

The Oppo A73 is actually not a new device. It was released in June 2016 but since then, many users have appreciated it. There is nothing wrong to say that it’s an amazing device. However, it has been reported by a few users that they are experiencing some common issues with this device. Well, this doesn’t actually mean you shouldn’t buy it. In fact, most of these issues are related to Operating System. Probably you know some minor problems are common with almost every Android-based gadget. Thus, you need not to worry about anything. Check out the useful information about the common Oppo A73 problems and fixes in the paragraphs below. 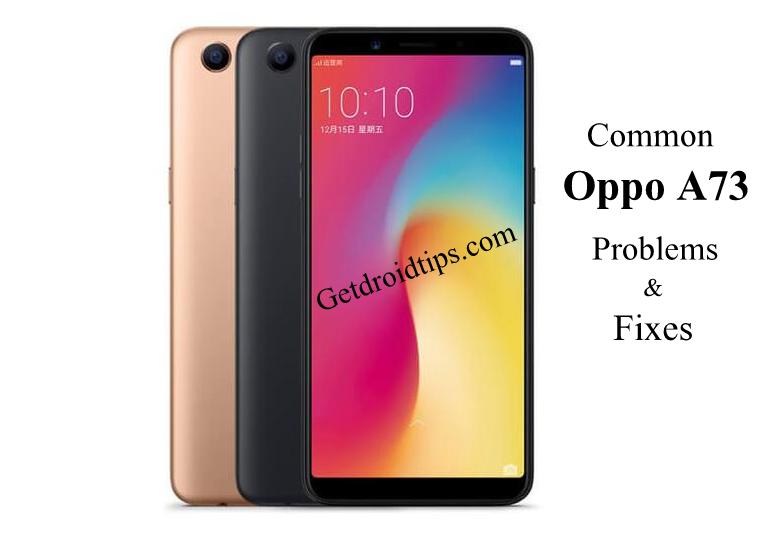 First I would like to introduce you with the hardware and other specifications of this device. It has been powered by Android Nougat 7.1.1 and comes with a 6-inch screen which is best in every aspect. You might have no idea but the same is capable to offer you a full HD resolution. The manufacturer has equipped with a 2.5GHz octa-core processor and the 4GB RAM for assuring performance. Users can store 32GB of data in the device and can extend this limit upto 128GB through a micorSD card.

For those who love cameras can simply proceed with this device. This is because it comes with a powerful 13MP primary and a 5MP secondary camera. As far as the matter of backup is concerned, it has been provided with a 3200mAh battery which is enough to bear a full day load of a modern device like this. You can now check out the common Oppo A73 problems and fixes in the below paragraphs.

Common Oppo A73 problems and fixes

It would probably be good for you to follow the information regarding the common Oppo A73 problems and fixes mentioned in this post in the way it has been instructed. You will probably be able to avoid the issues you are experiencing with this device. Although this guide has been tested, Getdroidtips.com doesn’t take the responsibility of anything that goes wrong while you following it.

In the present scenario, smartphones are not designed to perform all the tasks themselves. They actually depend on a number of things for their smooth function. One example is a Wi-Fi router. Although the world is enjoying the 4G revolution, some tasks can only be performed through a stable internet connection. When it comes to stability, a Wi-Fi connection has no comparison. However, some users reported about the Wi-Fi and other (Bluetooth) connectivity issues in this device. Check out the methods below to avoid them.

Well, if this is an issue with your device, there is no need to worry about the having hardware fault. In fact, this issue is often mistaken with the same by several users. You should first try the following instructions to eliminate this problem.

It is very necessary for any modern gadget to show smooth behavior when it is connected with another gadget and especially with a PC. However, it has been reported by a very few users of this device that they fail to keep up the pace with data transfer and other important tasks when they connect it with PC. If you too are experiencing this problem, try the methods as suggested below.

Devices are always expected to perform well when any task involves the use of cameras. However, users often have to compromise with the quality of pictures. It is not always necessary that the bad quality snaps are the results of camera problems in the device. There can be certain other factors that can influence the same. You can try the following to keep up the pace.

The extra heat dissipation is the exact cause of this problem. It generally happen when a device is engaged to perform tasks that are bulky and time consuming. Probably you need not to worry as this is not a hardware issue. The fact is it’s a minor problem and can easily be avoided. Check out the below methods and instructions for this.

When it comes to performance, manufacturers have to pay a lot of attention to the same. The fact couldn’t be denied that still many device face this problem. This is due to the large dependency of modern gadgets on Android and apps which are designed on different platforms. Thus, slow performance of the device doesn’t always mean a hardware glitch. Try following methods to avoid this issue permanently

Users in the present scenario often have more memory needs than what the manufacturers provide in the devices by default. This is where you need to use a microSD card. However, in case you are not able to use it properly on your device, try the following methods.

The 6-inch screen Oppo A73 (2018) has been equipped with seems quite reliable to use and actually it is. However, as a user you should keep in mind that there are certain issues that can fuel toucscreen problems. Therefore a device needs to be properly examined when you face any issue related to the screen. In case the same is not responding to your given instructions, the following instructions and methods can help you

It is not always necessary that only device is responsible when SIM card fails to operate properly. If you are facing SIM related issues in your device, the following methods and instructions can help you avoid this problem.

Fast battery drainage is one of the major problems modern devices are facing. Even the manufacturers are struggling a lot to come with devices which are capable to provide standby time which is far beyond the expectation of users. However, sometime devices consume more juice from the battery even if they are left untouched. This problem could be due to many possible reasons. Try the following to avoid it.