Samsung is one of the well-known Smartphone manufacturing brands in the current time. The best thing about them is they come with a full range of smartphones that have price range affordable for one and all. You might have no idea but the fact is Samsung gadgets are simply good enough to be trusted. The users can always get what they invested for and Samsung never let them compromise with anything. The vast support, quality, phones in almost every price range, simple the best features, are some of the major reasons for their success. In addition to this, coming with smartphones that are totally user-friendly also enable them to keep the pace all the time up in this matter. In this post, I will introduce you to the common Samsung Galaxy On7 Prime problems and fixes.

This device is well-known in the market and users have reviewed it one of the best gadgets Samsung ever introduced. Although it is good in every aspect, there are some common problems that have also been reported by a few users. You might be wondering about the quality of the device after reading this statement. Well, I would like to let you know there is nothing to worry if you need to buy this gadget. This is because most of the reported issues are basic and are actually related to Android. They are common in most of the phones based on Android. You can simply make them go from your device. Check out below the information on common Samsung Galaxy On7 Prime problems and fixes. 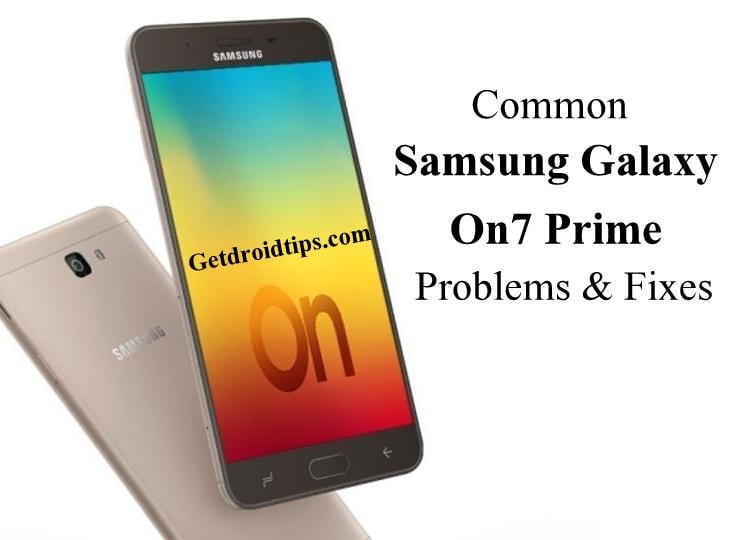 Prior to discussing the common Samsung Galaxy On7 Prime problems and fixes, let us first pay attention to the hardware specifications of this phone. This will actually help you to get more out from the methods discussed in this post while troubleshooting your gadget. Samsung has powered this device with a 5.50-inch touchscreen with 1080 x 1920 pixels resolution.

It has a 1.6GHz octa-core processor that make sure users need not to waste the time just because of tasks that need more time. As far as the matter of RAM is concerned, it packs a 4GB RAM and 64GB ROM for storing the data. This device comes with a 3300mAh battery and you need not to worry about the backup due to very same reason. Samsung has powered it with Android 7.1.1 Nougat which makes sure of reliable performance. The 13MP primary and the 13MP secondary cameras let the users capture their precious moments simply. Let us now come to the common Samsung Galaxy On7 Prime problems and fixes.

This device has been introduced in January 2018. Later or sooner you can also experience the issues mentioned in this post and thus it would be good to gain knowledge on the common Samsung Galaxy On7 Prime problems and fixes. The methods are trusted and work reliability on all the Samsung gadgets that comes in this class. Thus you can proceed simply. It must be noted that Getdroidtips.com cannot be held responsible for anything that goes wrong while you follow this guide due to your own mistake.

Most of the tasks that a Smartphone can perform depend largely on the nothing but the internet. Although most of the devices are 4G enabled, the fact is a stable internet speed can only be assured when the device is connected to Wi-Fi. Also, Bluetooth connectivity is important to perform many other tasks. However, it has been seen that the devices having connectivity issues related to both are becoming common. You can try the following methods to avoid them simply.

Non-operation of Scared is a major problem for many users. It actually wouldn’t let them enhance the overall memory of their device which is becoming a common need due to advancement is smartphone technologies. In case you are facing this problem, you need to pay attention to the following factors.

Performance related issues always seem critical to deal with but it is not always necessary that they are. You can avoid them simply by gaining some useful information about them. There is actually nothing to worry as you can probably get the favorable outcome. Go ahead with the methods below simply.

In case the battery of your device is draining too quickly and it is taking more time for charging, you actually need not to worry about anything. This is because the fault can be due to many possible reasons you might not familiar with. Therefore try the methods which have been listed below.

This problem could be due to reasons that might be exceptional for the users. To avoid it, the method that can help you is spotlighted below.

It is always a good idea to gain knowledge about the SIM related common Samsung Galaxy On7 Prime problems and fixes. This helps you to avoid most of the issues in a very reliable manner. Check out below the methods that can help you in this matter

Although there are several features smartphones are equipped with these days. Poor quality of cameras can be the alone reasons why users often need to change their gadgets. In case you are facing this problem on your Samsung Galaxy On7 prime, you can try the methods and instructions below.

Don’t think this problem is always there due to OS. There could be other reasons too for this. To know about them, you can check the below points

The unresponsive touchscreen is a problem which you can avoid simply by the methods that has been spotlighted below.

Smartphones are widely engaged in several tasks in the present time. Many users use them for long hours and perform various tasks. On an average basis, a user spends around 5 to 10 percent of the time in a day using his/her smartphone. Well, this gives these gadgets good reasons to have this problem. However, the fact is there is nothing to worry. The same can be avoided through the methods listed below.

This is all that you should know about the common Samsung Galaxy On7 Prime problems and fixes. For more information on this topic, you can comment on the below section. In case the problem still exists after following this guide, you can simply proceed with the Samsung official support.