With respect to the increase in demand and popularity of the smartphones, many manufacturers have come up and have become popular. Gone are those days when Samsung, Motorola, Nokia and Apple were the only game players which ruled the international smartphone market. In the present scenario, there are a lot of manufacturers which are best in every aspect and have provided smartphones which are good enough to be trusted. ZTE is a trusted brand and there are a lot of users of their smartphones which have considered them best in every aspect. A few of their devices has got an excellent response after the launch. One of them is ZTE Nubai Z11. Today we are going to introduce you to the common ZTE Nubai Z11 problems and fixes.

This device was launched in the middle months of 2016. Because, most of the users purchased it and are using it since, they are now complaining about the common issues they are experiencing in this device. Another reason for the issues could be ZTE Nubai Z11 is still running on the Android 6.0 Marshmallow. The manufacturer has not yet indicated when the next update for this device will be made available. However, you need not to worry about anything. In this post, we have reflected the best information on the common ZTE Nubai Z11 problems and fixes to help you keep up the pace simply. 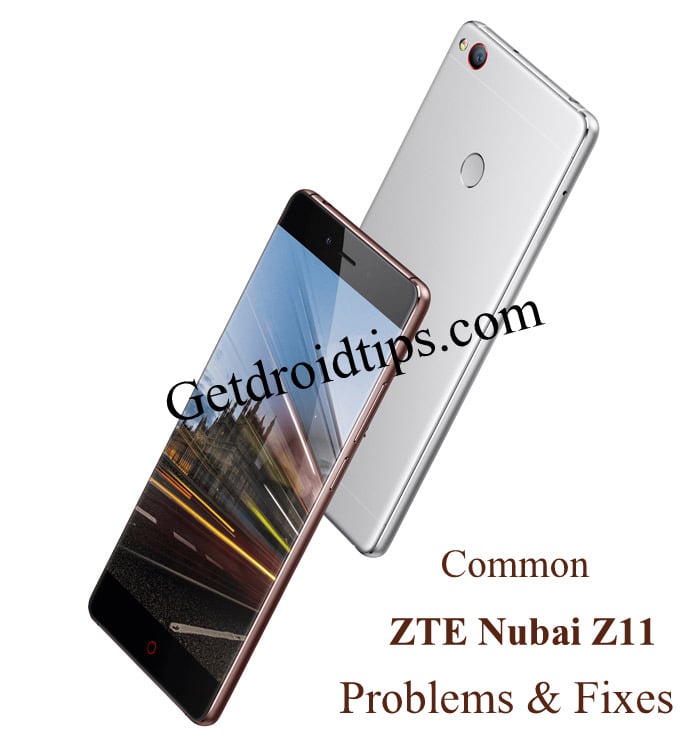 Let us first check out some useful information about the hardware specifications of this device to enable you get the best results through this guide. As already mentioned, ZTE Nubai Z11 is running on Android Marshmallow 6.0. It has 5.5-inch touchscreen display which is capable to offer the users an excellent screen resolution and i.e.1080 x 1920 pixels. The manufacturers have provided it with a powerful 2.15GHz octa-core processor to enable it offer performance irrespective of the task assigned to it.

Next good thing about this device is its 6GB RAM and 64GB ROM which makes it simply the best device. Of course, it is capable to provide performance as the 6GB RAM can simply be trusted for speed and reliability. It is possible to extend the storage of this device through an SD card by upto 200GB. As far as the matter of cameras as concerned, the ZTE Nubai Z11 has been packed with a 16 MP primary camera and 8MP secondary camera for capturing your best moments. Despite have best configuration and specifications, it is experiencing some minor glitches. Check out the below paragraphs for the common ZTE Nubai Z11 problems and fixes.

All the information related to the common ZTE Nubai Z11 problems and fixes mentioned in this post has been verified. However, Getdroidtips.com cannot be held responsible if any further damage is caused while you follow this guide.

The ZTE Nubai Z11 has a 3000mAh battery which sometimes doesn’t get charged in the time frame it has to be. Well, if this is a problem you are facing with your device, it is possible to avoid the same. Check out the methods suggested below for this.

Recently a few users reported that this device is having problems related to the automatic adjustment of the screen brightness. The device has been reported to increase/decrease the same when the intensity of light changes. This seems to be a sensor issue. However, it’s not necessary always that it could be due to very same reason. Try the following methods

The ZTE Nubai Z11 is an excellent performer in every aspect. However, a few users have reported that they are facing the connectivity issues in this device. Well, the fact is it’s not necessary that such issues declare their presence only due to a specific reason only. There can be certain factors that can contribute towards this. May be there might be issues in the internet connection or in your router. However, if the same is ok and you are still facing minor issues related to Wi-Fi and Bluetooth, you can keep up the pace simply with the following guide and methods.

The major reason why ZTE Nubai Z11 has been reported to be a slow performer by many users is nothing but the issues that are related with OS. This device is still running on Android 6.0 and it’s true that the overall performance of most of the active devices have gone down since last few months. If you are too facing this issue, following are some of the instructions/methods you can proceed with to boost your device performance up to a good extent.

The poor camera quality is a problem that can simply be avoided if you are facing the same. There are certain factors due to which this problem could be there in your device. Check them out to get the things back on track

There are multiple reasons for this issue and it’s not always necessary that you can find the cause immediately. In case you are facing it, try the following methods to avoid it from your device

This happens most of the time when users perform multiple tasks at the same time. The fact is ZTE Nubai Z11 comes with a powerful 6GB RAM and the same can be engaged in several tasks simultaneously. The quick draining of battery can also be due to several other reasons. Try the following set of methods to keep up the pace simply.

The ZTE Nubai Z11 has been reported to show unexpected behavior or show no behavior by a few users recently. The fact is it’s mainly due to reasons that users cannot always understand. You need to make sure of the following if you are facing this problem.

If this is an issue with your device, try the following to simply keep up the pace in no time

It is possible to eliminate this problem very easily if you are facing it on your device. The fact is it could be due to following reasons and by paying attention to the same, you can avoid them in no time.

Many users have reported that the 5.5-inch toucscreen on the ZTE Nubai Z11 becomes unresponsive while performing some important tasks. This is not always necessary to be a hardware glitch. Try the following set of solutions before you take your device at a nearby service center for repair.

If this is a problem you are facing, you need to make sure of a number of things. This problem mainly declares its presence due to the incompatibility of apps. To eliminate this problem, you can try the following methods

Your device might be showing this problem due to many factors that could be related to the phone or the SIM as well. Make sure you inserted it in the proper manner in the device. Understand the placing patterns on the SIM tray and see if everything is fine. If the problem still exists, try the following methods

The overheating of the device should be due to many factors. It seems to be a hardware fault and many users think the same. However, the device may show such a behavior due to many other reasons also. It’s better to try the following methods to avoid this issue before you reach any conclusion.