So, what is The Last Word in Destiny 2? An awesome hand cannon it and a close-range shotgun. With The Last Word in possession, what you got to do is get closer to the target and just lay on the trigger. However, it isn’t that easy job to get The Last Word.

In case you are finding it difficult to get your hands on the Last Word, well, don’t worry; we are here to help. Here is our guide to help. Let’s begin. 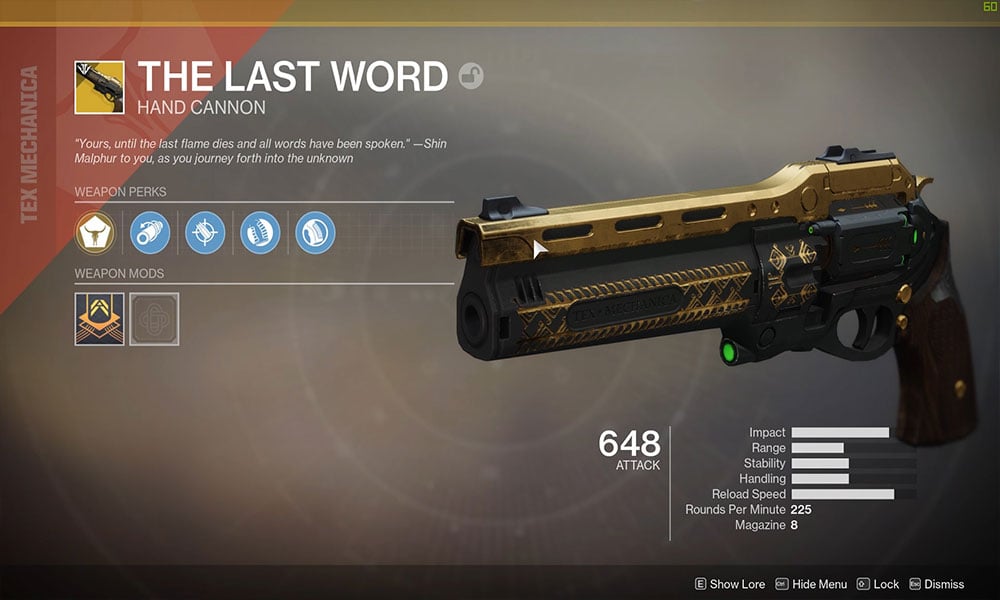 How to Get The Last Word in Destiny 2: The Draw Quest Guide

To get your hands on the Last Word, you will have to go through primarily 4 steps while completing the Draw Quest. So go along and your Last Word.

First of all, you need to start The Draw. For that, talk to the Drifter at the Tower. The Drifter there will, in turn give you a Hive artifact. It would help if you did some kills to cleanse this artifact, i.e., you have to kill the Hive and the Hive bosses.

The best way to be quick with these kills is to go for the Escalation Protocol. Go to Mars and shoot from there. Also, make sure that you use solar subclass, a solar energy weapon (Sunshot is great), and a solar heavy (the Avalanche machine gun is ideal). Thus you will cleanse the Hive artifact.

Now you have got to upgrade the cleansed Hive artifact to The Temptation. This will also be done by the Drifter at the Tower. For upgrading the artifact, the Drifter would now want to kill the Guardians in the Crucible.

To be quick at this job, try to stay alert, lest you be killed first, and aim for at least one 1.0 KDA. If you cannot target this aim, then go slow, play with friends, and get the Guardians killed.

Thus you will receive The Damnation, getting the required number of kills. Now you have to head towards the next mission in the Ogre Lost Sector. This sector is on the left side of the Rig. Before you set on to this mission, make sure that you have crossed level 500 to gain enough power for this mission.

Next, go to the heart of the Lost Sector, to find there a shielded Hive Acolyte guided by two Wizards. Kill these two first while saving your heavy ammo and super for the Acolyte. Now you have to be swift with killing the Hive Acolyte. This is because its shield will come back in some time. If that happens, then you have to kill the Wizards again.

After killing the Hive Acolyte, go back and talk to the Drifter. Now you will be asked to sully your light. This step includes four objectives, which are discussed one by one below.

The first objective is to get 15 Etched Crystals and the 50 Hive Larvae. This you can easily get if you run the normal version of the Ogre Lost Sector. Kill the enemies and get the larvae and kill the boss Ogre who will drop an Etched Crystal. You will have already cleared this sector, but now you need to keep going back to it until your objective is attained.

Go back to the Drifter to receive The Conversation from him and get ready for the next mission, which will be unlocked now. You have to reach the Tangled Shore for this mission. Go to the Thieves’ Landing zone. Here, head south through the Hive ruins. On the way, keep shooting the dudes and put the worm in the wall.

You also have to kill the Wizards as soon as their shields are dropped. Shoot the big crystal, and at last, when you reach the big hole, jump into it.

Inside the hole, your health regen will be suppressed once you land in the Broodhold. You have got to take a straight path up to the Hive plate. Now you have to stand on the Hive plate, which will make Enkaar, the Anointed to appear holding a blaster. Along with it will appear a progress bar that reads “Steady…” This bar will be filled by and finally, all your toil will yield fruit, and The Last Word will appear on the plate.

Draw The Last Word and shoot the Enkaar’s blaster. Be quick and shoot the weapon of Enkar as soon as it starts glowing. If you delay here, you will die before accomplishing the task.

To keep The Last Word, you need to face off with Enkaar’s clones three times on three different plates. Kill all the enemies, and shoot the Enkaars. Then go to the Drifter with The Last Word.

Well, that’s all you need to do in order to complete the Draw Quest and get your hands on The Last Word. Now, check out our Gaming Guides, Windows Guides, Social Media Guides, iPhone, and Android Guides to know more. Subscribe to our  YouTube Channel to watch some awesome videos on gaming and smartphone tips and tricks.