Shotguns are among the best weapons you will find in any shooter game, including Destiny 2. They are excellent equalizers in PvP, and crucial for your survival in PvE. There are several types of shotguns in the game, and inevitably some are superior to the others. So we have decided to bring out picks for the best shotguns in Destiny 2.

As we have entered in the last two months of the Season of the Worthy in Bungie’s popular free-to-play shooter looter, Destiny 2. Guardians must keep up with the pace to defend the Last City and power up Rasputin once again. Needless to say, you need some seriously powerful weapons in order to survive long enough in the mission, and one of these includes the Shotguns. Now that’s being said, let’s get started.

Here are the best shotguns in Destiny 2 – Seasons of Arrivals. If you want to excel in PvP and PvE matches, you need to use any of these. 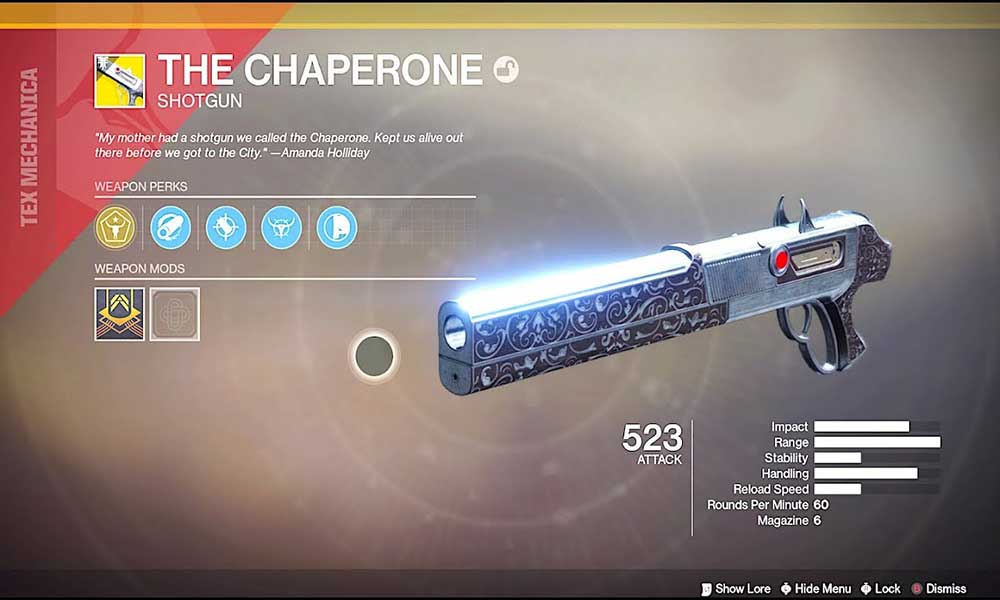 Shotguns, both in-game and in real life, have the ability to fire a large spread of tiny projectiles that inflict serious damage over a large area. This spread, as it is called, is an ideal requirement when you engage in close quarters combat with enemies. However, it is not very effective when you need to hit a target at a long distance. In that regard, the Chaperone is unique because it possesses the precision slug perk. This allows it to fire a single round that inflicts immense damage. Thus, you can use it to successfully strike a foe on the other side of the area.

Thanks to its heavy damage, long-range and high rounds per minute, the Chaperone is an ideal choice for both PvP and PvE matches. It is powerful enough to get you through the Trials of Osiris as well. You can apply the hand-laid stock upgrade to enhance this weapon’s stability, and the Roadburn upgrade to obtain even more stability, range, and precision damage following a kill. Overall, it is a lethal, versatile, and cool-looking weapon that is highly recommended! 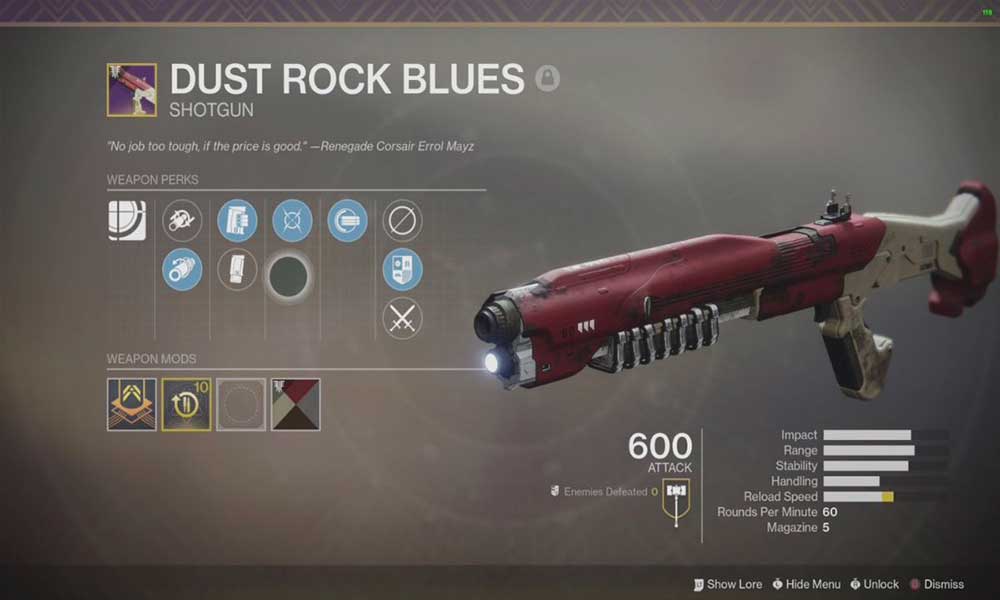 By virtue of its moving target and perk opportunities, this shotgun is now a weapon of choice for gamers entering the Trials of Osiris. Moving target greatly enhances your speed and target acquisition when aiming down the sights while in motion. As you know, it is important to keep constantly moving in the Trials of Osiris. Thus, this shotgun comes in handy to help you neutralize your enemies and get through this mission alive.

When coupled with rampage, moving target is even more effective. Rampage helps you obtain boosted damage following a kill, which will stack up three times. Accurized rounds will enhance this shotgun’s range; thus, you will be able to strike targets at a much larger range successfully. And finally, the full choke will decrease projectile speed when you are aiming down this weapon’s sights. By rolling slide shot, you can partly reload your shotgun’s magazine while increasing stability and range.

This is a perfect weapon for getting you through the Trials of Osiris. It possesses enough damage, flexibility, and movement speed to help you perform excellently in PvP and PvP alike. 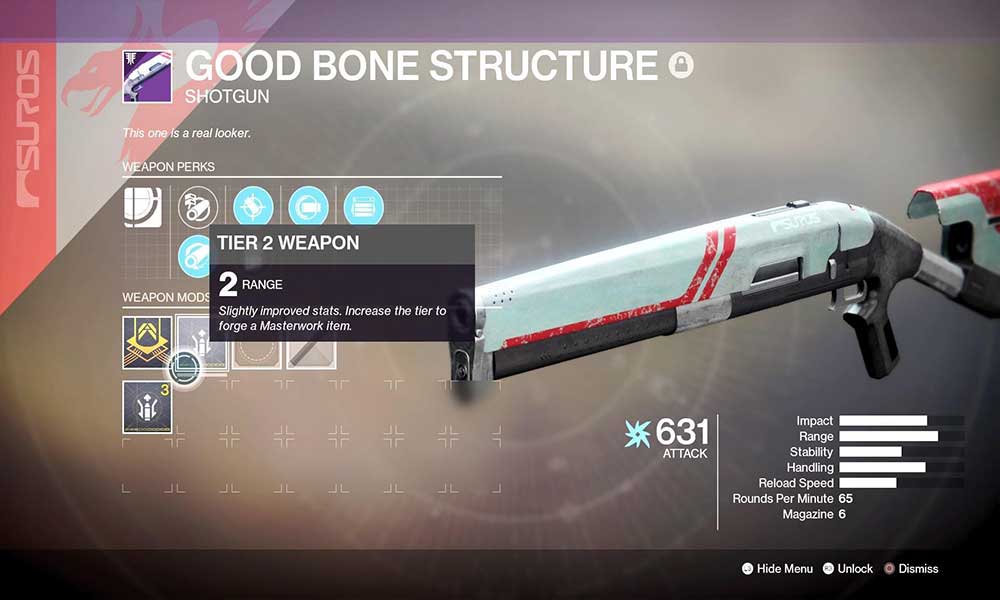 Versatility is an important virtue of a guardian. For that, you will require armors and weapons that can serve you reliably in different kinds of scenarios. One such versatile weapon is the Good Bone structure. It is especially recommended if you are a beginner because it helps to even out the playing field a bit. You will benefit from this shotgun even if you are not familiar with advanced strategies in the game.

The shotgun’s precision frame perk allows it to let forth a single slug round. This turns the recoil pattern vertical and more predictable. The high caliber rounds perk will enhance your weapon’s range, and also push back your foes when it strikes them. This can help you keep a distance from them when needed. The outlaw perk will reduce its reload time following every precision kill. This will allow you to shoot down opponents even faster.

Thanks to its very balanced stats, this shotgun is a great choice for both PvP and PvE matches for veterans and newcomers alike. 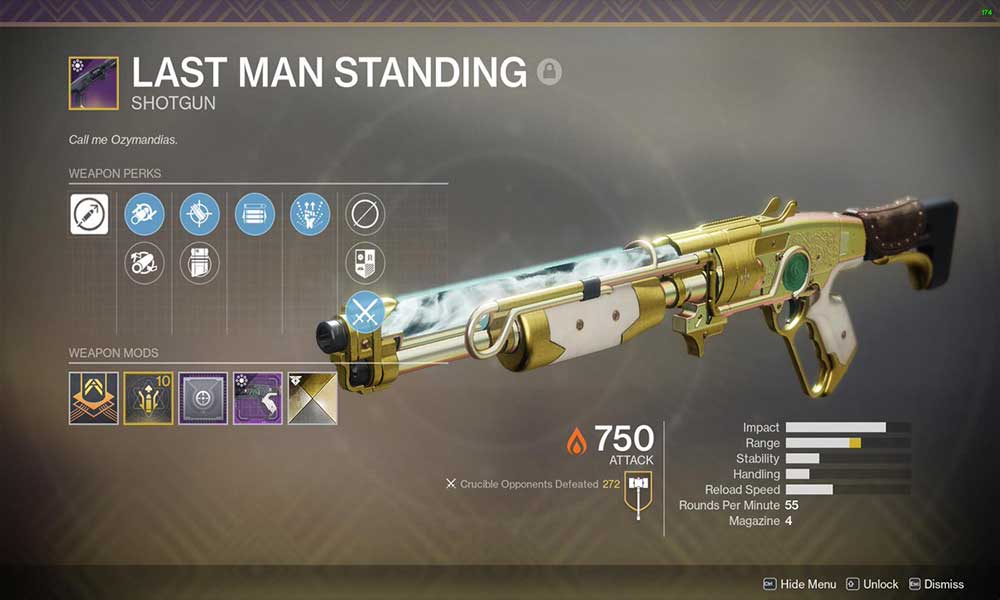 This is a weapon of choice for players who prefer an offensive style of gameplay. It is especially useful for close-quarters combat. You can use it to unleash some devastating melee attacks as well. The aggressive frame perk boosts this weapon’s rate of fire following a kill. The full-auto trigger system perk allows you to shoot continuously by holding down the trigger. The one-two punch perk deals extensive damage when paired with an appropriate gauntlet, such as synthoceps. It boosts your melee strength whenever every pellet in your shot strikes a foe. You will be able to take down most enemies in very less time by virtue of melee attacks and properly timed shots.

Although this weapon’s features comparable to those of the Mindbender’s Ambition, the right perks could make this a superior choice. This is also the only shotgun possessing the demolitionist perk. This returns 20% of your grenade after you have used it. After combining this perk with a rifled barrel and accurized rounds, your shotgun will be able to strike targets at long ranges, and also shoot forth grenades in the duration between accurate shots!

The Legend Of Acrius Shotgun 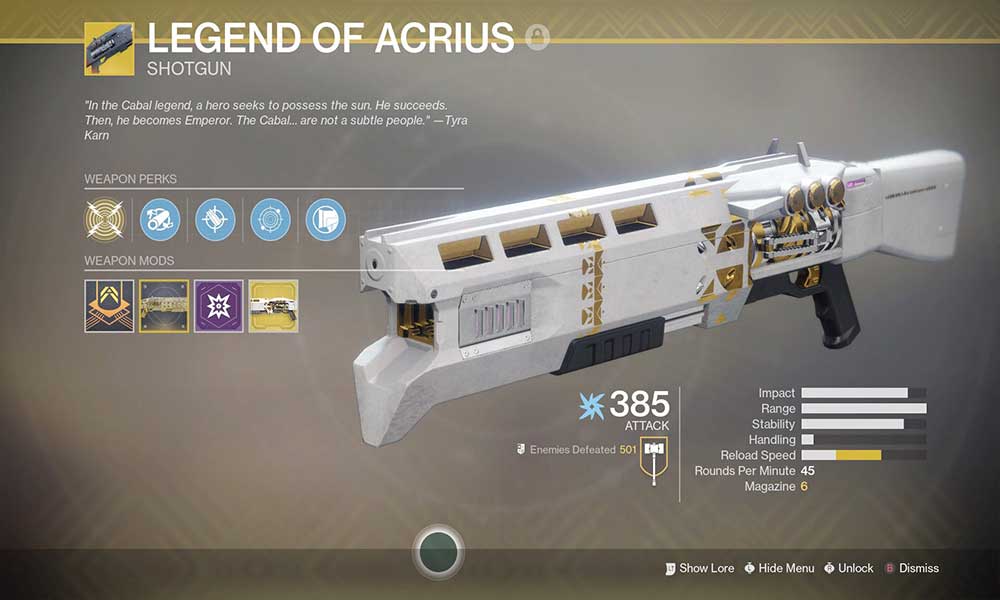 Although the Chaperone is versatile and has an incredible range, it does leave something to be desired in terms of sheer power. If you hope to take down foes with greater speed and stun them as well, the Legend of Acrius shotgun could just be your weapon of choice. It possesses some of the choicest damage per second stats in Destiny 2. It is so powerful that if you manage to surprise an unsuspecting opponent and unload a few rounds into them, they will be forced to flee or be killed right there. In case you feel you can take down an entire group of enemies before being slain, this could be just the right weapon for you.

This weapon’s greatest asset is the sheer amount of brute strength it possesses. Its shock blast perk can go right through your opponents while unleashing some lethal arc energy. By virtue of the extended march perk, you can spot opponents from a much higher distance. The accurate rounds will help you fire ably across long ranges. You can even combine both these perks to strike down foes before they even notice you! Fitted stock will enhance target acquisition and boost your speed when you are in motion while looking down your weapon’s sights.

All these features make this shotgun a great choice for PvP matches. You can use to create panic among your opponents while you unleash this weapon’s deadly firepower upon them. 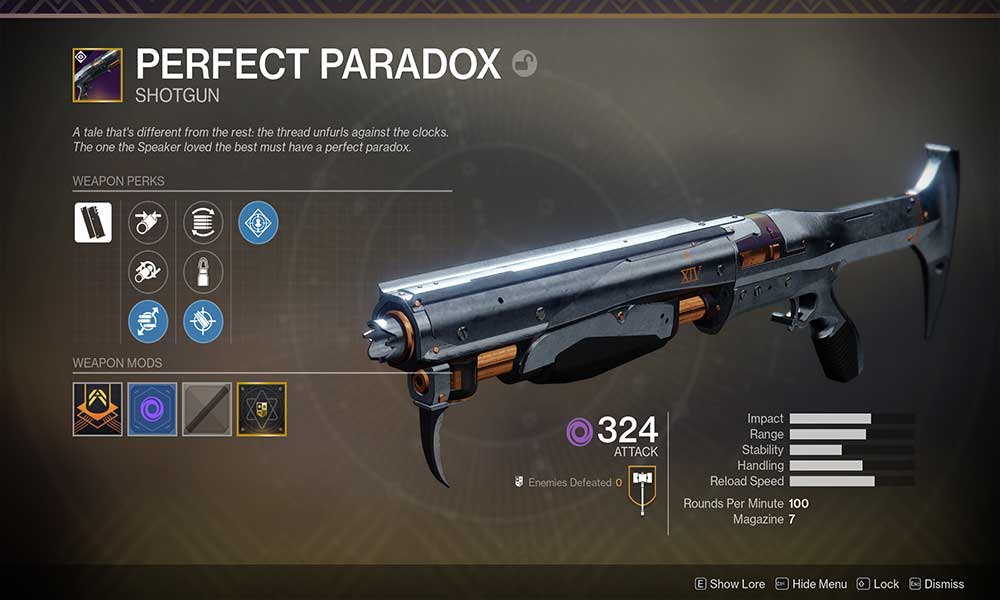 At times, you can find yourself in a situation where the sheer amount of enemies you face becomes overwhelming. In such times, you require a weapon that can mow down these hordes of foes without too much effort. An excellent choice for such a scenario is the Perfect Paradox shotgun. It is powerful enough to clear out large groups of attacking foes with relative ease. In fact, it can take down the lower level bosses and even some of the major ones with the right perks. This can help you successfully handle some otherwise fatal situations.

This weapon’s rapid-fire frame perk provides deeper ammunition reserves to you. That makes this gun completely automatic. You will be able to reload it much faster when it is empty. This will allow you to down your entire magazine into your opponent, reload and resume firing before they have a chance to retaliate. The demolitionist perk with restore 20% of your grenade, whereas the swashbuckler perk will increase your damage whenever you neutralize an opponent. And the best part is that this benefit will stack thrice! That allows you to wipe out large forces of attacking foes without even breaking into a sweat.

Although this weapon is generally preferred during PvE matches, it can perform excellently in PvP with the appropriate perks as well. The opening shot perk will help you get extra damage for the very first shot in combat, range MW will enhance bullet magnetism, and the slideshow will partly reload your shotgun and also boost your damage and range when sliding. The light mag perk will enhance your range and reload. Finally, the full choke perk will decrease projectile speed when you are aiming down your weapon’s sights. 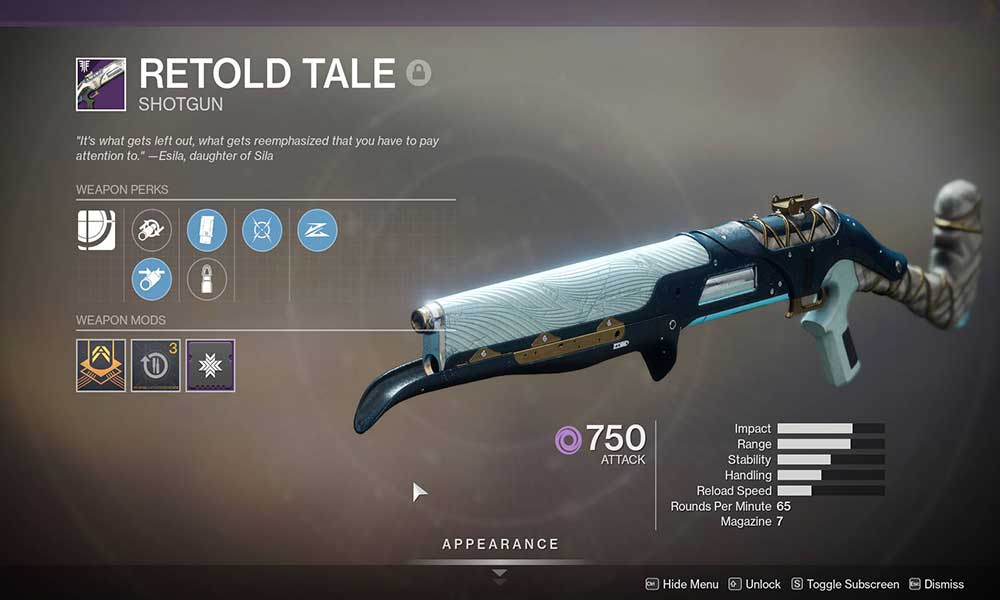 This is one of the most popular weapons in the game, mostly due to its fun perks. The full-auto trigger system perk helps you fire continuously by holding down the trigger, while the precision frame enhances your weapon’s range and enables you to predict recoil better. The full choke perk enhances the gun’s range and reduces the handling speed while looking down its barrel.

Accurized rounds extend this energy shotgun’s range by 10. Assault mag gives you an additional 10 rounds per minute and enhances stability by 15. This makes it an excellent weapon for fast-paced battles. By combining snapshot sights, quickdraw, and assault mag, you can draw and aim with this weapon much faster. That will make it an excellent choice for PvP matches. This is a versatile shotgun and definitely one of the best options in Destiny 2. 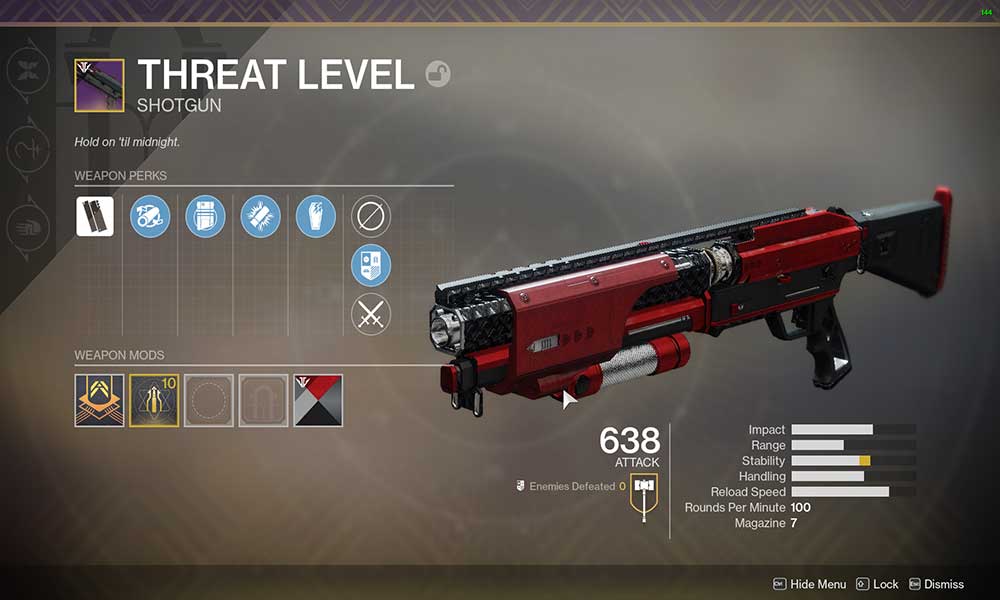 After the full auto shotguns were done away with during the sixth season, the Threat Level became one of the most important weapons for guardians. This is mainly by virtue of its extremely powerful perks and a dazzling rate of fire. The rapid-fire frame perk provides deeper ammunition reserves to you and makes this a completely automatic gun. Similar to the Perfect Paradox, you will be able to empty your magazine into your foes, reload and resume firing before they can retaliate. The grave robber perk partly reloads your weapon when you make a kill using a melee attack. This will enable you to swiftly move your focus to the next opponent.

By combining the surrounded and threat detector perks, you will be able to take on hordes of attacking foes. Surrounded will provide you with additional damage when there are three or more foes in the vicinity. Threat detector enhances your stability, reload, and handling when there are opponents near you. Similarly, the genesis and trench barrel perks make an excellent combination for PvE matches. Genesis will refill your gun from reserves when you shatter an opponent’s shield. On the other hand, a trench barrel boosts your handling, damage, and reloading after you successfully strike an enemy with a melee attack.

By adjusting the roll you acquire, you can get more options to choose from, and try out a number of combinations of perks. That will give you a serious advantage on the battlefield if you put together a good one.

You can use any of these shotguns to strengthen your guardian in Destiny 2 significantly. They have their varied advantages in different situations and matches, but all of them will help you move up the ranks on the leaderboards. They will also help you obtain several other useful armors and weapons in the game. However, you will have to grind a lot to obtain most of them. Do not give up, and keep trying to get at least one or two of them. It is worth the effort!

That is it for now. We hope our guide helps you get acquainted with the best shotguns in Destiny 2. If you liked this guide, remember to check out our other Windows Guides, Gaming Guides, Social Media Guides, iPhone Guides, and Android Guides to read more. If there are any queries or suggestions, comment down with your name along with the email ID, and we will reply shortly. Also, subscribe to our YouTube Channel to watch awesome videos on gaming and smartphone tips and tricks. Happy Shooting!