Apple users can now download Apple iOS 12.1 Developer Beta 3. It brings some bug fixes and improves the stability of the device. The latest beta software knocks in with a new build number 16B5077c. It has almost all the same features which the previous iOS 12 Developer Beta 2 packed. There are the 70 new emojis from the Beta 2. No additional emojis come with latest Beta 3. Most importantly, the latest beta software enables e-SIMsupport for iPhones from US tele-carrier such as Verizon, AT&T etc. 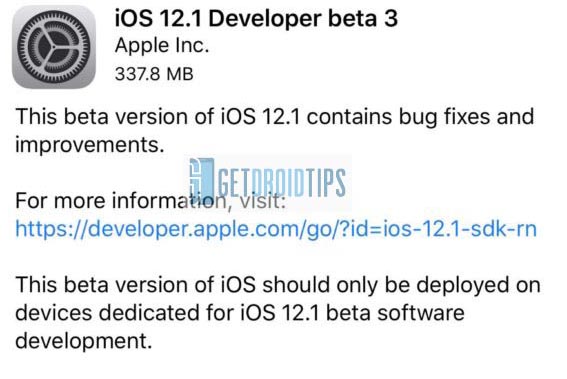 Some users were reporting Group Face time crash which is now fixed by the latest iOS 12 developer beta 3. Also, the latest beta update enables the users to manually adjust the depth while taking a portrait mode photo. Usually, this is done only after you click a photo.

You can download Apple iOS 12.1 developer beta 3 only if you have an Apple developer ID. Besides this is a beta software that brings bugs. So, if your device is a daily driver, may be you would not want to see it buggy. The update is rolling over the air and it weighs a massive 337.8 MB. As it is a large update, you can use Wi-Fi to download it. Go to Settings > General > Software Update. Check for the update if it is rolling yet. If the OTA shows up, download and install it.

So, that’s pretty much it about the latest beta iteration of iOS 12. So, download Apple iOS 12.1 developer beta 3 and fix up the bugs on your device.