Apple Watch users can now Download Apple WatchOS 5.0.1 which brings important bug fixes. The latest update fixes the bug which caused some users to see an increase in the exercise minutes. Also, some users reported of not receiving Stand credit in the afternoon. That issue is now resolved with watchOS 5.0.1. More importantly, it patches up a bug that may stop the device from charging. This latest watchOS update sizes to 37.3 MB. 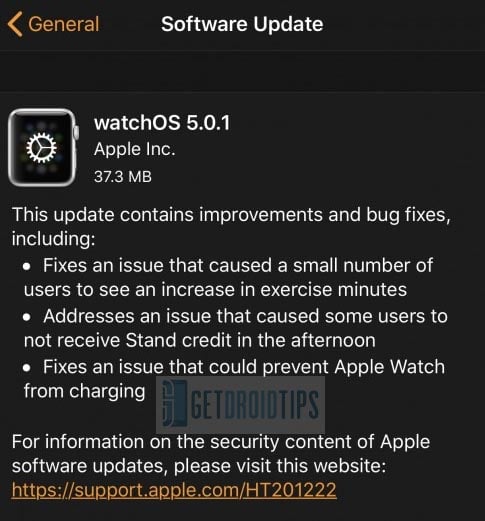 To download Apple watchOS 5.0.1, open up the Watch app on your iPhone.Tap on the My Watch > General >Software Update> Download & Install. Make sure that your Apple Watch has 50% or more charge on it. Ensure not to restart your device or remove it from the charger while the update process is going on. Also, find a Wi-Fi and connect to it for a faster update.

It’s great to see how Apple is so damn efficient in software support. The watchOS 5 released last week and in no time Apple fixed up the bugs with the new software. Apple released its new Watch Series 4 along with 2018 iPhones.

As it is a major bug fix update, make sure to download Apple watchOS 5.0.1 when it rolls. Do share your experience using the Apple Watch post the 5.0.1 update.