Usually, tele-carriers always roll out updates quite later than usual. However, breaking the norms US carrier T-mobile is seeding the latest June 2019 security update for Galaxy S9 series. It only brings the security level step-up and device improvements with some bug fixes. Interestingly, it doesn’t bring the Night mode for the camera like the Exynos version of S9 has been getting in some regions. The new software for Galaxy S9 and S9 Plus is knocking in with the build numbers G960USQS5CSEA and G965USQS5CSEA respectively. 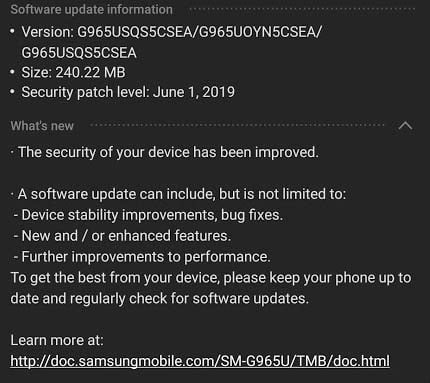 The June software update G960USQS5CSEA is rolling over-the-air. Usually, it rolls into the devices automatically. Then you will be notified of the same and Your Galaxy S9 & S9 Plus will install the update on its own. However, it may not be available in all the regions at one time. The software weighs around 240 MB.  You have to manually search for it. To do it,

Go to your phone Settings > System Update > tap on Check for Latest Updates.

If the G960USQS5CSEA and G965USQS5CSEA update show up then download and install it by following the instructions you see on your device display. To save your data charges, use Wi-Fi to download and install the update. Also, keep in mind to charge the battery of your device completely before installing the June 2019 security update on your T-Mobile Galaxy S9 and S9 Plus. It will help you to curb any power related issues while you’re busy installing the software update.

So, watch out for the June security patch for T-Mobile Galaxy S9 and S9 Plus. Make sure to grab it and install.