Recently Facebook has been facing severe data leaks of its users to some 3rd party websites. Facebook has been trying to fix this issue for a long time. Reportedly, Facebook; Social Media Giant is now working on a new feature that can protect data of its users. Yes, they are working for a feature for unlocking the messenger app more securely.  The new feature which protects the app is none other than the “Face Id”.

According to the latest tweet from the developer, Jane Manchun Wong. The upcoming Face ID feature of Facebook Messenger is still under development and this can be enabled right after the user leaves the Facebook app or after a particular duration.

It seems Face ID will NOT be sent to, or stored by Facebook’s servers, according to the description shown in the screenshot pic.twitter.com/pqBQAjOrnd

“Facebook Messenger is working on the “Face ID” app lock. It can be enabled right after the user leaves Messenger or after a duration. It seems Face ID will NOT be sent to, or stored by Facebook’s servers, according to the description shown in the screenshot” this was contained in Jane Manchun Wong’s tweet. 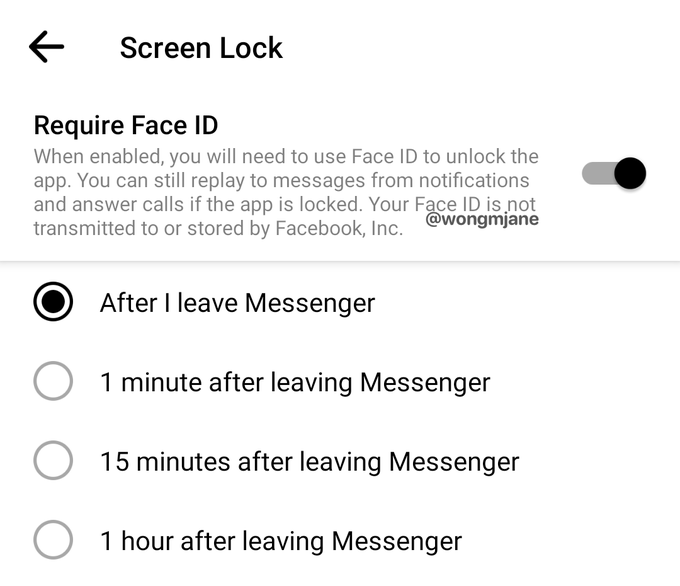 Further, Jane Manchun Wong has also added that the above feature is from an Android device. Because if someone hears Face ID will automatically think about Apple’s feature. He clearly states that this is not the Face ID feature that is found on Apple devices. We are expecting that Samsung will change its name to avoid issues. Since Apple has already patent for “Face Id”.

Can we confirm this?

The best part of this is that the data of Face ID doesn’t seem to be sent to or rather store data on Facebook’s servers. This is on the basis of the above-attached screenshot. But there are certain flaws in the screenshot as well. So as of now, we can’t confirm this new Face ID feature. We request you guys to have a proper look in the screenshot and you could see something fishy right? You might have found the spelling of “reply” as “replay”. This is weird right? This is why I have said earlier that basis on this screenshot we can’t confirm anything.

We will have to wait for more time when Facebook officially announces something about the upcoming Face ID feature. Or we have to wait for more leaks to confirm this. But what happens if leaks are coming with this type of flaws. Let us know your thoughts in the comment section and stay tuned with us for more information.