The very first software update for the Samsung Galaxy watch is now rolling. It bumps the new software build number R800XXU1BRH3. Samsung has always been efficient in dropping updates fast for its flagship products, let it be a smartphone or smartwatch. In many parts of the world, the new smartwatch is yet to arrive, but the update is marking its presence first. This latest software just brings some basic bug fixes. As you can see below the changelog mentions of improvements to Samsung health and device stability. The software only weighs 33.04 MB. 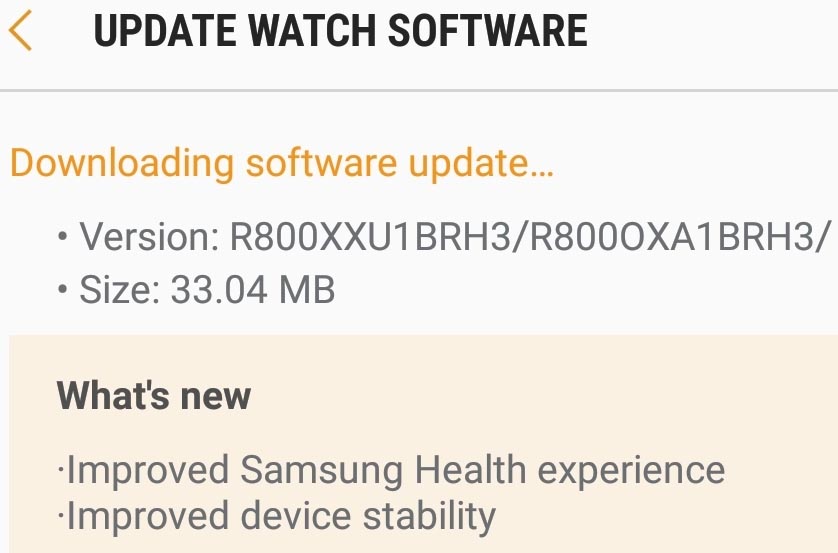 The OTA will gradually knock into your respective watches. To download it, go to Settings > Apps > Galaxy Wearable on your Samsung Android device. You can download the R800XXU1BRH3 update using Wi-Fi or your phone’s carrier data. Recently Samsung rebranded the Gear App into Galaxy Wearable.

Galaxy Watch is the successor to the Gear S3 smartwatch. It jointly released along with the Galaxy Note 9.  With this release, the OEM rebrands the Gear S series as Galaxy Watch. Ditching all the rumors of switching to Google’s Wear OS, Samsung sticks to its own TizenOS with the new galaxy smartwatch.

Make sure not to miss the software update, that too a first one for the new device that fixes up the stability.  Do let us know what changes you observe in your Galaxy Watch after upgrading to software version R800XXU1BRH3.