Out of the many items in Animal Crossing New Horizons, the ladder is a very important tool for every player in the game. There are many resources in the game that are stuck up on the high ledges and cliffs on your island. You will come across the need of reaching them at some point in the game. Well, this is when you’ll have to depend on a ladder.

Getting a ladder involves a pretty easy process. But still, it does take a couple of days so you’re gonna have to stay patient. However, there are two methods to get a ladder and one of them is an easy route with which you can get a ladder in just a matter of hours. To find out how to read through our guide on how to get a ladder in Animal Crossing New Horizons.

How to get a ladder in Animal Crossing New Horizons

In order to get a ladder in Animal Crossing New Horizons, the first thing you need to do is unlock Nook’s Cranny. After unlocking the shop, it will be constructed the next day after you decide where to place it. At this time, you’ll find Nook taking a phone call during the usual opening announcement that he gives out. During the phone call, Nook will give hints that more villagers are on the way to the island. In case Nook doesn’t get such a phone call at this point, you might also have to fully construct the museum on your island. 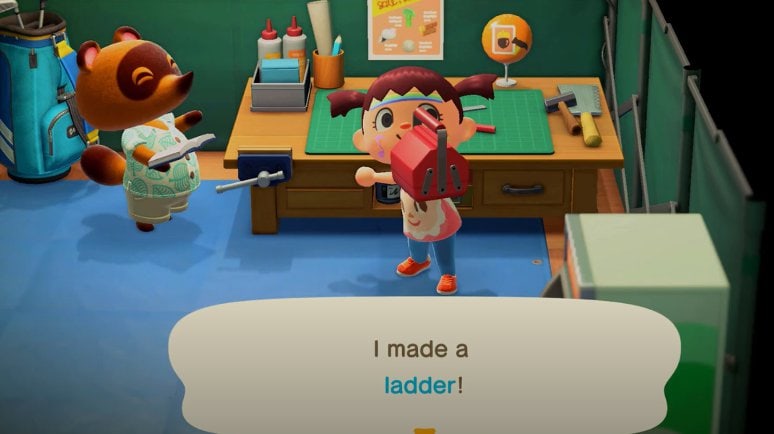 After Nook gives out hints regarding the new villagers that are on their way to your island, head over and pay him a visit in Nook Services. Talk to him and learn about the new villagers that are coming to your island. Keep talking until you get the option What should I do? during the conversation. Once you do get this option, choose it to proceed.

During this conversation, Nook will give you a new recipe for crafting a bridge on your island. If you listen to the conversation with him, you’ll find out that the new villagers who are about to visit you will need a bridge in order to enter your island, hence, a bridge recipe. Once you have the recipe, get all the essential resources to build it. The bridge requires only natural items for construction so it won’t take so long. However, it will take one day to fully construct the bridge so wait for its construction to finish.

After the construction of the bridge is complete, return and visit Nook again. At this point, Nook will hand over 3 housing plots that you can place. In order to get the ladder recipe, you’ll have to successfully place all the 3 housing plots. When that’s done, you’ll get a phone call from Nook. Though the call, he’ll tell you about some furniture that you should craft for these houses. Since the resources for those furniture requires a ladder, he’ll say that he have sent the ladder’s recipe to you. All that’s left now is to collect the resources for the recipe, visit a crafting bench, and finally, craft the ladder.

If you’re not keen on spending a couple of days to get the ladder, then luckily, there is a workaround around that you can make use of in Animal Crossing New Horizons. With this method, you can get a ladder on the very next day of joining the game. For this, all that you need is a Best Friend in multiplayer who already have the ladder unlocked. If you have such a friend, simply ask them to craft a ladder and post it to you.

You might find the second method a lot easier and fast. However, getting the ladder the traditional way as given in the first method is best, especially if you don’t want to lose the adventure the game has planned for you. That said, we hope reading the guide above has brought some valuable information and help to you. Please let us know by commenting down below if you have any further queries regarding the same.