There are a hell lot of options for buying smartphones in each and every budget segment in India. But if you need an Android One mid-range phone there will not be many options for considering. Everyone would suggest the Xiaomi Mi A3 which was unveiled quiet back in India. Earlier today, Xiaomi has also announced a price cut for the Mi A3, but you will rather go with a different brand because Xiaomi isn’t promising in terms of updates. Still, Xiaomi doesn’t start rolling out Android 10 for its Mi A3 users. So there arises a question; which phone does a person who needs Android One phone should go with? Now HMD Global announces that their Nokia 7.2 and Nokia 6.2 will be getting permanent price cuts. So this is the best time to go with these smartphones which are the best alternatives for the Xiaomi Mi A3. 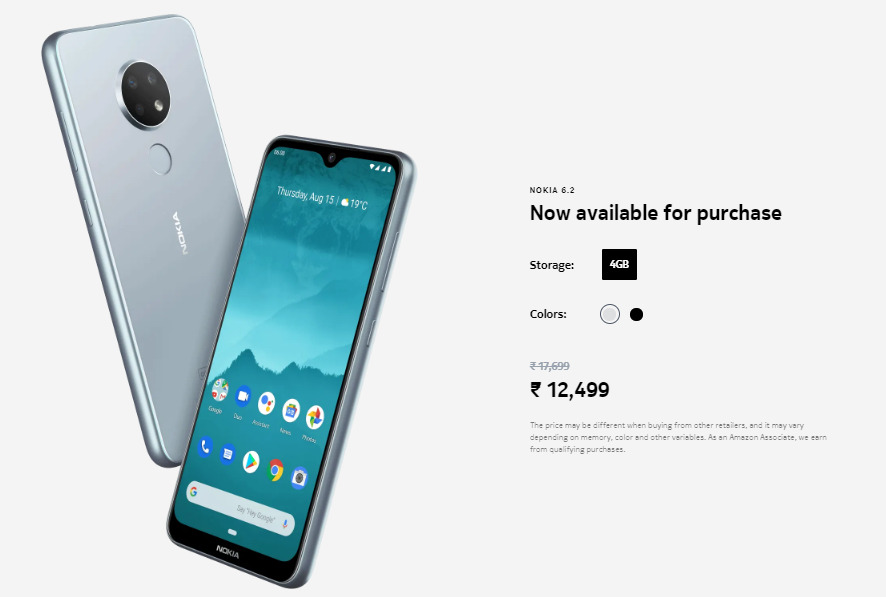 Coming to the new pricing of the Nokia 6.2, the phone will be available for purchase through offline markets in just Rs 12,499 for the single 4GB RAM and 64GB of internal storage. Earlier the smartphone was introduced for Rs 15,999. Now this smartphone is cheaper by Rs 3500 compared to the pricing of the device when launched.

The Nokia 6.2 sports a 6.3-inch Full HD+ waterdrop Pure Display. The Nokia 6.2 has also a design language which similar to its sibling Nokia 7.2. The device gets a 2.5D Glass with Corning Gorilla Glass 3 protection for the rear and sits inside a polymer composite frame. Underneath the Nokia 6.2, Qualcomm Snapdragon 636 powers the smartphone. This chipset pairs with 4GB of RAM and 64GB of internal storage. However this internal storage is further expandable via a micro SD card.

Coming to the optics, the Nokia 6.2 sports a triple rear camera setup. This triple rear camera includes a primary 16MP sensor with f/1.8 aperture value. This sensor pairs with a secondary 8MP ultra-wide-angle lens and finally a 5MP depth sensor. To the front, the smartphone sports an 8-megapixel selfie camera.

The Nokia 6.2 packs a 3,500 mAh battery. And the device runs on Android 9 Pie out of the box. The smartphone is available only in a single color option namely the Ceramic Black color. 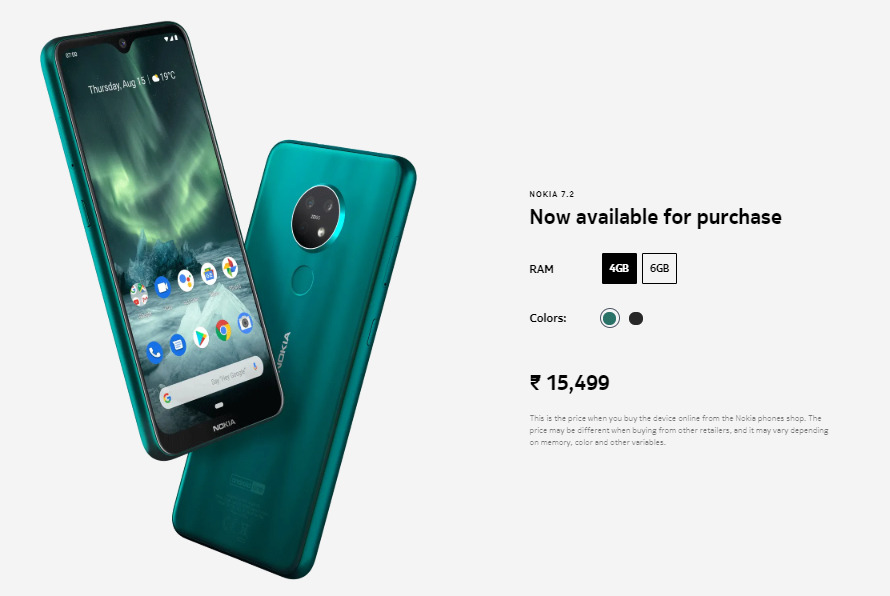 The Nokia 7.2 sports a 6.3-inch Full HD+ Pure Display and HDR-compatible screen with a waterdrop notch. This Pure Display is a tech that has been used by the company in their phones like the Nokia 7.1 and Nokia 8.1. This tech offers higher contrast and wider dynamic range compared to regular LCD displays we see on smartphones. The smartphone also gets a dedicated Google Assistant button. Underneath the device, Qualcomm Snapdragon 660 powers the Nokia 7.2. This chipset pairs with 4 and 6GB of RAM and 64GB of Internal Storage.

The Nokia 7.2 packs a 3,500 mAh battery just like the younger sibling the Nokia 6.2.  As we all know this an Android One device and when launched it was running on Android 9 Pie. HMD Global has pushed out the Android 10 update for the smartphone. The Nokia 7.2 is available in three color options namely the Cyan Green, Charcoal and Ice color options.