Prior to its release, the Honor 8C specification confirms officially. The device is now up for pre-order on a Chinese e-commerce website. It will be the first ever smartphone to pack a Snapdragon 632 SoC from Qualcomm. So, of course, we are looking at a mid-range device. Earlier there was speculation that it will come with Snapdragon 450 chipset. Around two weeks ago, Honor 8C appeared on TENAA, where some of its specs were revealed. 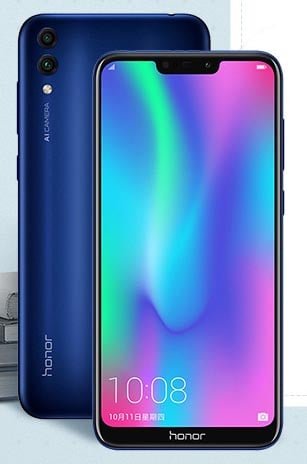 Honor 8C sports a massive 6.25-inch display with the notorious notch above it. It has a 19:9 aspect ratio which justifies the edge-to-edge display. It offers two options of memory and storage, which is 4/32 GB and 4/64 GB combo.  The new Honor mid-ranger comes with dual rear camera of 13MP+ 2MP and an 8-megapixel selfie shooter. Big batteries have now become a common occurrence in the Chinese smartphone market. Honor 8C comes with 4000mAh battery. Out-of-the-box it will run Android 8.1 Oreo.

Currently, the buyers who are interested in the Honor 8C can now pre-order which will cost them $14. Though as of now there is no info on its price tag, we expect Honor 8C may cost between $150-$200.This mid-range machine from Honor will unveil on 11th of October. Earlier in September, the event poster and invite were rolled out.