Releasing special edition smartphones are now becoming very common for any OEM. It is more becoming a clockwork. We see some upper mid-range or flagship device marks its entry. Soon a special edition phone follows it up. Upcoming Honor Play from Huawei is no exception to this. The gaming smartphone will also land in a special avatar with a sleek design on the back with laser engravings. The Honor Play Special Edition will go on sale from 1st of August in China. 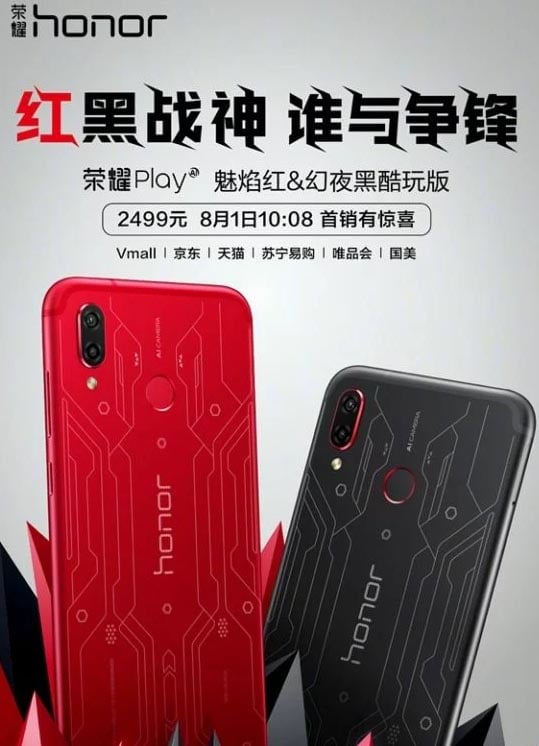 Apart from the laser engraved back body design, there is no other difference between the regular Honor Play and the special variant. The Honor Play Special Edition will sell in two color variants, Enchanting Red and Magic Night Black.

Let’s recapitulate the features the gaming phone Honor Play. It will pack together Kirin 970 chipset, 6 GB RAM, and an expandable 64GB device storage. The highlight of the device will be GPU Turbo technology that provides a seamless gaming experience. Along with this, Honor Play will boast a 6.3-inch LCD display with 1080 x 2340 pixel resolution and a notch. The rear side will house the fingerprint sensor and the dual camera setup. Users will have a 16 MP primary lens and a 2 MP secondary lens for depth sensing. Also, there is a 16 MP selfie shooter. Honor Play will get its power from a 3,750 mAh battery. The phone will run Android 8.1 Oreo with official skin EMUI 8.1.

The price tag is, of course, more than its regular counterpart. In China, the price of Honor Play Special Edition is CNY 2,499 which converts to $366. The regular version costs CNY 2000($291). So, if you want to flaunt the cool design, you have to spend a bit more, however, specs will remain the same on both phones.

So, gamers, get ready to take your gaming to a new level with the Honor Play Special edition. Also, do let us know, which one you will opt for, the regular one or the special variant.