The Chinese smartphone manufacturer Xiaomi had launched Xiaomi Mi A1 with Android One Platform which runs on Stock Android out-of-the-box. The handset became so popular for its specifications, camera performance, and Stock Android UI at a very budget price tag. But that time the phone didn’t come with Project Treble support preloaded. Here in this article, we will share with you the proper step-by-step detailed guide on How to convert Xiaomi Mi A1 From Stock to Treble [Treblelize Mi A1].

Thanks to the XDA Senior member CosmicDan who has put a lot of his work on XDA along with this instruction to convert Xiaomi Mi A1 from Stock to Treble. The support for Treble was included in the Android Oreo 8.0 update, but Mi A1 didn’t get the support with that update. The Mi A1 users can get Android updates and GSI ports quite faster in Project Treble. Google’s Project Treble features a huge improvement in architecture for the OS framework to help out the smartphone manufacturers push their timely Android updates to devices easily.

Now, you may ask about Treble and why it’s so important for future Android devices as well. We have provided all the necessary guides in brief so that you can understand the process. Let’s get started……

Treble is the short term of a new Android architecture model of splitting the system into two new partitions: System and Vendor.

Before Treble architecture, both the Android OS and device-specific files would live together on the system. XDA Developers has given the full description of all which we’re going to elaborate.

Advertisements
Treblizing is just the preparation stage – you still need an AIO installation (see AIO below) before you are actually able to use a Treble ROM. 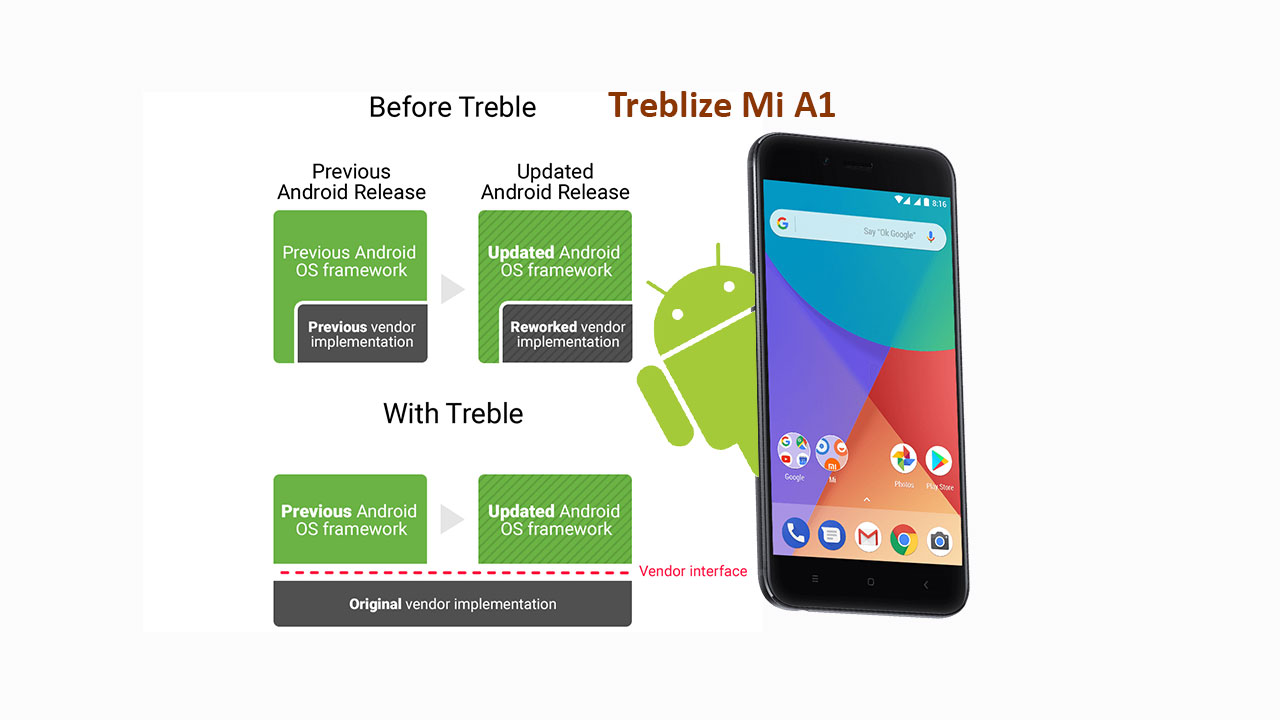 The vendor is also known as Vendor Pack or Vendor Image. In terms of the Treble, this is a stand-alone vendor image (.zip or .img) that can be flashed to your Treble-enabled device to be compatible with a Treble system. These are similar to a kernel source in the way that they are flashed to its own partition on your device and are compatible with many Treble Systems.

Treble developers for the Xiaomi Mi A1 may release stand-alone ‘vendor.img’ file for other ROMs.

GSI stands for ‘Generic System Image’ file. This concept was introduced and developed by @phhusson to create a System image that is device-atheist. It’s a ROM that is designed to work with an existing Treble device, as long as the device has a GSI-compatible Vendor and kernel installation.

For the smartphones with official Treble support, the GSI developer introduced the GSI system for compatibility. Xiaomi Mi A1 didn’t come with in-built Treble support. That’s why XDA Developers (Mi A1 codenamed as Tissot) have taken the responsibility to make a Vendor/Kernel that is GSI-compatible.

AIO stands for All-In-One. This is a Treble firmware that includes a Kernel, System, and a Vendor image in a single ROM zip file. This provides an all-in-one Treble experience through a device-specific Treble ROM. AIO’s are developed to work well with its own ROM but similarly, it would be compatible with a GSI as well.

In order to get a full consistency, we highly recommend everyone to revert to a clean stock ROM. This will ensure the flashing compatibility without any error. If you’re impatient or experienced, feel free to skip this process. But if you have any issues, try again from here.

This will also restore the ROM to the stock partition map, means before ‘Treblizing’.

Taking backup is highly recommended. TWRP Recovery Backup is suitable for these kinds of flashing. It will take all the system, vendor partitions backup easily and stable.

You will need to install an AIO ROM after this part. This is a One-Time-Process for getting Treble capability on your device.

Any failure to this will occur a bootloop.

After following these steps, you should be able to flash Treble ROMs similar as you flash a normal ROM via TWRP.

At the time of sharing this guide, the only Treble AIO is the RR Experimental build. If any other latest build comes, you can install it like normal ROMs. Let’s head over to the process:

You may remember from earlier that the Treble GSI is just System image that uses your existing Vendor and Kernel. We already have installed a Treble kernel and Vendor from an AIO (Section 3 or Section 4.1. above), so it’s quite simple:

Since this is only a System image, there is no need to re-install TWRP Recovery.

While you’re on a current and working AIO or GSI slot, you can flash a vendor.img to update the driver/device level stuff for that ROM. This could be done to e.g. fix the Camera. This is useful if you’re running a GSI.

This is only a System image, there is no need to re-install TWRP Recovery or install any Mods like GApps, Magisk, etc. Unless it’s a Vendor mod (at the time of writing, no Vendor mods exist yet).

This is simple, same as you’re used to before Treblizing. But do note that this is only possible if you chose to resize User data when repartitioning with Treble Manager.

After booting TWRP into the correct slot (Section 3) now, you’re ready to install other ROMs (Section 4) followed by mods.

For more details, Q&A, and forum support, you can check out the original article from here.