Chinese tech giant Huawei had confirmed that they’ll launch Huawei Mate Xs, the improved Mate X. The Mate X was one of it’s kind and it was a mere success. Now with the Mate Xs being cheaper and more powerful, Huawei is set to change the game. Last month, Mate Xs passed 3C certification in China with the model number TAH-AN00m. And now, the device appeared on the database of the Chinese listing site, TENAA, as the launch is nighing. 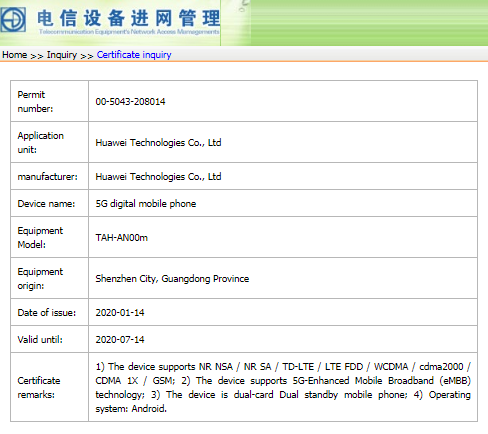 The image exposes that the Mate Xs will be a 5G device and will carry the support for SA and NSA 5G network. There’s not much information available on the image. But we expect the listing to be updated within few days with all the specifications. The device is said to have a 65W fast charging support as per the 3C certification.

It will be a stunning foldable smartphone, if all the speculations we had becomes bona fide. Huawei Mate X was priced at 16,999 Yuan (approx. $2,476), which is a hefty price tag. As the rumors suggest, Mate Xs will be significantly cheaper and will sport a redefined hinge design.

Also, Huawei is reportedly working on another foldable device, which they’re planning to reveal by the second half of this year. That one may sport the same design as the Samsung Galaxy Fold Z and Motorola Razr.

The Huawei Mate Xs will be powered by latest Kirin 990 5G SoC. The device will have a redesigned hinge design and sturdier display. The screen size remains the same, while the overall size will be smaller than Mate X. As a result, Mate Xs might be having slimmer bezels than the Mate X. It will be running on Android without the Google  Services, thanks to US ban.

That’s all we know about the upcoming, redefined Huawei Mate Xs.

Diploma in Computer Engineering aspirant, who's a tech enthusiast and active member in tech communities. He loves to play football,is an amateur artist and a photography fanatic.