The exhilarating open-world action role-playing game from Tripwire Interactive, Maneater, has released last week for Microsoft Windows, PlayStation 4, and Xbox One on 20th May 2020. Allowing you to step into the role of a vengeful female bull shark intent on taking down the shark hunter Scaly Pete, the game invites you to unleash terror along the coastline of Port Clovis in a way that has been described as a “shark version of GTA.” Despite its clearly over-the-top concept, the game is being hailed by the gaming community for its fun entertainment value and beautiful oceanic graphics.

There are certain innovative concepts you need to get familiar with this game. The “Infamy Rank” is an important entity in the game. If you want to progress and actually be talked about in fearful whispers as the terror of the sea, you will have to rise up the Infamy Rank. As an added bonus, doing so will also unlock all the five pieces of the Bio-Electric set. Isn’t that convenient? So here is our guide to help you reach Infamy Rank 10 and obtain the Bio-Electric Set in Maneater! 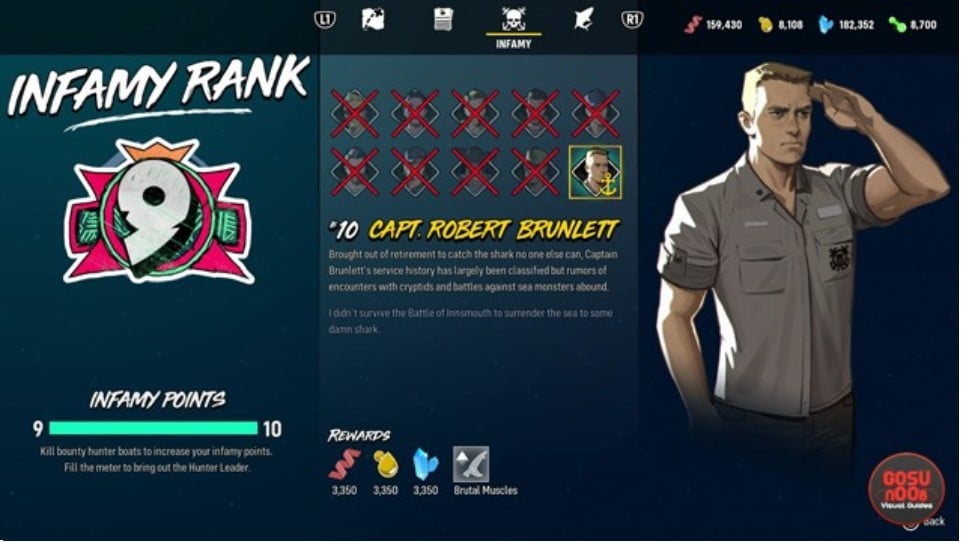 Increasing your Infamy Rank in Maneater

The obvious question is, how does one go up the Infamy Rank in Maneater? Well, the simple answer is by becoming infamous. You have to act out as the shark in Steven Spielberg’s Jaws and chomp down on every human within reach of your toothy maw. Be it innocent bystanders, casual swimmers, or active fishermen, and your Infamy rank will go up once you have killed enough humans in the game. This will also attract the attention of some hardcore shark hunters, so brace yourself for the upcoming fight.

Up Close and Get Personal with Shark Hunters

The hunters will come after you in several groups. Killing the first few waves will hopefully be easy enough, but after that, their groups start growing larger and stronger. We recommend swimming in large circles around the hunters’ boats and deftly moving in and out of range. This will make you a difficult target, and might also give you the chance of ambushing them. If they start targeting you, press “RB” to dodge right out of their reach.

While swimming along the surface of the ocean, you can knife through the water by holding “LT.” Jump out of the water with “B” and then press “RT” to go straight for a hunter and pull them off their boat.  You can repeatedly press “RT” to feast on them and replenish your health if needed. You can also use your victims as projectiles to knock more hunters off their boats and into the ocean. Tightly hold your foes in your mouth by holding the “RT” button down, and then press “LB” to Tailwhip them at another target.

Using this tactic, you can swiftly take care of multiple targets one after the other. Obviously, the more hunters you knockdown into the water, the less there will be actively shooting at you.

How Evolving Your Shark Helps in Rising Up the Infamy Rank?

Your Infamy rank will not decrease, unlike the threat meter. So you can relax and take your time to reach Rank 10. As a matter of fact, you will be unable to obtain Bone Body — one of the most vital evolutions for countering more robust hunters — until the 5th story chapter, and it is better to be prudent and wait until you unlock it before aiming for the higher ranks.

There are two vital evolutions that you should try to secure early and upgrade to their maximum level: Hearty (obtained by defeating Bobbie Bojangles at Infamy Rank 2), and Mineral Digestion at Infamy Rank 3. After reaching the higher Infamy ranks, you must upgrade the Bone set of evolutions if you want to handle the larger hunter boats. The Bone Body and Bone Fin evolutions are especially important.

By using these two, your dodge attack and your Y-button ability, you will be able to inflict some serious damage to the more powerful boats that you will be facing from Infamy Rank 6 and onwards. A good technique is adapting to this technique and simply ignoring the hunters once you’ve upgraded the evolutions high enough. You won’t be too far from reaching Infamy Rank 10 after this point.

Combat situations can go from victory to defeat in the blinking of an eye. Therefore, it is always advisable to have a backup plan in case things start going sideways.

We hope our guide comes in handy to help your reach Infamy Rank 10 and unlock the Bio-Electric set in Maneater. If you liked this guide, go and check out our best iPhone Tips and Tricks, PC tips and tricks, Games and Android Tips, and Tricks. Moreover, you may also subscribe to our very own YouTube Channel and participate in the $150 giveaway contest. However, if you have any queries or feedback, do comment down below with your name and e-mail ID. Happy gaming!