Today the upcoming LG V40 ThinQ Gets NRR Certification in Korea. The NRR certification is awarded by Korean National Radio Research Agency. This certification also confirms the device model number which goes by LM-V409N. We already know some of the primary specifications of the V40 ThinQ from previous reveals. The new V40 ThinQ will be the successor to LG V30 ThinQ. 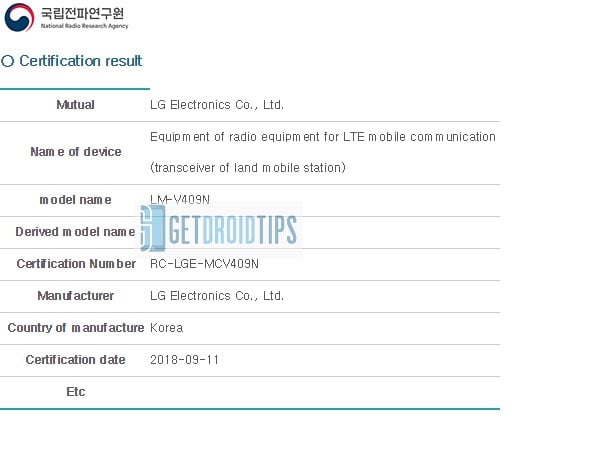 As the LG V40 ThinQ gets NRR certification, it also confirms that the device will bring LTE support (4G network). All the previous reveals have almost given a detailed picture of the upcoming flagship smartphone. LG V40 will pack the flagship grade Snapdragon 845 chipset from Qualcomm. Along with it, there may be a RAM of 6 GB. There will be two variants for internal storage, 64 GB, and 128 GB. It will flaunt a QHD+ P-OLED display of 6.4 inches with 19.5:9 aspect ratio.

The camera section of the LG V40 was revealed a month ago. There will be five-camera set-up with three sensors on the rear and two on the front face. The lens on the back panel will be of 12MP+ 16MP +12MP. The front camera will sport two lenses of 8 MP + 5 MP.

We think that LG V40 will run Android Pie out-of-the-box though there is no confirmation on it.  LG V40 may feature Stereo Speaker Boombox and Quad DAC for a better sonic experience. The device will pack a 3300 mAh battery.

Since the certification has started, we believe his LG V40 ThinQ will unveil in public very soon. Stay tuned with us for more details.