The Infinix S5 Lite smartphone released in November 2019 with Android 9.0 Pie out of the box. Today we will guide you on how to install the Lineage OS 17.1 on the Infinix S5 Lite device by following our guide. 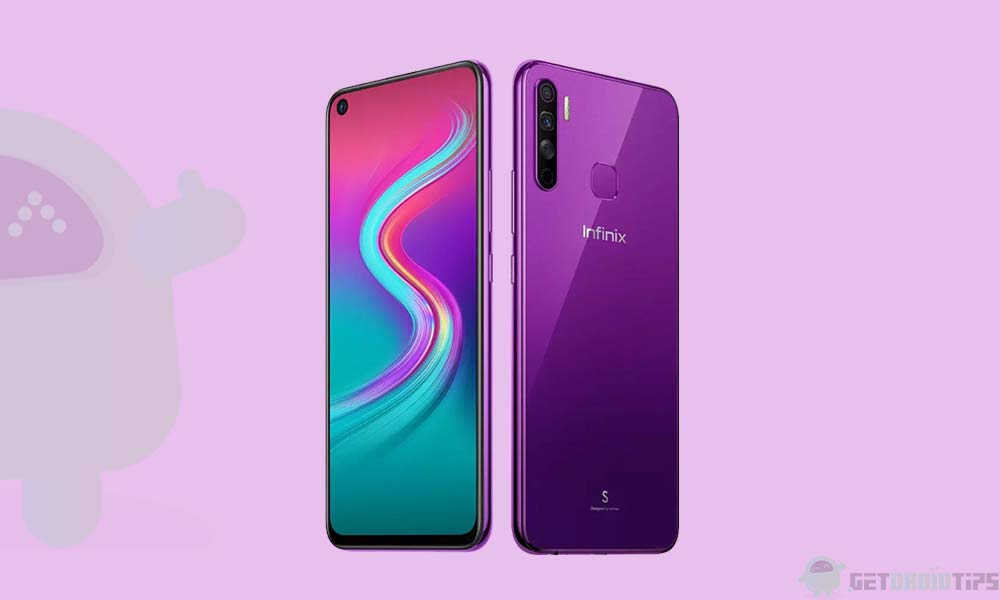 The Infinix S5 Lite sports a 6.6 inch IPS LCD Display with the trendy punch hole and an aspect ratio of 20:9. The display has a pixel density of 266 PPI (Pixel Per Inch) and a resolution of 720 x 1600 pixels ( HD+ screen), a screen to body ratio of 84.4%, and massive 480 nits of brightness. Underneath the Infinix S5 Lite, it sports the tried and tested MediaTek MT6762 chipset, popularly known as MediaTek Helio P22.

This Helio P22 is a 64-bit ARM-based SoC and has an octa-core processor which includes eight Cortex-A53 cores which clock at 2.0 GHz. To the GPU side, it sports the PowerVR GE8320 is clocked at 650 MHz. This chipset pairs with 3GB and 4GGB of RAM. This comes with 32GB and 64GB of eMMC 5.1 onboard storage respectively. Further, this internal storage is expandable via a micro SD card up to 256GB. It has a dedicates SIM card slot where you can insert two Nano-SIM cards and a micro SD card.

Coming to the optics, the Infinix S5 Lite sports a triple camera setup. This dual-camera setup includes a primary 16MP sensor with an aperture value of f/1.8 and PDAF. This primary sensor pairs with a secondary 2MP sensor and finally an AI lens aKa low light sensor. This rear supports for Quad-LED flash and can take HDR photos. To the front, the device has a 16MP sensor with an f/2.0 aperture value. Both the sensors can only shoot videos up to 1080P @ 30fps.

The Infinix S5 Lite packs a 4,100 mAh battery and still charges over a micro USB port. This battery doesn’t support fast charging. It runs on the XOS 5.5 that is based on the Android 9 Pie. This will be soon upgraded to the latest XO6 based on Android 10. Coming to the dimensions, it measures 164 x 76 x 7.9 mm (6.46 x 2.99 x 0.31 in) and weighs about 178 grams. Connectivity options include Wi-Fi 802.11 a/b/g/n, hotspot, Bluetooth 5.0, A2DP, LE, GPS with A-GPS, FM radio, and USB micro USB 2.0, USB On-The-Go. The device has a physical fingerprint scanner and also support for face unlock. Other sensors include accelerometer, proximity, and compass. It is available in three color options namely the Midnight black, Quetzal cyan, and Violet. This made up of plastic to the back and the frame too.

Well, LineageOS 17 will be based on the latest Android 10 and it comes with all the Android 10 features and Lineage customization options which allows users to be more advanced. Now you can enjoy Lineage OS 17.1 on Infinix S5 Lite by flashing this custom ROM.

First, unlock the Infinix S5 Lite bootloader and flash the latest TWRP Recovery. Here we have mentioned all the requirements and download links to flash the Lineage OS 17.1 on Infinix S5 Lite.

We hope that this guide is helpful to you and you have successfully installed the Lineage OS 17.1 on your Infinix S5 Lite handset easily. If in case anything goes wrong or if you have any queries, feel free to ask in the comments below.

You can always revert back to Stock ROM by flashing Stock ROM on Infinix S5 Lite.
Related Articles: