Buying an LED Tv on an E-commerce site is just a matter of clicks and also comes with a lot of paid product suggestions which confuses you while making a perfect decision. Before buying a Best Smart Tv In India, here are some of the major aspects such as Budget, Features, Local services, Warranty & Software updates incase of Android TV that you need to be aware of.

Here are some of the latest features as of November 2020 you need to know before you purchase a best smart tv in India.

Tip: All display devices are not measured from Left – Right or Top – Bottom, Instead they are measured diagonally.

The number of pixels in a display unit from Left to right multiplied by top to bottom is called the resolution of the display device.   The higher the resolution is, the better the picture quality. 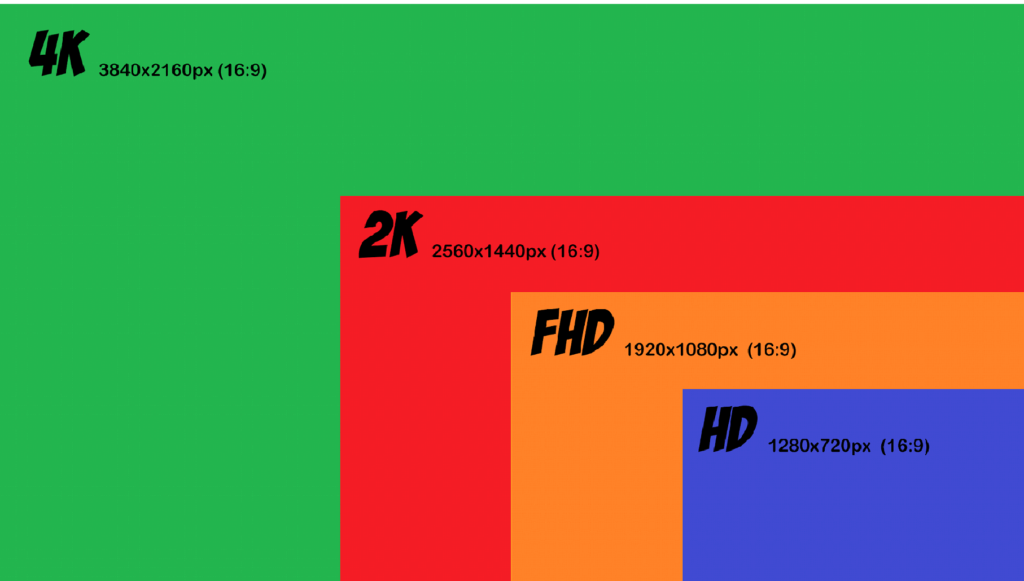 OLED TVs – Organic LED are the latest television display technology with life-like picture quality and have an independent lighting system for every pixel to output the best colors and brightness.

QLED TVs– Quantum LED are one of the trending display technologies with less expensive and can produce up to 80% of picture quality of OLED Tv and do not have an independent backlight system and wide viewing angles. 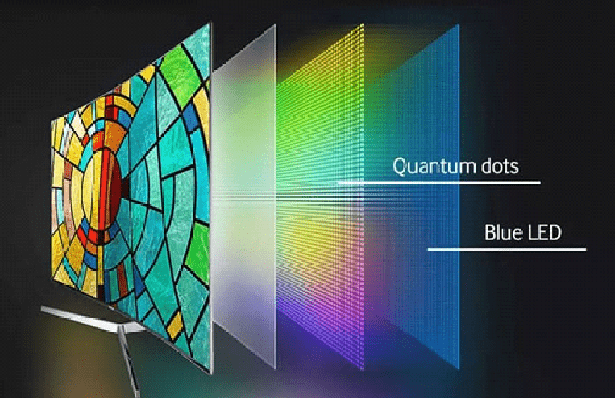 IPS TVs –  In Plane Switching Panel are famous display panels with wide viewing angles and deep colors which are budget friendly television and the depth of black or dark colors are not so high as QLED & OLED.

VA TVs – Vertically aligned panel LED Tv’s are the best smart tv’s only if you have requirement less viewing angles, produces dark colors and has very good color experience, The cost of these panels are very cheap due to low viewing angles. 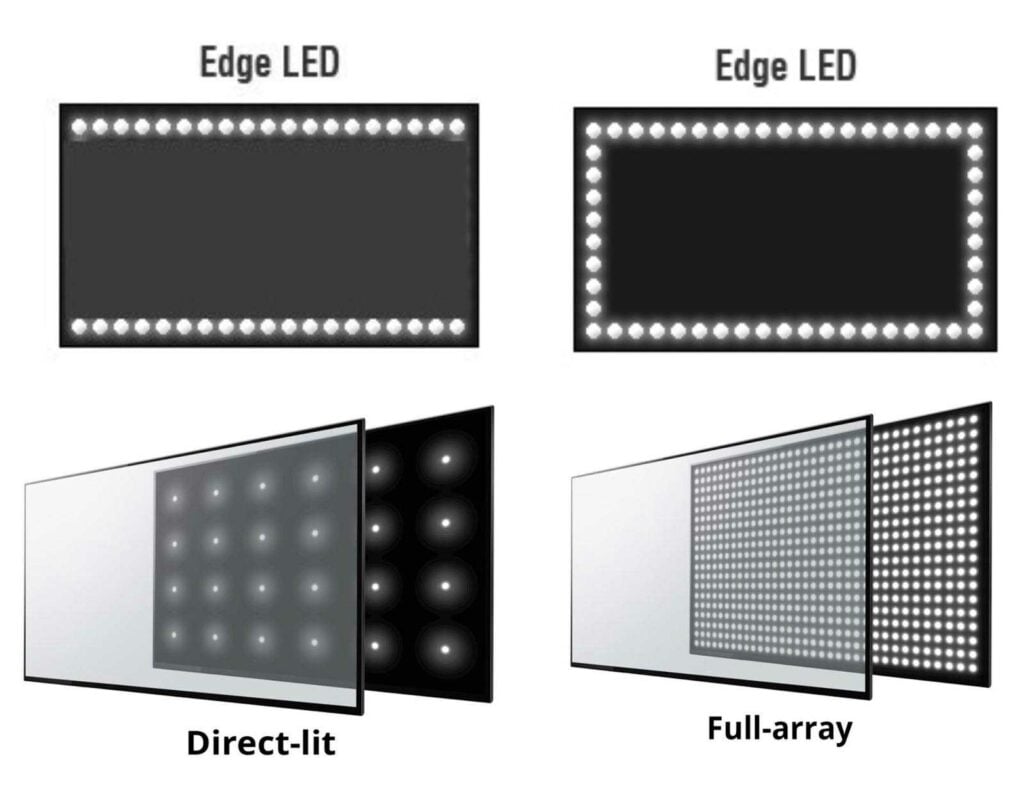 Backlight – Backlights are the lights which illuminate the screen from the back of the LED TV.  The different types of backlights are Full Array, DLED & ELED.

Full Array backlight is considered as best due to its close arrangement and can produce a lot of light.

The second best is DLED where the backlights are placed directly below the display panel, DLED’s also give a very close reach like Fully Array.

ELED are Edge LED lights which produce light from the sides and have a very bad picture experience if the light is not reaching the center of the screen over time of usage. 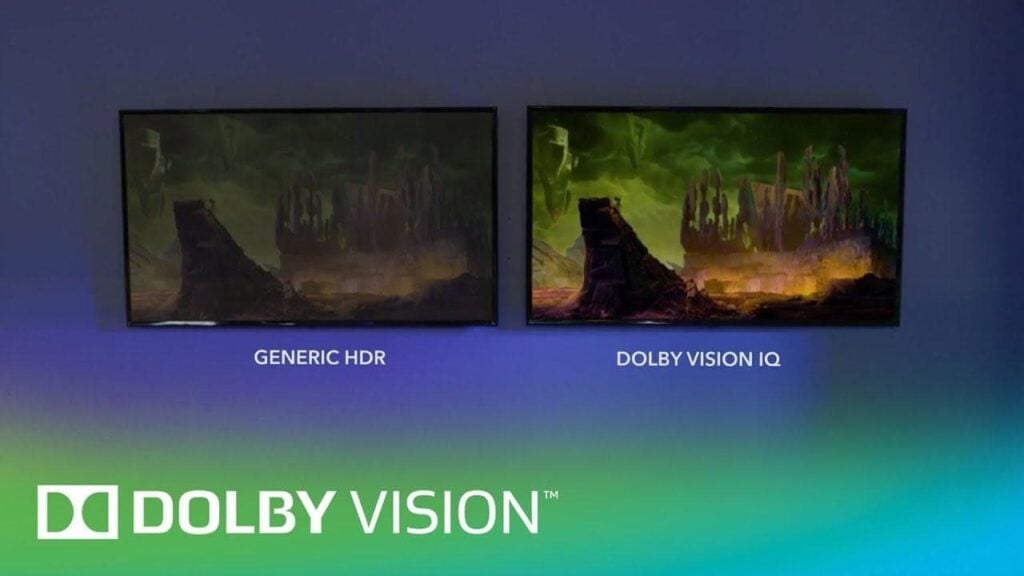 Official Android TV:  These are certified android best led tv in India from google and widely used across major television brands today. Official Android Tv has an equal number of pros and cons.  The pro’s are that these TV’s come with pre-certified Android OS, Netflix and Prime Videos which support upto 4K Resolution.   Whereas the cons are, the number of apps that support Official Android TV’s are very limited and one cannot enjoy a lot of freedom using apps and cannot use trending educational apps such as Google Meet, Zoom etc. 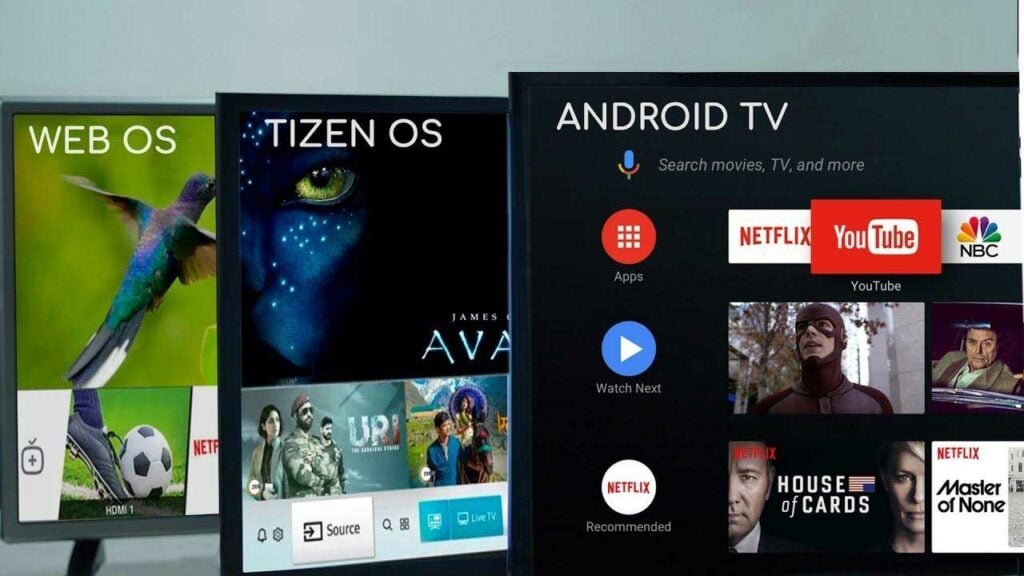 Android AOSP TV:  There are televisions with Android Operating System but are not certified by google directly. The TV Brand has to approach Google & Netflix individually for certification program, post that one can enjoy Netflix & Prime in upto 4K Picture quality.  The number of applications one can use in Android Open Source Project TV are way too high as a mobile phone.

Smart TV:  There are televisions with WebOS and Tizen OS  and are produced only by brands like LG and Samsung. The number of applications available in these TV’s are countable and limited to features.

Processor – Processor is the pillar of an entire Smart Televisions, It has a lot of responsibility than any other component in a LED TV.  The more capable the processor is, the outstanding the Television performance is. Some of the latest processors for televisions are Sony X1 Extreme, LG’s Alpha 9, Panasonic HCX, Ridaex – Amlogic S905X3.

Infact, The processor is connected to ever feature of the Television, Its very crucial to make the best choice for your Smart TVs

RAM & Storage – Random Access Memory & Read Only Memory (Storage) plays a very major role in speed and performance of the television.   The better RAM and the more Storage is always a best choice due to always evolving Android LED TV based applications. 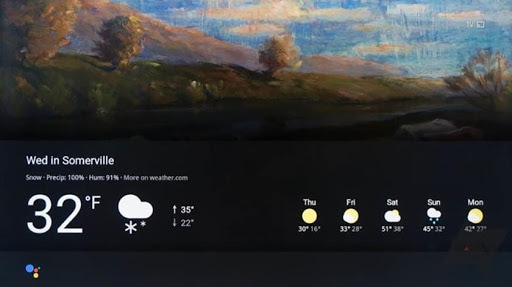 Dual Band Wi-Fi – It is very important that all 4K TVs be equipped with dual band Wi-Fi, The 5 Ghz network in dual band Wi-Fi provides great internet speed to stream all your high resolution content seamlessly without lag.

HDR – This feature takes your Visual Home Entertainment to the next level. 4K HDR content from different sources will give you enhanced and life-like viewing experience. It is very much recommended to choose a TV with HDR 10 and above.

Bluetooth – In a Smart Tv, Bluetooth is mostly used for connecting headphones and other external audio systems.  Consider a recommendation of Bluetooth Version 4.0  and above. 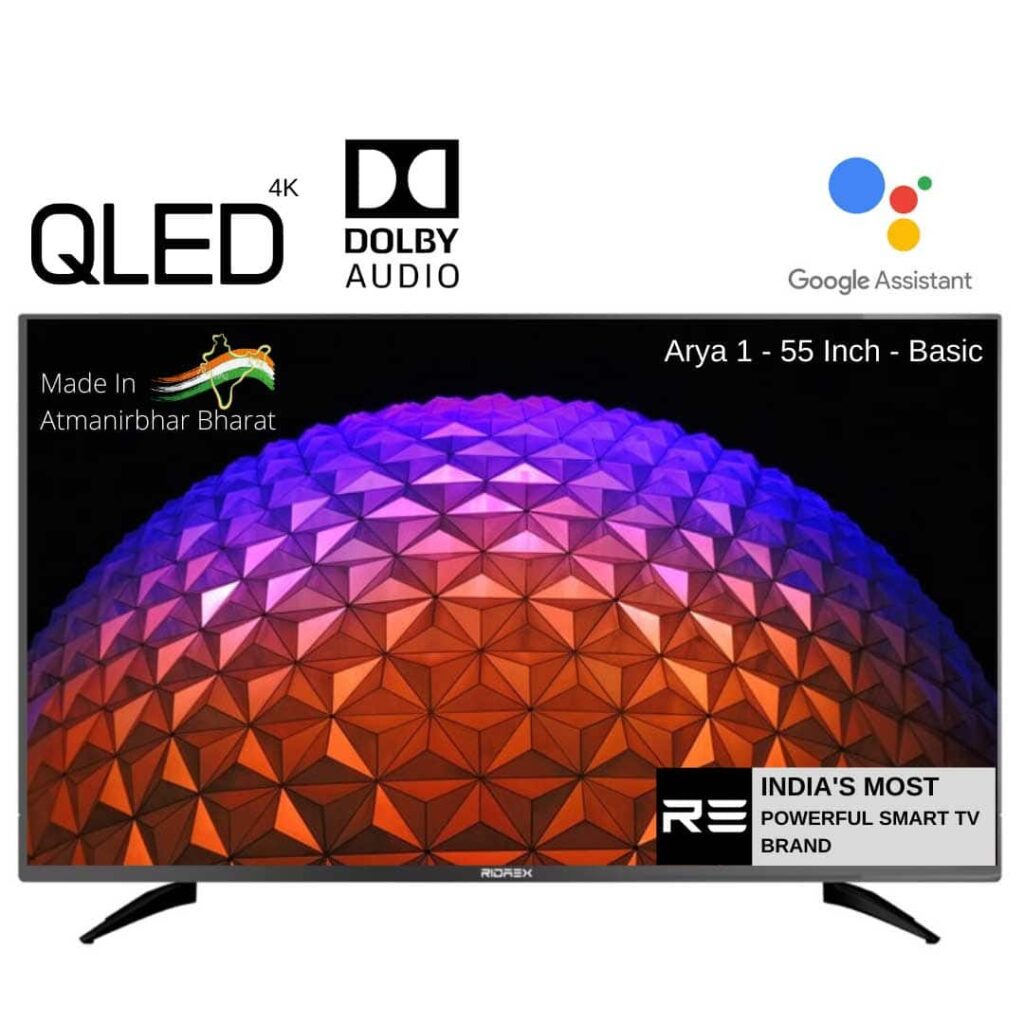 Ridaex proprietary Image Processing Engine “ImageMagick V3 AI with color learning” has proved to outperform any existing premium and pioneers in televisions in the industry.

32 Watt down firing speakers with Dolby Digital and Dolby Atmos, But according to some reviews online, The sound quality is not the best and easily betable by other brands in similar size and budget range. Where picture quality is compared to premium brands like Samsung QLED’s TV’s. 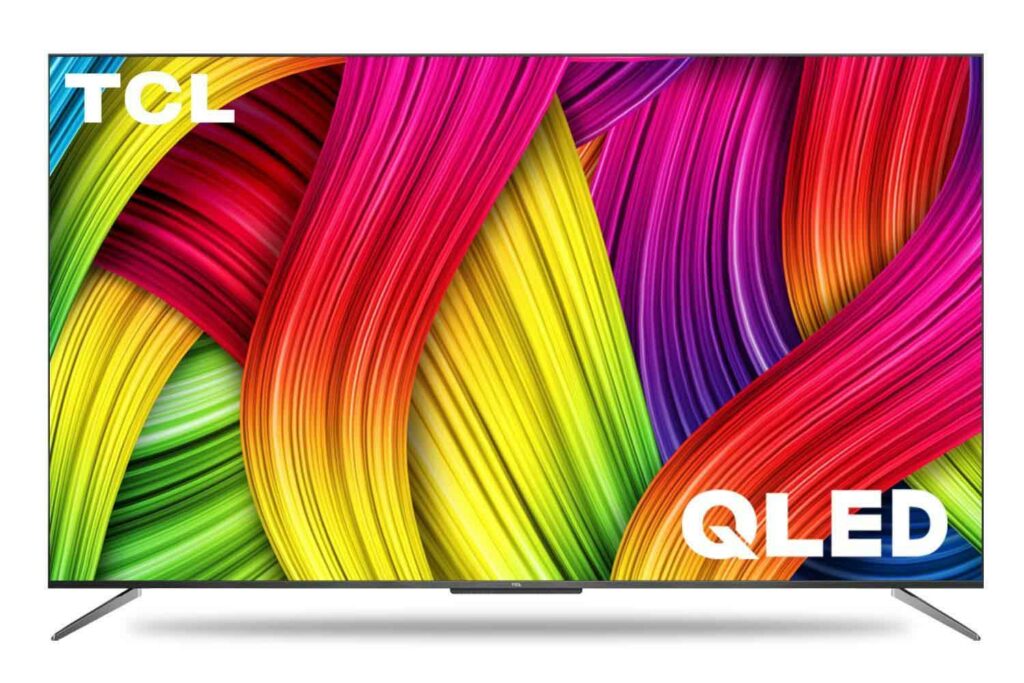 TCL – Telephone Communication Limited a China based company and a pioneer in Television industry computing with brands like Xiaomi & Vu in India. TV 50C715 is the top selling Budget QLED Tv across all major ecommerce site in India.

This is the first series introduced by TCL with a QLED Display panel. Comes with Certified Official Android With Unknown processor. Equipped with 2.5 GB RAM and 16 GB Internal Storage. 4K UHD Display with good viewing angles. Supports over 2000+ android tv applications and limited to mobiles based applications and games. Micro Dimming for most accurate lighting, IPQ Picture Engine, Bezel less and metallic design with 30 watt down firing speakers. 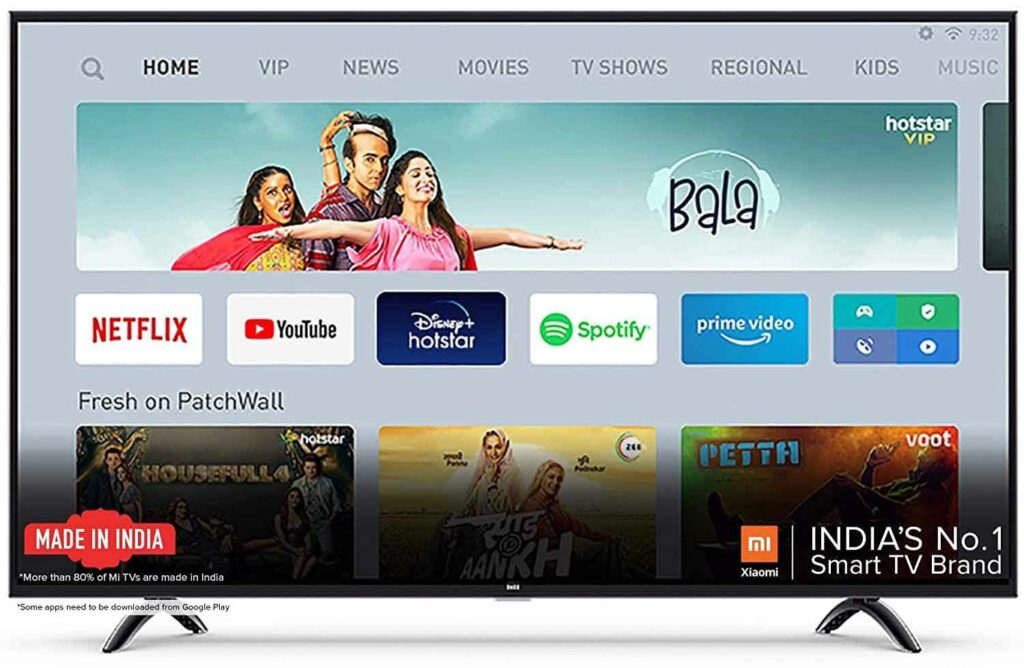 Mi (Xiaomi) the sister concern company of BBK Electronics from China, Mi has named itself “Indian’s No 1 Smart TV Brand” after selling a huge number of Smart TV’s in India in 2018.

Mi Televisions come with Official Android TV operating system and an optional Patchwall UI which makes the television look loaded with content. Though the performance, picture quality and sound are not that great as the previous 2 mentioned televisions. Mi has gained its vast popularity for being a very cheaper cost television in Indian market.

Mi has also launched its recent televisions named “ Mi Horizon Series” where the same television as 4A Pro but comes with the bezel or frame. 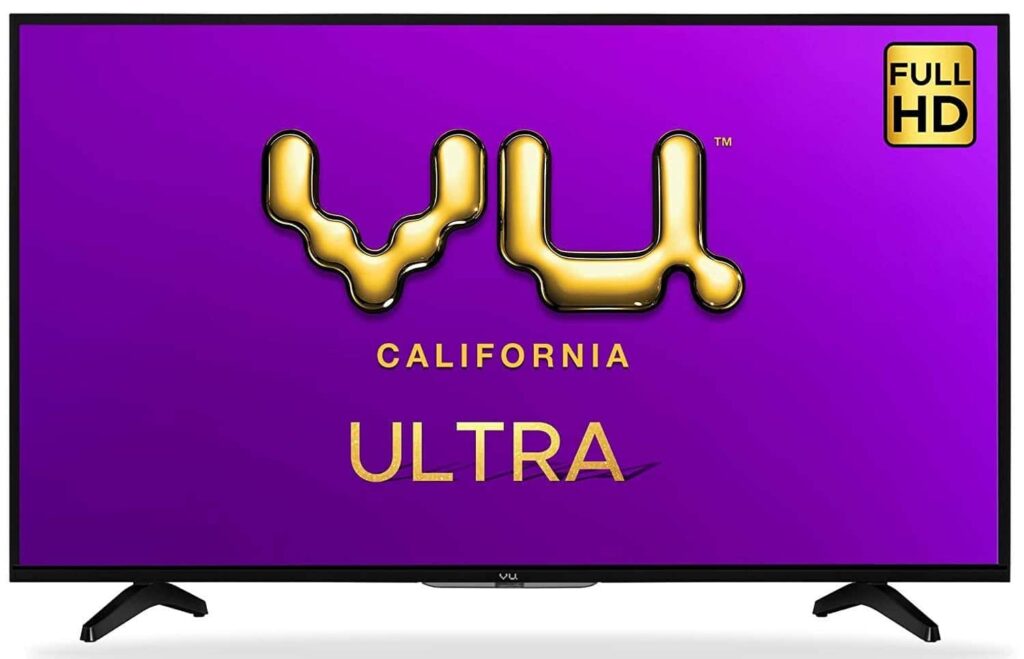 Vu is an Indian based company with brand value from the United States. Vu get its imports television from well known television manufacturer Hisense.

Vu televisions come with IPS Panels and have wide viewing angles with best color enhancements and extremely good services. In other words Vu is the second largest selling brand in India surpassing major brands such as Sony & Samsung. 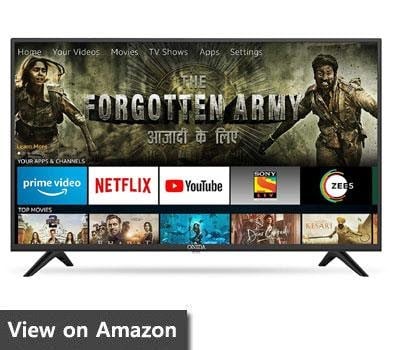 Who doesn’t love Onida Fire TV for its extremely lag free experience, Though its a basic 32 inch television, The software is so well optimized that even while multiple heavier apps open, the Best Smart TV doesn’t lag.

Over 5000+ applications are supported by Amazon Fire TV Os with DRM L1.  But one and only con of this television models are its display resolutions.  While newer brands such as Ridaex & Mi are introducing Full HD Panels. Onida Fire TV panels are still HD Ready.

All the above mentioned Best Smart Tv In Indian suggestions are based on our personal usage experience and relevant technology understanding. The article is not associated with any E-Commerce Affiliate program.  The suggestions are purely based on  Best Budget LED Tv, LED Tv Features,User Interface, Future Scope,  Warranty and best value for money LED Tv’s.