The Grau is a lightweight assault rifle that offers great range and maneuverability. This weapon uses the 5.56 ammo and is a favorite among Call of Duty Warzone players. There are plenty of other ARs available on the game, but the Grau has one of the best thanks to its range. If you’ve taken a liking to the Grau, then you may want to find out how to best loadout the weapon. To make things easier for you, we’ve listed three best loadouts for Grau in Call of Duty Warzone. Let’s take a look. 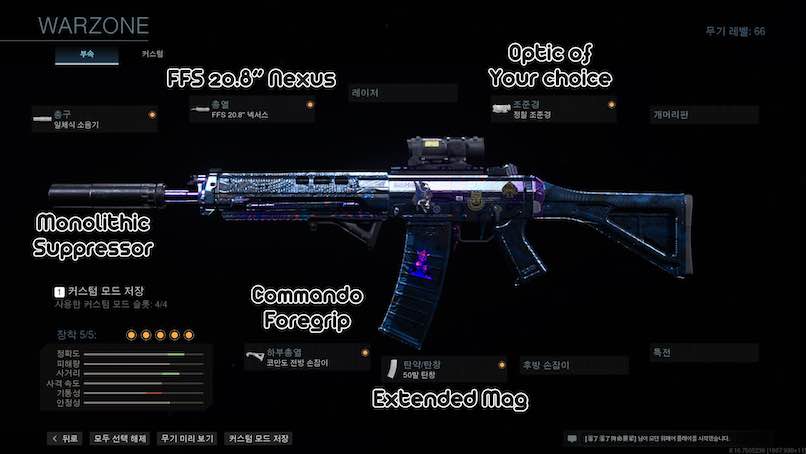 The first loadout option for the Grau will improve the weapons range by 47.5 percent, and aid in sound suppression. It will also enhance the recoil control, recoil stabilization, and aim stabilization. However, it does add about +3 frames for Aim Down Sight and reduces movement speed by up to 6 percent.

If you would like the Grau to be a relatively silent killer, then the Monolithic Suppressor is a good choice. It offers great sound suppression and improves the range by 7.5 percent. The Aim Down Sight is affected by the +1 frame due to the muzzle adding some weight.

The FFS 20.8″ Nexus is a stainless steel barrel that offers faster bullet velocity while increasing the range by 40 percent. It also enhances the recoil control, but the extra weight reduces movement speed by 3 percent and Aim Down Sight by +2 frames. 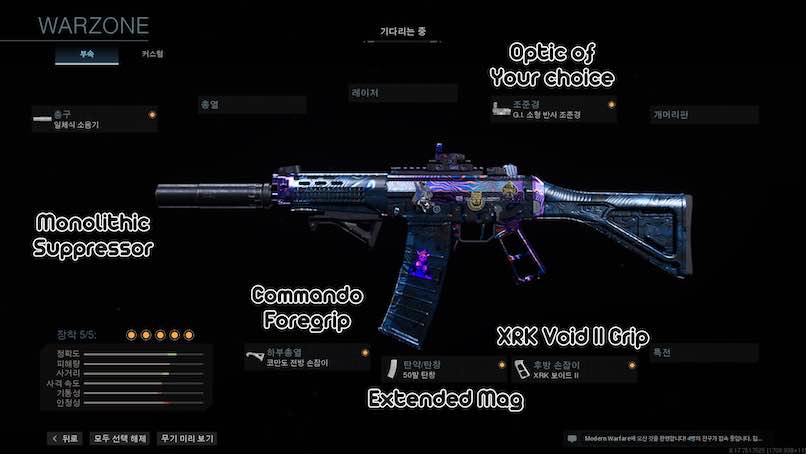 This loadout option offers an improved range of 7.5 percent with enhanced recoil stabilization and Sprint Out time. It also gets sound suppression thanks to a suppressor. If you like the Grau for its low recoil, good range, and overall balance, then you’ll prefer this option. However, it does affect the recoil control and reduces movement speed by up to 3 percent.

The Monolithic Suppressor helps in good sound suppression and increases the range by 7.5 percent. The Aim Down Sight is affected by the +1 frame, but that will not decrease agility by a lot.

This loadout features a rear grip called the XRK Void II, which is a skeletonized grip. This offers enhanced Sprint out time, which is useful when performing high-speed maneuvers. However, it does negatively affect the Aim stabilization and recoil control, while also adding +1 frame to Aim Down Sight.

The heavily weighted underbarrel helps improve the recoil stabilization due to the weight. It also enhances the aim stabilization and is easier to control under continuous fire. Unfortunately, the extra weight slightly affects the movement speed. 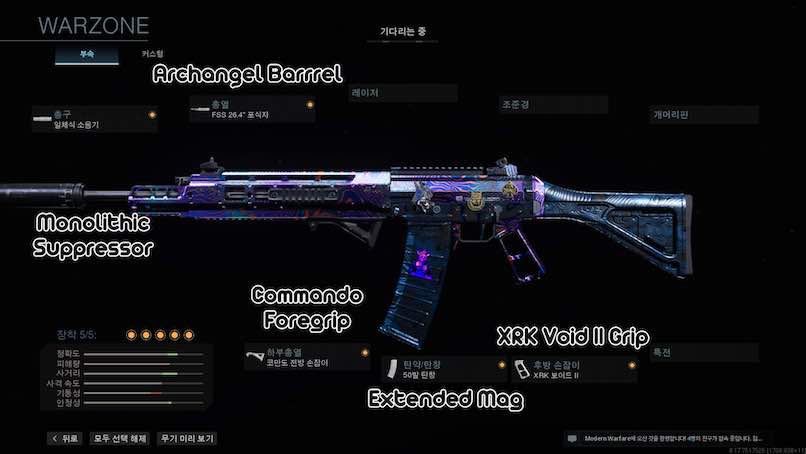 The third loadout option will significantly increase the range by 52.5 percent as well as improve bullet velocity. This build also helps in sound suppression and enhances recoil stabilization. However, the Aim Down Sight is affected by up to +5 frames, and players will notice a decrease of up to 6.5 percent in movement speed.

The Monolithic Suppressor adds superior sound suppression and increases the range of the weapon by 7.5 percent. It also adds +1 frames of Aim Down Sight.

This is a partially shrouded 26.4″ FSS Barrel that is the best in terms of both ranges as well as accuracy. If you’re going to sniping a lot or do a lot of long-range combat, then this is a great choice. It improves the range by 45 percent and offers enhanced recoil control. However, the movement speed is reduced by 3.5 percent, whereas the Aim Down Sight is affected by +4 frames.

The Commando Foregrip adds more weight to the build and improves things such as recoil stabilization and aim stabilization. It is easier to control under continuous fire. However, the movement speed is reduced by 1 percent due to the heavyweight.

The skeletonized rear grip helps in improving the Sprint out time but affects aim stabilization and recoil control. It also adds +1 Frame to Aim Down Sight.

Just like the other two builds here, you can complete the loadout with extended magazines. While they affect the movement speed, both the 50 Rounds and 60 Rounds Mags are great for continuous combat and helps take down a larger group of enemies.

There you are. Those were the best loadout for Grau in Call of Duty Warzone. As you can see, these load-outs are different in several ways but offer great range and damage. Let us know which one of these is your favorite. If you’ve got something to add, please use the comments section.