Moto G4 users are now started reportedly receiving Android 7.0 Nougat firmware update. Today Moto has started seeding new update of Android Nougat for the 4th Generation of Moto G. The update started to rollout in US which bumps the software version to NPJ25.93-14. This is a major upgrade for Moto G4 users which brings all Android Nougat features. This update is rolling out for Moto G4 US variant with model XT1625. As we have seen more Moto devices started receiving Android Nougat update lately, including Moto G4 Plus. if you have a Moto G4 XT1625 variants, then you can enjoy the latest Nougat update on your phone. 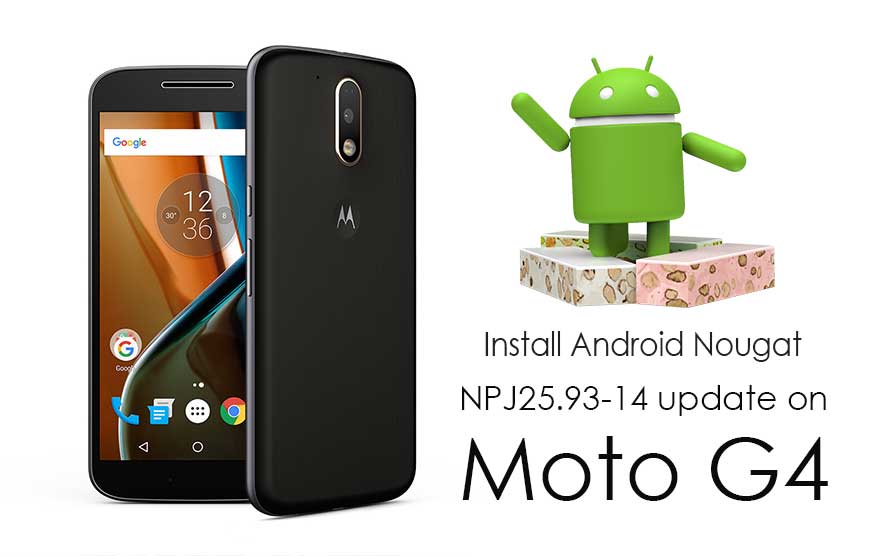 The update comes officially from Motorola to Moto G4 in the form of OTA (over the air) which is rolling out via phase wise manner. If you still have not received the update then head to the below guide on How to update Android Nougat for Moto G4 US XT1625 variants. This update will upgrade your phone to the latest Android Nougat on Moto G4 XT1625. The new sweetness of Android Nougat comes with a lot of features such Multi Tasking Split Screen Window, Quick Reply via Notification, Notification Redesigned panel, Notifications prioritization, Enhanced Doze Mode, System UI Tuner, Customizable Quick Settings, Don Not Disturb, New Settings Panel Redesigned, Data Saver per App, seamless updates, New Emoji Support etc.

To Install Android Nougat on Moto G4 US XT1625, you must be running Stock Marshmallow Firmware without any root. So look for the latest OTA Update with NPJ25.93-14 for Moto G4 US XT1625 on your update screen. First of all make sure your device needs to be connected to a WiFi network and second, your device’s battery needs to be fully charged

If you still waiting for this update NPJ25.93-14 for Moto G4 , Go to Settings –> About Phone–> System updates to see if you have Over-The-Air update. If your phone has received the latest OTA update, then tap YES, I’M IN and select Wi-Fi or Mobile network to download. Once the download is done, tap on INSTALL button to start updating your Moto G4 with NPJ25.93-14.

If you have not received any update, then you can download the OTA update from our below download link. You can manually update the Full Nougat update instead of waiting for OTA to hit your phone. To update manually with NPJ25.93-14 on Moto G4 US XT1625 can take only 8-10 minutes approximately. Read the steps below on How to Update the latest OTA updates on Moto G4 US XT1625 manually.

Install Moto G4 US XT1625 to Android Nougat using the below guide.

Let us know your feedback on January Security via update NPJ25.93-14 Android Nougat for Moto G4 in the comment section below.