While some devices like OnePlus 8 series, Vivo iQOO 3 4G/5G, Oppo Reno X2 series, and Pixel series are busy jumping to the Android 11 bandwagon, others are still in line to get the taste of the Android 10. In this regard is one of the more popular offerings from Motorola. The Motorola Moto G7 Verizon and T-Mobile have just welcomed the Android 10 build, with the version number QPU30.52-23.

The device already packs in some impressive features. On the display front, the 6.2 inches screen has a 1080 x 2270 pixel resolution. Under the hood, you get an octa-core Qualcomm SDM632 Snapdragon 632 chipset and an Adreno 506 as the GPU. The device is launched with Android 9.0 Pie out of the box and comes in 64GB 4GB RAM combination.

The 12+5MP dual rear camera setup manages to take some good looking pics and is further complemented by a single front 8MP camera. It has also managed to retain the 3.5mm headphone jack. Furthermore, it holds fingerprint (rear-mounted), accelerometer, gyro, proximity, compass sensors. To support these features, you get a 3000mAh battery that has a 15W fast charging capability as well.

All these features are equally impressive in its own rights and the fact that it has received the newest Android update should bring in even more reasons to rejoice. The Verizon and T-Mobile Motorola Moto G7 have just been blessed with the Android 10 update. With the version number QPU30.52-23, the update brings in the security patch for the month of April 2020. 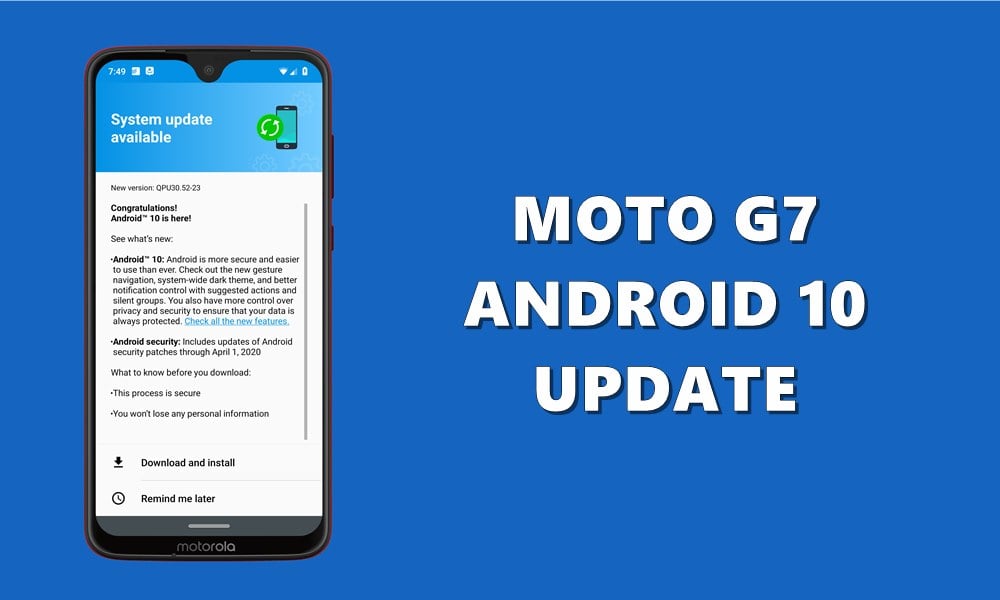 With the Android 10 update, there are quite a few goodies that the device owners will be welcoming. Here are some of the noteworthy features with the said Android build.

Taking a clue out of Apple’s book, Google introduced new full-screen gesture navigation. You could now perform the back action by just swiping across the left or right side of your screen, launch Google Assistant by swiping from the bottom left and right corners, etc. Furthermore, you could now swipe up from the bottom of the screen to go to the home screen or swipe up and hold to access the Recent menu.

This was perhaps one of the most requested features, and Google finally decided to pay head. Beginning with Android 10, you now get a system-wide dark mode. Well, that’s not all. From the Developer Options, you could turn on the overriding force dark mode feature that forces all the apps to enable the dark mode, even if they don’t officially support it.

Up until now, you only had the option to allow for permission or deny. However beginning with Android 10, there’s a new addition: Allow only while using the app. With this, what happens is that the app will only be able to access the said permission till its running in the foreground, once you minimize it, the app would no longer be able to make use of these permissions. You will again have to permit it the next time you use the app. As of now, this feature is limited to Location permission, with a chance for further expansions in Android 11.

With Digital Wellbeing now baked into the Android system, there’s a plentitude of benefits to make full use of. For example, you could set usage timer for each of the apps, or you could also make use of some parental controls added to this Wellbeing menu. Likewise, Focus Mode is another handy addition to it.

The Live Captions automatically adds a caption to any video in real-time, even if the video doesn’t have captions. This is a useful feature, for a lot of people out there.

To be fair, this is just the tip of the iceberg. There are plenty of others such impressive features that the Android 10 update brings in with itself. You could get a taste of all these features by downloading the firmware package from the below section.

Quite a few users have already received the said Android upgrade on their G7 device. As is evident from the below screenshot, the good news is in order.

Users are receiving the update in batches and should reach the entire userbase within a few days. However, if you cannot wait, then not an issue. You could directly download and install the latest Android 10 update onto your Moto G7 device. As mentioned before, the firmware version of the update stands at QPU30.52-23. Furthermore, it brings in the security patch for the month of April 2020.

So this was all from this news about the Moto G7 welcoming the table Android 10 update. Do let us know what do you think of the same in the comment section below. Furthermore, we would also advise you to create a backup before beginning with the update. Although it is an official update, yet it is always advisable to be on a safer side beforehand. Once the update is successful, don’t forget to check out our iPhone Tips and Tricks, PC tips and tricks, and Android Tips and Trick section as well.