Motorola Moto X4 in Brazil is getting the monthly Android security patch for June 2018. The Moto X4 June 2018 security patch update is moving over the air. This upgrade doesn’t bring anything except regular bug fixing and improving system stability. The device still sticks to the Android 8.0 Oreo. Current software update bumps the build number OPWS27.2.3 to the device. 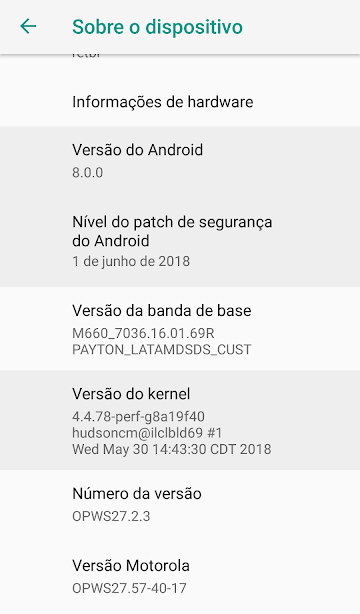 If you want more details about the security threats that this update plugs then you can refer to Android Security Bulletin for June 2018.

Moto X4 is a dual SIM smartphone that was launched in November 2017. The phone flaunts a 5.20-inch touchscreen display with a resolution of 1080 pixels by 1920 pixels. Moto X4 runs on Quad-core 2.2 GHz Qualcomm SDM630 Snapdragon 630 processor. It comes with a 4 GB of RAM. The device packs 64 GB of expandable internal storage. In the camera section, the Moto X4 brings a 12-megapixel primary camera on the rear and a 16-megapixel front face shooter. This device runs Android 7.1.1 Nougat out-of-the-box.

The OPWS27.2.3 software for Moto X4 is moving as an airborne update. You may wait for the notification from your device as it will automatically capture the update when it rolls in.

If the OTA delays in showing up, you can also manually search for it. To do that, simply go to device Settings > About phone > Software updates > Check for Updates. If the latest software update with build OPWS27.2.3 is available then download it. Then follow the on-screen instructions you see to install it. We suggest that you find and connect to a good Wi-Fi network to download this software OTA update. Also, make sure to have a full battery charge on your phone. A low battery will not let you install the software update properly.

Since other variants of Moto X4 are getting Android 8.1 Oreo, so we can hope the same to knock into all remaining variants. Nevertheless, the device is getting the latest security patch. So make sure not to miss this one. Catch and install the Moto X4 June 2018 security patch update as it rolls in.