Latest Update: After so many leaks, rumors, and teasers finally, Motorola Moto Z4 is now official in the USA region. The unlocked Moto Z4 version costs at $499 while the Verizon users can get it for $240 on a contract basis. The device also supports 5G connectivity via the 5G Moto Mod which costs additionally $199. You will get 360-degree Moto Camera Mod out-of-the-box.

Though the Motorola Moto Z4 is yet to release officially by the brand, it’s already appeared on the Amazon listing with the price and full specification details. We have shared a screenshot of the page listed on Amazon website below. As stated by Android Authority, There are two listings of the same device with a standard edition and Moto Mod variant. The Moto Z4 comes with Amazon Alexa Assitant preloaded at $499.99 while the unlocked 360-degree camera (Moto Mod) variants also priced at $499.99 onwards.

The back panel of the smartphone has a pogo-pin connector for Moto Mod accessories. It’s worth mentioning that the older Moto Mods are compatible with Moto Z4 as well. Meanwhile, there is no information about the 5G Moto Mod connector on Amazon. That means Moto Z4 won’t be the first Motorola 5G capable smartphone for now.

The Lenovo-owned Motorola brand has two most popular smartphone segment or series – Moto G and Moto Z series. The Moto G series is known for all the budget-centric smartphones where you can expect a Stock Android device at a competitive price tag with decent specs. While the Moto Z series showcase the flagship lineup with great design, build quality, powerful hardware, and good camera features. The company is now going to release its another flagship device called Moto Z4 and  Moto Z4 Play (most probably).

Motorola has not planned only a single foldable Razr: Moto Z4

There are plenty of leaks and rumors gathering around about the Moto Z4 and its specifications. Meanwhile, the leaked Moto Z4 images are looking great on paper with Moto Mods as well. This is one of the Motorola signature external mods which you can use with only Z series devices.

Here in this article, we’ll share with you some of the Moto Z4 details, expected specifications along with images.

Back in November 2018, Motorola Moto Z4 specifications surfaced online with premium flagship processor from Qualcomm and higher memory options. It would be Moto’s first ever smartphone which will come with an in-display fingerprint scanner.

Must Read: Moto Z4 Specs Leaked! Will Come With Snapdragon 675 And 48 MP Camera 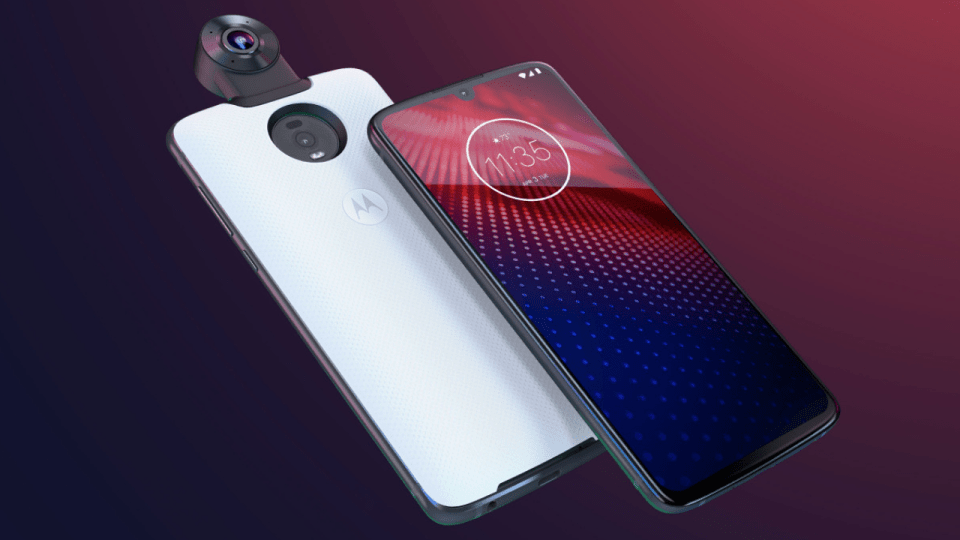 However, it’s being called a flagship device but without having the Snapdragon 855 SoC, it’s powered by SDM675 chipset. That means the GPU will also be lower. The RAM and storage options are also not that great. In 2019, a flagship device should come with the highest 8GB/10GB of RAM with 256/512GB of onboard storage. But here it’s not the case.

According to the 91Mobiles, Motorola will also introduce the Night Vision mode which will be similar to Google’s Night Sight mode. The 25MP selfie camera can also take group selfies with wide-angle mode. Meanwhile, the AR Stickers would also available with the stock camera application. There is no IP certification mentioned yet by the company. But as we all know, Motorola delivers water repellent coating at least to resist splashes.

In the year 2019, when every smartphone brands are removing the 3.5mm audio jack from their flagship devices, Motorola is one of them who wants to keep headphone jacks alive. In this list, Nokia, Lenovo, Samsung, Xioami, Oppo, Vivo brands are also included who have kept audio jacks to some of its devices or series.

The Motorola Z4 will not only take back the 3.5mm audio jack but also provides USB Type-C port with fast charging support.

It’s quite awkward and pathetic too that Motorola has decided to go with a single rear camera setup with its flagship device in 2019. However, the typical Moto Z series design is quite bulky with the same old rounded camera bump. Google was the only brand who offers a decent single camera at the back with most powerful camera software. We all know about the Google Camera and images from Pixel devices are just killer.

As per the leaked images by a popular leakstar @evleaks has mentioned that the device will get a single-lens rear camera but it will be a massive 48MP. The lens will use Quad Pixel technology to combine 4 pixels into 1 pixel that delivers a 12MP image with a sharp quality even in a lowlight. Whereas, the 25MP selfie camera will also come with Quad Pixel technology to improve on low-light photography with built-in AI support. 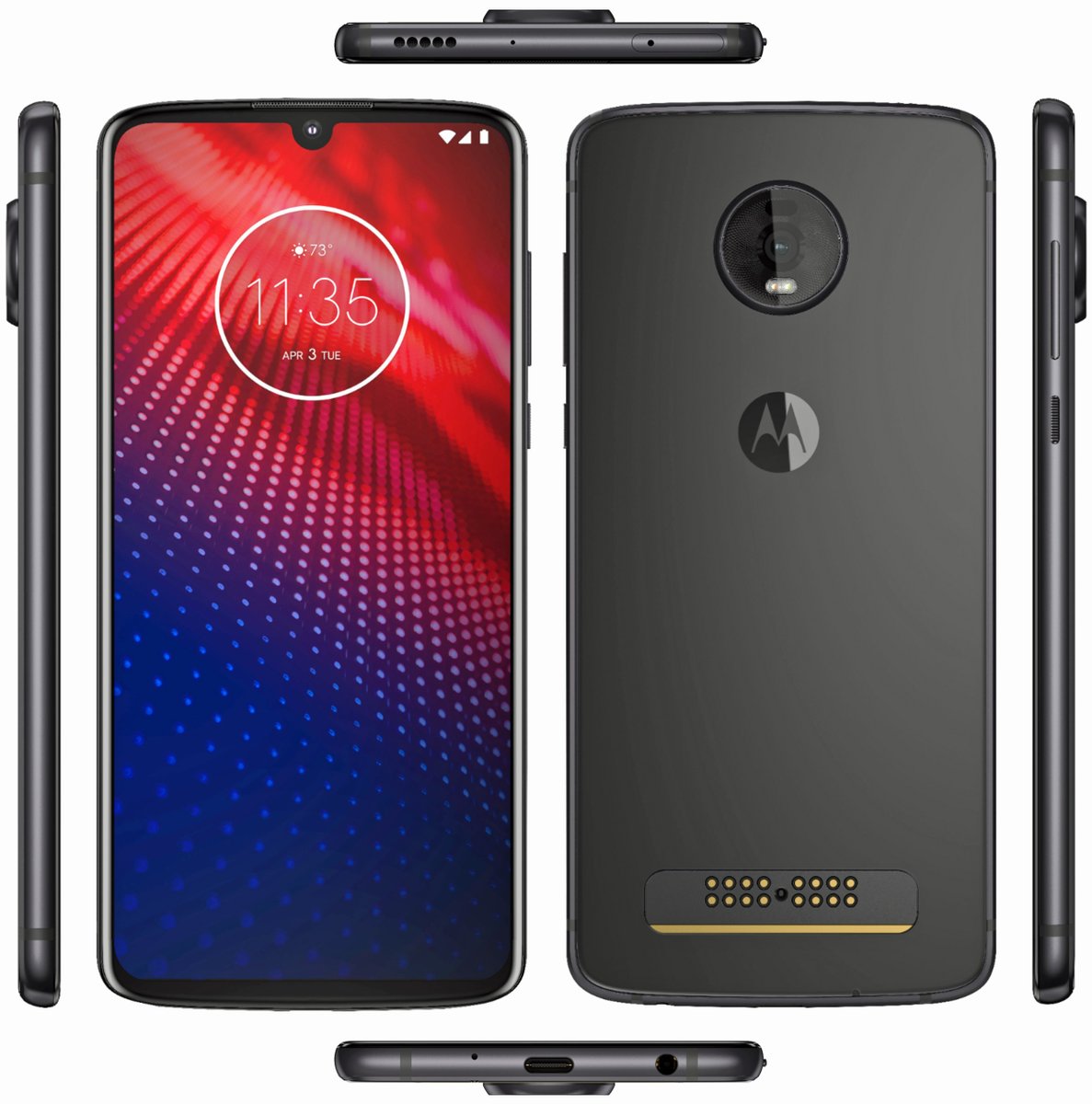 Obviously, the Moto Z4 will come with Android 9 Pie stock Android out-of-the-box. The Android 9 Pie is one of the best Android OS versions for now with system stability, user interface, and some of the design changes. The Pie also brings Digital Wellbeing, App Timer, App Slices, Recent UI, Notification Panels, Lock Screen, Volume Slider, etc. Whereas, the Google Lens, Google Assistant will also be available with this device. Motorola will also include support for Moto Display, Moto Actions, and Moto Experiences.

Motorola is still interested in modular extension with the Moto Z4 and the Moto Z3 can also support 5G with the help of the 5G Moto Mod. Verizon is expected to officially begin its 5G connectivity in mid-May 2019 with the release of the Galaxy S10 5G by Samsung. The network carrier is also the exclusive seller of the Moto Z3 in the USA.

Now, the most important part is that when will Moto Z4 release and what will be the cost…… Motorola hasn’t revealed any pricing and availability details for the Moto Z4, but we can expect that it will cost around US 400 Dollars which will cost around INR 27,390 in India.

Motorola released the Moto Z3 and Moto Z2 Force in August. If this is the timeline of Motorola, then we can see the Moto Z4 in August 2019 or earlier.