So the year 2020 will be a return back of Moto back into their flagship series.  According to a tipster, the new device will be named as Motorola Edge+.  A few days before, this report was revealed by a popular tipster i.e.  Evan Blass via his official Twitter account.  And finally, now the device has been entered in the GeekBench listing and as usual, the listing also comes with the key specifications of the device. 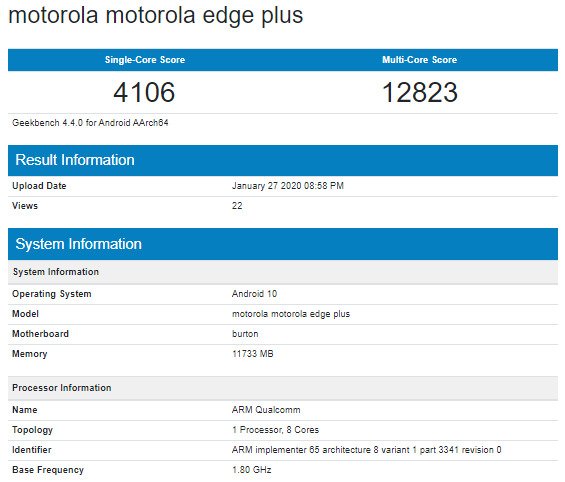 Coming back to the GeekBench listing, the smartphone scores 4106 points in Single-core tests and 12823 in Multi-Core tests. This is pretty impressive for a flagship from a brand like Motorola which least exists in the industry. Talking about the specifications, the device will sport an octa-core Qualcomm chipset which will be clocked at 1.8GHz. However, the listing doesn’t reveal the name of the processor, it only reveals the codename of the processor. The codename of the processor which is mentioned in the listing is “burton”. This is for the first time a device comes with this codename. According to rumors and reports, this will be the latest flagship chipset from Qualcomm i.e. Snapdragon 865 SoC. Since the smartphone sports this SoC it will be 5G capable.

Further, the listing also reveals that the smartphone will run on the latest Android 10 out of the box. The chipset will pair a whopping 12GB of RAM. As usual, the listing doesn’t reveal any other specifications of the device. As far as other specs go, we know that the smartphone will sport the latest trending punch-hole display. But as far placement of the punch-hole goes, there are no reports which confirm where actually the punch-hole sits. Earlier, the brand unveiled its Motorola One Vision, which was the first from the brand to sport a punch-hole display. According to the reports, the upcoming Moto G8 series i.e. Moto G8 and Moto G8 Power will also sport a punch-hole like display.

There are also other reports which suggest that Motorola will launch another smartphone with the punch-hole display. Underneath that device, it is rumored to sport the new Qualcomm Snapdragon 765G which integrates the X52 modem which is 5G capable. Earlier this chipset was used in the Redmi K30 5G and Realme X50 5G.

To recall this 2017 flagship phone sports a 5.5-inch Quad HD OLED display in the aspect ratio of 16:9. It has a screen to body ratio of 70.4% and a resolution of 1440 x 2560 pixels. The device is also splash resistant. Underneath the device, it sports the Qualcomm Snapdragon 835 chipset which we have seen on famous devices like the Pixel 2 XL and OnePlus 5 series.  This chipset pairs with 4 and 6GB of RAM and 64 and 128GB of internal storage. This is further expandable via a micro SD card slot and the device has a dedicated SIM card slot.

The device packs a 2730 mAh battery which supports 15W fast charging tech. Further, the smartphone came with Android 7.1.1 Nougat on board and now the brand has upgraded it to the Android 9 Pie. The device is available in Super Black, Fine Gold, and Lunar Grey color options.