Nokia is always at the forefront when we think about punctual software and system updates. It is that one OEM that has made the v8.1 Oreo rolling into various of its devices.  At the same time, other device makers are yet to roll a stable v8.0 Oreo update for their premium devices. Speaking of which Android 8.1 Oreo is now knocking into Nokia 6.1. If you own the device, then you can download the Nokia 6.1 Android 8.1 Oreo via OTA. 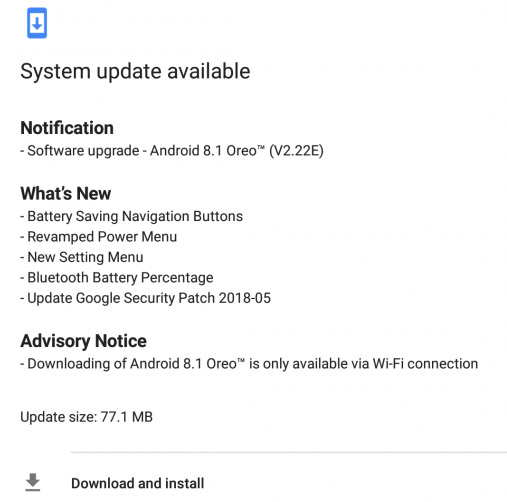 This system update brings the software version v2.22E to the Nokia 6.1. Along with the upgrade, there are lots of other goodies too. It packs a new power and Settings menu, Bluetooth battery percentage. There is an all-new battery saving navigation button. The security patch level of the device is of May 2018 which a month old.

In the meantime, Nokia is also conducting Android P beta testing in China. Devices like Nokia 7Plus, Nokia 6.1 and Nokia 8sirocco are getting the early experience of Android v9.0.

Nokia 6.1 Android 8.1 Oreo update is moving over-the-air(OTA) and weighs 77.1 MB. It will be reaching the devices in batches. Not all devices will receive the software update at the same time. It will be available in all the regions gradually. Your phone will automatically catch the OTA update. Then you will get the prompt to install it. If the OTA doesn’t show up and you don’t want to wait, then you may manually check for the OTA update. Just follow the steps below.

We suggest you connect to a strong Wi-Fi network to download the latest system software update. This will help you to save the carrier’s data charges. Also, make sure to have more than 70% battery charge on your device. A low battery will hamper the installation of new software on the Nokia 6.1.

Nokia 6.1 is a dual SIM smartphone that is available from April 2018. It flaunts a 5.5-inch touchscreen display with a resolution of 1080 X 1920 pixels. This device from Nokia runs on an Octa-core 2.2 GHz Qualcomm SDM630 Snapdragon 630 processor. The device has two variants with 3/4 GB of RAM and 32/64 GB ROM respectively. In the camera section, the Nokia 6.1 brings a 16 MP camera on the rear end. An 8-megapixel selfie shooter follows it on the front side.

So, those of you have been waiting for the system upgrade, install the Nokia 6.1 Android 8.1 Oreo and enjoy.