HMD Global owned Nokia doing a pretty good job for Keeping its promise. Now the Nokia 6 starts receiving Android 9.0 Pie update officially via OTA. Nokia 6 was launched in 2017 and came with Android 7.1 Nougat operating system out of the box.

However, the Android Pie update for Nokia 6 2017 smartphone not available for all markets yet, Nokia 6 users all over the world might have to wait a few more days. for now, the update rolled out in few markets including Australia, India and Latin America. The Nokia 6 Android 9.0 Pie update weighs around 1.7 GB. 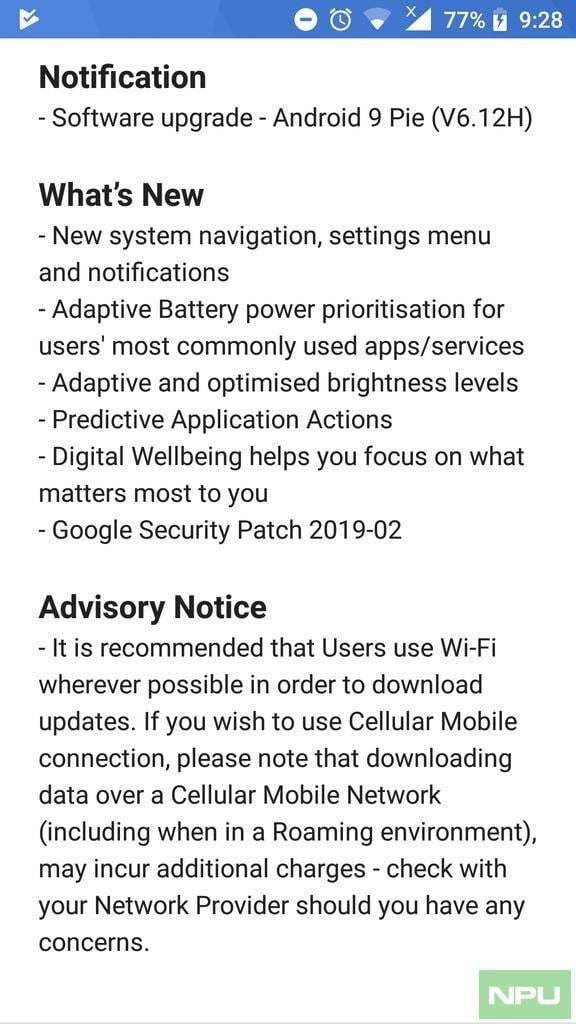 The new firmware update for the Nokia 6 also brings some other features and improvements. The new software update for the phone brings the latest February 2019 Android security patch. It also comes with including Digital Wellbeing, Adaptive Battery Optimization, New System Navigation, among others.

The Nokia 6 came with 5.5-inch IPS display panel that protected by 1080 x 1920 pixels of resolution. The screen of the phone protected by Corning Gorilla Glass 3. The phone powered by Octa Core Qualcomm MSM8937 Snapdragon 430 (28 nm) processor under the hood which clocked at 1.4 GHz. There is an Adreno 505 GPU on board.

The phone is available in 3 GB and 4 GB of RAM and 32 GB and 64 GB internal storage option respectively. It also has a micro SD card slot on board that supports up to 256 GB external storage. It featured with a 16-megapixel camera on the back side with f/2.0 aperture and 8-megapixel selfie camera with f/2.0 aperture. The phone is packed with 3,000 mAh capacity battery inside the body.