Nokia 9 Pureview is the first device to bring the Penta-camera setup in smartphones. The hype that was a mere concept in the initial phase is now a reality with Nokia under the efficient hands of HMD Global. The Finnish OEM’s flagship game has been on-point with the Pureview model. Nokia devices are favorites of users because of the brand name, modern-day hardware, and most importantly best software support. Nokia devices have the advantage of near-stock Android OS, which allows their users to enjoy software update every single month. Here you can get the list of Nokia 9 PureView Software Update Tracker, security patch details, and Download links as well.

The August 2020 security patch for the Nokia 9 PureView is rolling out throughout the globe. As of now users in India and Germany have reported the new update. This one is a basic maintenance update that weighs only 33 MB. It is based on Android 10.

Though it’s a small update still it enhances the security level of the device. So, I advise you should not miss out on this update. It will improve the overall performance of the device. The OTA is already moving through various regions. Maybe in a few days or by the next week, you should receive it on your Nokia 9 Pureview. You will be notified of the update right away when it becomes available. Otherwise, Go to the Settings app on your device and check in the System Update section to see if this new update is available. As it only weighs 33 MB, you can download using your cellular data. Otherwise, you can use WiFi as well.

Nokia 9 Pureview is currently receiving the July 2020 security patch update. It is based on Android 10. The changelog only speaks of the security level upgrade. There is no addition of any new feature or any serious fix. However, as we know Google’s security patches fix up regular bugs and improve the general performance of the device. So, we can expect the same in this latest software rolling out for the Nokia 9 Pureview.

The July update is a global one meaning it should reach all of the Nokia 9 users around the globe. As OTA rollout is incremental, everyone may not get it at once. In the coming days and weeks, all the users should be able to receive the July 2020 security patch for Nokia 9 Pureview. The update weighs only 33 MB. Hence, it signifies that the device is only getting a security update and nothing else.

Today Nokia 9 PureView received a March security patch with a size of 32MB with no major changes except security patch, improved system stability, and UI enhancements. There is no official download link to manually install it on your device. You have to wait for the OTA update to hit your device on its own. Here is the screenshot 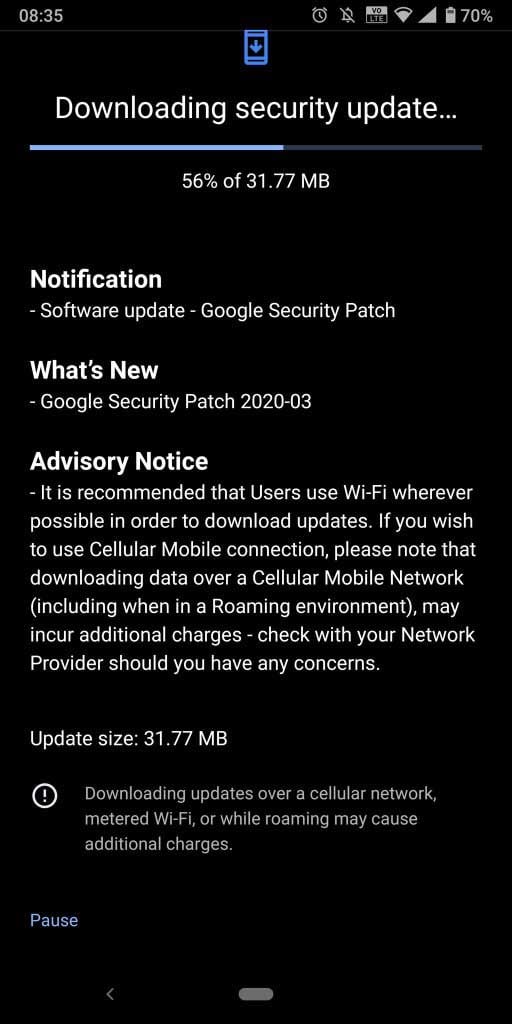 Nokia 9 Pureview is now receiving February 2020 security patch update which weighs around 8.7MB in size. If you have received the OTA update, then make sure you update it quickly. This brings nothing new but the latest patch to secure your device.

The mentioned software is making its way to all the devices over-the-air. it is a global release. As it is an automatic OTA update, users can receive this software in a few days. As an alternative, for those users who want an instant step-up to November 2019 security patch, we have the OTA firmware zip file for them. They have to flash it manually and their Nokia 9 PureView will move on to the November patch. We have put up the installation guide as well for convenience in installing the update.

Let’s talk a bit about the flagship Nokia 9 PureView before we move ahead. This flagship device comes with 6-inches of P-OLED display with Corning’s Gorilla Glass 5 and offers a pixel resolution of 1440 x 2880. Out-of-the-box it runs on Android 9.0 Pie with a guaranteed upgrade to Android 10. A Snapdragon 845 chipset powers up the device. The phone has a Li-Po battery of 3320 mAh with a fast wireless charging of 10W. PureView is only available with a memory configuration of 6 GB with 128 GB of non-expandable inbuilt storage.

The main attraction of Nokia 9 Pureview is its Penta-camera setup powered by Zeiss optics. It has 5 lenses of 12 MP which includes 2 RGB and 3 Black/white camera. This device has various important sensors such as an in-display fingerprint sensor, accelerometer, gyroscope, proximity, compass, and barometer.

Nokia has pushed out the software update which will hit the devices gradually in phases. So, you need to wait with patience for the V4.27G update. We know, a majority of users hate waiting for fo the OTA update. So, here what they can do is try to capture the OTA manually. It’s simple.

Go to device Settings > System > Updates > tap on Check for Updates. If the update is already available in your region, you will see a notification for the same. Also, at the same time, you will be prompted to download and install it. To download the update use Wi-Fi as it will save your carrier data. Besides, make sure that your phone has over 50% of the battery charge.

As we mentioned earlier, if you don’t get your hands on the automatic update or by trying to capture it manually, the last option is to flash the November OTA zip file manually. The installation process is quite straight forward. It s called the ADB sideloading process. We have explained it step-by-step. So, it should not be a hassle for you to perform the installation.

GetDroidTips will not be responsible for any damage to your device if you choose to install the OTA firmware provided in this guide. Follow the installation guide at your own risk.

Now, comes the installation part. Here is what you have to.

That’s it. We can bet it could not get any simpler than this. So, if you are yet to see any automatic OTA update for your device, grab the V4.27G OTA zip and flash it using our guide. If you have any doubts, feel free to ask us. Install the update and level up the security patch on your device.