Following the cancellation of the unveil event on July 11th, Nokia X5 China launch date finalizes once again. The second smartphone in the X series will unveil on the 18th of July. Previously, some images of the Nokia X5 made rounds of the internet while the official release date was set for 11th July. However, due to unforeseen circumstances relating to the event venue, the OEM temporarily postponed the release.

Now, once again the Finnish OEM confirms the new unveil date on its Weibo account. You can see the screenshot of the same below. 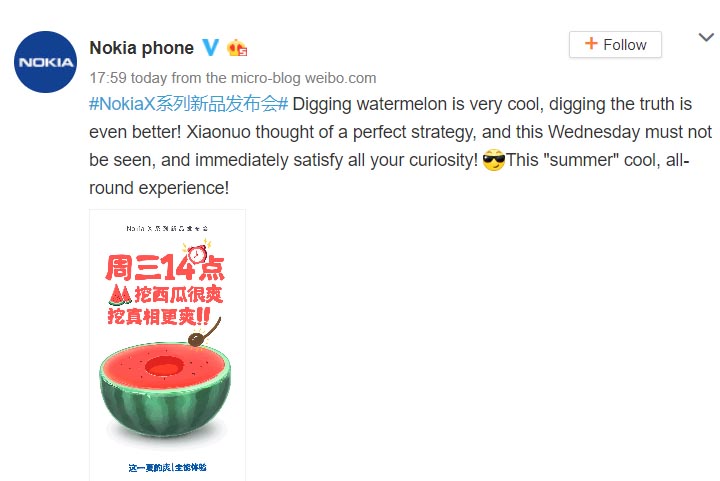 We already know of the specs the Nokia X5 will pack. It will boast of a 5.86-inch screen with 720 x 1520 pixel resolution. There may be three memory variant of 3/4/6GB RAM with 32 and 64GB device storage set-up. We can expect the phone to have two processor variants – a base model with an Helio P23 and a flagship variant with the Helio P60 chipset. In the camera section, 13MP+5MP rear dual cameras will pack up along with an 8MP front camera. Its display will sport a notch and the chin of the device will be quite broad. The Nokia X5 will be the second device in the X series with a notch on the display. The phone has a similarity with the Nokia X6 in terms of look and display.

The cost of the device was earlier made public via a leak. The X5 will cost ¥799 in China which converts to $120. It is very much of a mid-range pricing, so it will suit the pockets of the average buyer.

It’s just a matter of one more day till the Nokia X5 China launch event takes place. Rest of the world may also get their hands on the device which will go by the name of Nokia 5.1 Plus.