Benchmarks are always the best way to find out the specs of any forthcoming smartphone. You almost get the details of the important hardware and software configurations of any device. Recently we saw the images of Nubia Z18s appear on TENAA. However, it did not reveal complete info about the phone. However, Nubia Z18s Specifications Reveal themselves on the latest benchmark listing. Its the Master Lu benchmark which mentions about Nubia Z18s by the model number nx616j. 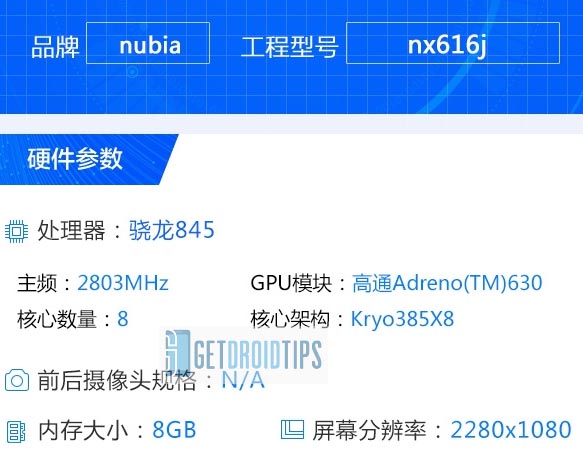 The listing above is from Master Lu. As you can see Nubia Z18s Specifications will bundle a RAM of 8GB with Snapdragon 845 SoC. So, basically, we are looking at a flagship device. It will flaunt a display of 2280 X 1080 pixel resolutions. This means we can expect a Full HD+ resolution and a 19:9 aspect ratio. It will have an Adreno 630  GPU.

In the camera section, we may get a 24 MP +16 MP sensor. According to a few rumors, the Z18s will only have the rear cameras. So, there may be no selfie shooter on the front face. This one may be a bad news for the selfieholics. However, this may also set a trend for future devices. Z18s may be the first smartphone with a 6-inch display but no front camera and apparently no notch.

However, some of these are only speculations and guesses only. We have to wait for the official announcement on the Z18s. Whatever it may be, Nubia Z18s is a flagship entry to the market and will definitely stand apart from its counterparts. ZTE fans will definitely look forward to its release.