The Chinese OEM OnePlus is one of the most popular affordable flagship smartphone manufacturers that easily give tough competition to other flagship-grade devices every year. Last year, the company has launched its flagship lineup devices under OnePlus 7 and 7T. Now, talking about the OnePlus 7T model, it came with premium specifications just like other flagships along with the most latest Android 10 version on top of OxygenOS 10.0.7 out-of-the-box. Now, if you’re waiting for the official Android 11 update then check the OnePlus 7T Android 11 R Status details here.

Google has released the early beta update of the upcoming Android 11 OS (aka Android R). The first Developer Preview was released on February 19, 2020, and the second preview was surfaced on March 18, 2020. It’s available for all the Project Treble supported devices and all the Google Pixel lineup devices (except for 1st-gen Pixel/XL). As OnePlus is also one of the active brands to deliver major Android updates or security patch updates to its eligible devices quite faster, OnePlus 7T users are curious to receive their first major Android update. 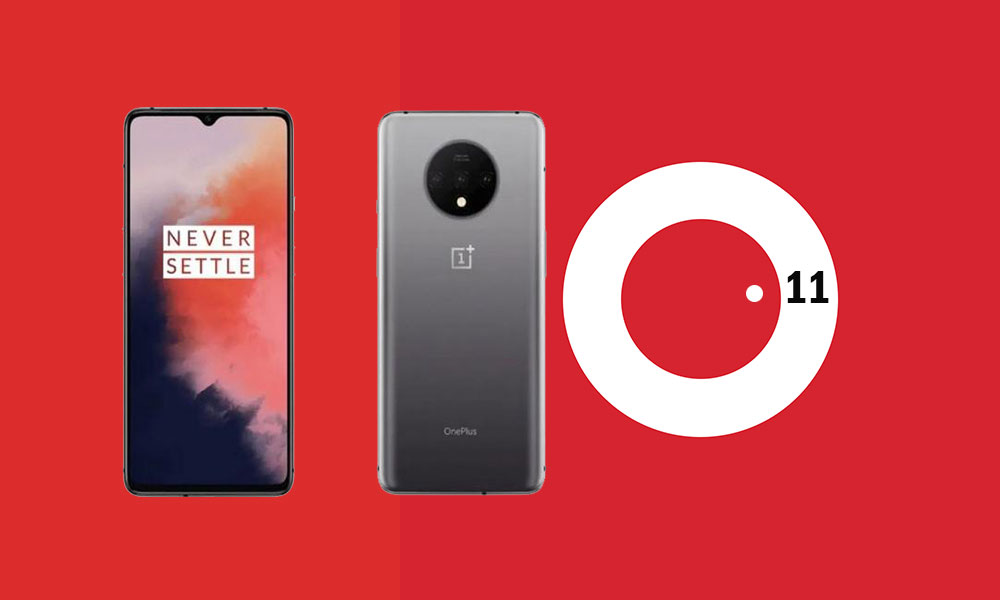 It’s needless to say that the Android 11 (R) is the upcoming latest and the successor version of the Android 10. In another way, Android 11 is the 11th iteration of Android OS that brings a bunch of improved features, system improvements, a more refined user interface, some additional features, privacy & security enhancements, etc.

If you don’t know, the much-awaited Google I/O 2020 event has been canceled due to the COVID-19 pandemic outbreak across the world. So, in these quarantined days or weeks, it’s impossible to hold such a bigger event. However, Google has released two Android 11 Developer Preview beta updates within two months. All the eligible and interested users can download and install this early beta update by searching from here in order to get an early taste of Android 11.

You can check the full changelog of Android 11 features here. While the OxygenOS 11 details can be found here.

Updated on Dec 4, 2020: As the December month has arrived, the impatient OnePlus 7T users are putting several online platforms along with the OnePlus Forum on its toe. Users are literally asking for the OxygenOS 11 or the Beta 10 based on Android 11. Although there is no official release date or month announced yet by OnePlus, we can possibly expect a beta update ASAP.

According to a staff member of the OnePlus Forum, it’ll take time for the developers to release the official major OxygenOS 11 update based on Android 11. It’s quite common for the launch cycle to become longer for the major release. However, a new beta build will arrive pretty soon which has even a half possibility to get Android 11 initially. Till then we have to wait further.

Updated on Nov 18, 2020: So, it’s expected that the OnePlus 7T device users may gonna be able to receive the OxygenOS 11 stable update based on Android 11 by the end of December 2020. We’ll have to wait further to get confirmation on it.

Meanwhile, Android’s custom firmware developers are working really hard to provide the almost exact same user experience to the Android device users by pushing the Android 11 Custom ROM. It’s worth mentioning that the OnePlus 7T is one of them and now users can easily flash the AOSP Android 11 Custom Firmware on their OnePlus 7T model by following this guide.

Those who’re heavily impatient and can’t wait for few more weeks to get the official OxygenOS 11 update over Android 11, can manually install the AOSP firmware to get an early taste of Android 11 (R) which is a really good option.

If we follow the trend of OnePlus in terms of providing the major Android update to its eligible devices, the company starts pushing the Open Beta update at first in Q2 every year. For OnePlus 7T, the Android 11 Open Beta update would also take place in Q2 2020 (April) expectedly.  However, there is no official statement released from OnePlus yet.

However, at the time of writing this article, the Coronavirus outbreak all over the world seems in a hurry and all the developments are either delayed or canceled. So, we may have to for the official OxygenOS 11 update roadmap for the OnePlus 7T once Google releases the Android 11 official stable version in September this year. Therefore, we will need to wait for a couple of months or so.

Till then, stay tuned for more info. If you’ve any queries, let us know in the comment section below.