2018 has been a busy year for Chinese OEM Oppo. Flagship or mid-range, you name it, you’ll find an Oppo phone marking its presence everywhere. Continuing its device release spree, the maker is quite ready with its new phone Oppo F9. It is also called as Oppo F9 Pro. There are lots of reveals and surprises going on. Adding to the list currently, the Oppo F9 Geekbench listing has revealed. It says the device goes by the model CPH1823. 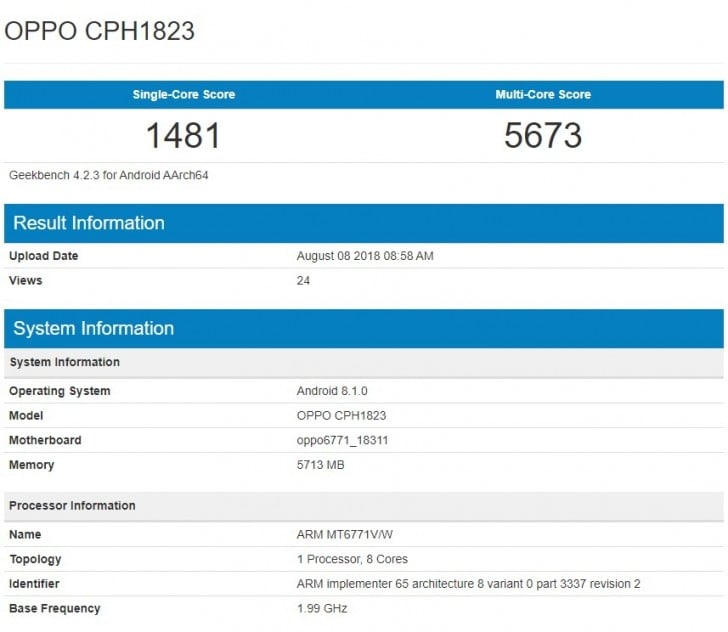 There is confirmation that Oppo F9 will be the first phone to sport the Gorilla Glass 6 from Corning. The glassmakers themselves mention that the first device to will be an Oppo device. However, the device name wasn’t exactly pinpointed. This phone will have a glass back panel with a diamond pattern design.

Oppo F9 will pack a 1.99 GHz MediaTek Helio P60 chipset along with a 6 GB RAM. The mid-range phone will flaunt a 6.3-inch screen with a very small notch which has a v-shape. On the notch, a 25 MP selfie shooter will reside. The rear camera setup will bring dual lenses which may be of 16 MP + 2 MP. If this happens then it will first such set-up for the Oppo F-series.

As of now, there are lots of reveals already circulating the interweb. Now the Oppo F9 Geekbench Listing also makes an appearance, so, we can say the release may happen very soon.