A Chinese smartphone company, Oppo going to unveil its new smartphone on August 15 in Philippines and Indonesia markets. Now, the company’s official Oppo India Twitter account confirmed that the Oppo F9 Pro coming to India on August 21. There are speculations the Oppo F9 pro may a renamed version of the Oppo F9 which will be going to launch on August 15 in some markets. The Official Oppo India Twitter account released a video teaser of the upcoming smartphone and confirms some features and launch date of the phone.

According to the promo video, the F9 Pro will come with water drop notch design on the top of the display. In the video, there are three color gradient variants such as Twilight Blue, Sunrise Red and Starry Purple. On the back side, there are vertically placed dual camera sensors and a fingerprint scanner present. The video also reveals that the phone will have VOOC fast charging technology feature and the phone can be charged for 2hours battery life in just 5 minutes. 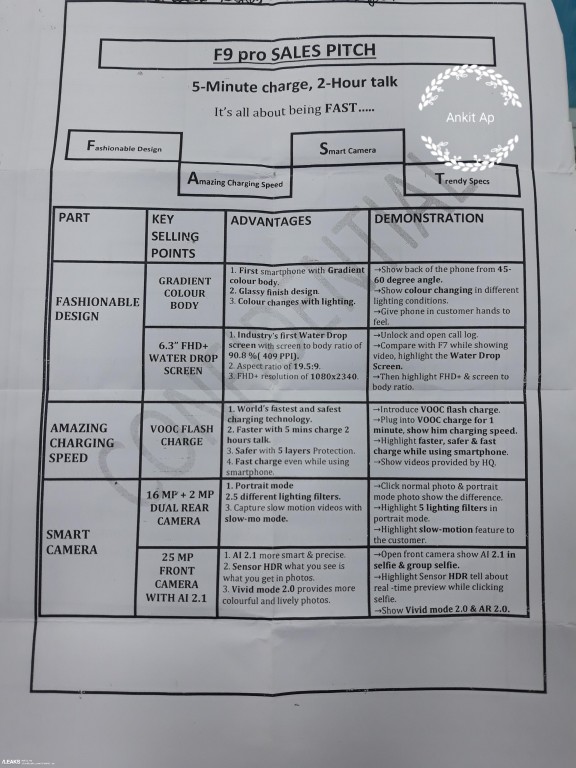 Now a fresh sales pitch leaked revealed the specs of the F9 Pro smartphone. There are two images leaked one with main specs and the other with reasons to buy the F9 Pro. The phone comes with Gradient Color back panel which changes color when putting the light from different angles. The F9 Pro will come with 6.3-inch water drop screen display that supports 1080 X 2340 pixels of resolution and offers 19.5:9 aspect ratio. The phone will support 90.8% screen t body ratio and 409 PPI density. 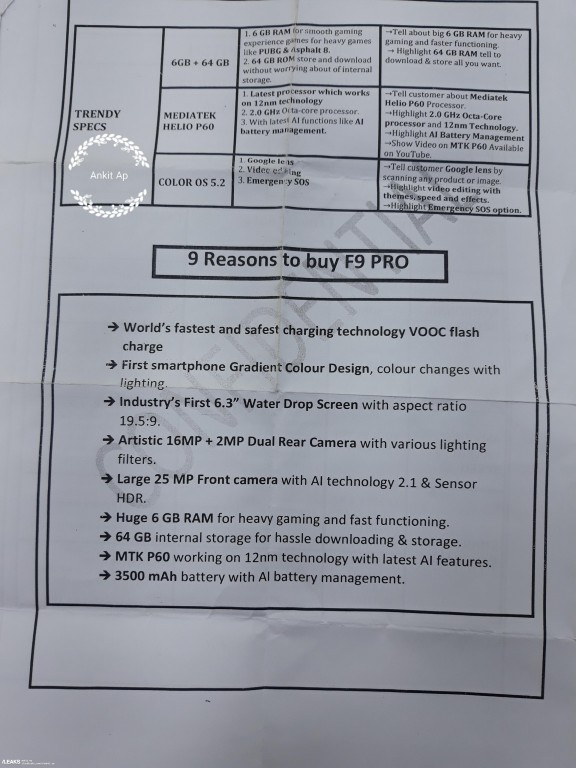 Oppo F9 Pro will have 6 GB of RAM and 64 GB internal storage option on board. The phone will feature dual camera sensors on the back side, 16-megapixel main camera and a 2-megapixel secondary camera. The phone will also come with portrait mode support, slow-mo videos. It will have a 25-megapixel front camera for selfies and video calls.

The F9 Pro will power by Octa-Core CPU under the hood which clocks at 2.0 GHz along with Helio P60 chipset. Inside the body, the phone will have 3,500 mAh capacity battery with the company’s VOOC flash charger. The will run on Android 8.1 Oreo operating system out of the box along with Color OS 5.1 UI running on top.